State Sen. Don Cravins is seeking to do the impossible - overtake an incumbent member of Congress, Lafayette's own Dr. Charles Boustany. If you believe the polls, he has a fighting chance. 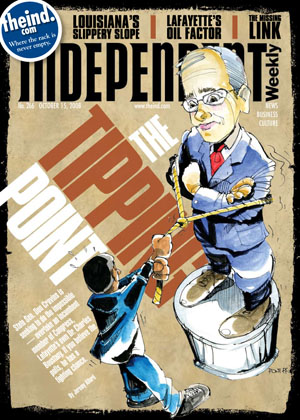 If you had Charles Boustany and Don Cravins stand side by side, you would be hard pressed to mistake one for the other. Boustany, 52, sports a delicate build, wire-rim glasses and has a soft demeanor of confidence that retired physicians tend to have. He also shows his age, with a balding head of gray hair — no doubt an attribute brought about by two terms in Congress, where he serves alongside hordes of other rich, white men. In contrast, Cravins, 37, is a broad-shouldered, part-time copper whose quick wit — no doubt sharpened by the old timers in the state Senate — and down-home appeal transverse well from his African-American roots in Acadiana to the hallowed halls of Baton Rouge.

But for all of their physical discrepancies, these men, the top two contenders vying for the 7th Congressional District, are much more alike in ideology than their party affiliations and outward appearances suggest. Boustany is pro-gun and against higher taxes. So is his challenger. Cravins is a devout Christian and against abortion. So is the congressman. In fact, the labels of Republican (Boustany) and Democrat (Cravins) are among the few things helping to separate one politician from the other. For whatever it’s worth, the two men do support different candidates for president — predictably along party lines. Yet even that area of political principles shows fault lines.

When it comes to GOP nominee John McCain and Democratic superstar Barack Obama, Acadiana’s congressional candidates aren’t pulling any punches. Boustany is quick to point out that McCain’s health care plan “doesn’t go far enough.” Cravins, for his part, thinks Obama is too wishy-washy on oil. “I am for drilling off the coast of Louisiana,” Cravins said during a debate in Lake Charles last week, before adding that Obama should follow suit. The Obama Factor is, of course, at play in the 7th Congressional District, as it is everywhere else. For Cravins, it’s a fine line. He certainly wants to benefit from the increase in voter turnout that Obama is expected to draw (some analysts anticipate an equally large anti-Obama response, too), but being linked to the Democratic nominee could prove troublesome for his campaign’s strategy of wooing crossover white votes.

On the other side of the fence, you won’t find much commitment from Boustany, either, who is at best lukewarm on McCain. That’s probably because Boustany had another horse in the race during the presidential primaries: former New York Mayor Rudy Giuliani. It was an odd choice, considering Giuliani is pro-choice, pro-gay rights and pro-gun control — everything Boustany is not. That’s especially dangerous for Boustany, whose Acadiana swing district traditionally doesn’t share the same social priorities as Giuliani. At the time, in his own press release last year, Boustany made sure to point to other issues that Giuliani was campaigning on: “As a Republican and a conservative, I know Rudy Giuliani is the best choice to be the next president. On the most important issues of ensuring our national security and protecting our families, keeping taxes low and making government more efficient, Mayor Giuliani’s record speaks for itself and his leadership is exactly what we need in the White House.”

The conservative base in Louisiana, particularly pro-life forces, does not budge on abortion issues, says Rev. Gene Mills, executive director of Louisiana Family Forum, an epicenter for Christian public policy work. It could potentially hurt Boustany in the election booth. “It is very challenging for many in the pro-life ranks to see outside of those beliefs,” says Mills. “It’s just so fundamental. It’s what the family forces stand for. But then again, Congressman Boustany has been a stalwart on his [pro-life] votes. We’ll just have to wait and see. Just remember, though, that Cravins has also been a [pro-life] stalwart on the local and state level.”

Positioning aside, Boustany entered this re-election contest with a significant statistical edge. After all, he is the incumbent. The success rate of U.S. House members seeking re-election is usually 95 percent or higher, according to the University of Virginia’s Center for Politics. In short, it’s normally safe for incumbents to come out and play. But, just like the ideological match-up of the candidates, there are indications that this isn’t just another race of incumbency versus change.

A poll recently commissioned and released by the Louisiana Democratic Party suggests the race will be closer than anyone predicted at the turn of the year. The Zata 3 survey shows the two candidates in a “statistical dead heat with informed voters” — Cravins: 37 percent; Boustany: 36 percent. While the state party is cheering these numbers and referring to the poll as a “gold mine,” they are not releasing the cross-tabs or discussing specifics. “It seems to me that if you had a poll that showed your candidate overtaking an incumbent you would want everyone to see it,” says Pearson Cross, an assistant professor of political science at UL Lafayette.

It could be that Democrats are more worried about another set of numbers — fund raising. Boustany, not surprisingly, has finally figured out that a seat in Congress is like owning a mint. During his first few years, Boustany was among the poorest fund-raisers in the state delegation, but he has really picked up the pace. He has $744,000 in the bank ready to spend on whatever is needed. As for Cravins, his most recent complete filing with the Federal Elections Commission revealed only $45,000 in cash-on-hand. While Boustany’s camp says its numbers speak for themselves, Team Cravins says not to take the figures too seriously. “Our cash on hand isn’t that important,” says Richard Carbo, spokesman for the Cravins campaign. “Boustany has been raising money since 2006 for this race, and we’re spending every dollar we get weekly and daily on aggressive media buys.”

UL’s Cross maintains that Cravins’ only defense is a solid ground game, meaning canvassing and volunteers, and Carbo says volunteers have knocked on 20,000 doors. While that’s impressive, Cross says the ground strategy will be particularly difficult in Acadiana, where there are both urban and rural pockets. “The money may be an insuperable obstacle for Cravins,” Cross says. “That’s the advantage of being an incumbent, and it’s unlikely that Cravins will be able to overcome that.”

That money is major issue in this race isn’t shocking. It’s even seeped into the top issues. On coastal restoration Boustany and Cravins have attacked each other for not doing enough to bring coastal restoration and hurricane protection dollars to south Louisiana, although both men have strong voting records on those fronts. Boustany says the Legislature, Cravins included, spent too much time “dilly dallying around” instead of finding state money to match federal shares for coastal projects. Cravins, meanwhile, says Congress, Boustany included, has been too busy spending money on questionable bailouts when it should have been bolstering Louisiana’s coastline.

Boustany originally opposed the recent $700 billion financial bailout approved by Congress and signed by Bush two weeks ago, but later voted in favor. Cravins, who opposed the bailout, says the decision doesn’t sound like something a fiscal conservative would do. “[Boustany] now leaves our children and grandchildren in a precarious position to repay the debt of the Wall Street moguls he has let run wild,” Cravins says.

In a prepared statement, Boustany admitted the bailout wasn’t “perfect,” but something had to be done to “help southwest Louisiana [keep its] jobs.” Boustany has also received a slew of financial contributions from companies directly linked to the nation’s credit and housing controversies — $1,000 from Citigroup, $2,000 from the Securities and Financial Markets Association and $4,000 from Sallie Mae, just to name a few.

The two candidates have also crossed swords on earmarks. In particular, Cravins has slammed Boustany for not being more aggressive in obtaining the so-called pork-barrel spending, especially in the wake of Hurricane Rita in 2005. In his own defense, Boustany says he is trying to reform the system by staying away from most earmarks and chastising those who rely upon them because they are often doled out in secretive ways as political favors with little or no justification. For what it’s worth, each candidate’s response to Rita has become a topic of discussion as well, with Boustany depicting himself as an elder statesman in D.C. and Cravins describing himself as a part-time law enforcement agent who was working on the ground during the crisis. Of course, each blames the other for not doing enough.

If there’s one thing Boustany has done on the Hill, it’s making friends with cash-filled Political Action Committees, or PACs. His recent campaign finance reports reveal it truly is good to be the doctor, as evidenced by the tens of thousands of dollars donated by physician-friendly PACs like the American Academy of Family Physicians, Neurology Professional Association, Physician Hospitals of America, Pfizer, American College of Surgeons and many others.

Boustany’s reports also show close connections to Republican families, like the Chouests of Lafourche Parish. Five members from that family gave Boustany a combined $11,200. He also has monetary support from Lafayette’s elite, like attorney Clay Allen, one of the founding members of the ethics-minded Blueprint Louisiana; Bill Fenstermaker of Fenstermaker & Associates; and Richard Zuschlag of Acadian Ambulance — just to name a few.

As for Cravins’ finances, what jumps out immediately is the overwhelming support he’s received from the Democratic establishment — $5,000 from Jazz PAC, the leadership fund of U.S. Sen. Mary Landrieu; $4,000 from U.S. Rep. Charlie Melancon, Acadiana’s other congressman; $2,300 from state Senate President Joel Chaisson; and $230 from former Gov. Kathleen Blanco.

Cravins has also received at least $2,300 from video poker interests and $2,000 from Congressman Charles Rangel, a New York Democrat under fire for unreported income on a vacation home in the Dominican Republic, sending out congressional stationery for personal matters and his use of three rent-stabilized apartments in his home district of Harlem. Other donations show where Cravins might be able to build coalitions as a member of Congress — he received $5,000 from the Congressional Black Caucus and another $5,000 from the Blue Dog Caucus, which is made up of fiscally-conservative Democrats like Melancon.

But money does not make the man. Well, at least not entirely. Running for Congress changes that equation a bit, as both Boustany and Cravins know. Money will be needed if either candidate wants to pull the building momentum his way. If Cravins wins, he’ll be credited with not only knocking off an incumbent, but also with becoming the district’s first African-American congressman in modern history. If Boustany wins, he’ll take one more step in securing his control over Acadiana. This political dichotomy offers contrary fates for two men who are chasing the same electorate in the same fashion — the only difference is, for one of them at least, the chase will end in less than a month.