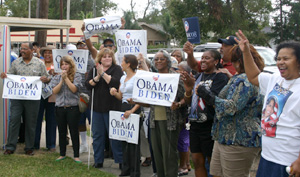 Emblazoned with a big blue cutout image of the bayou state and the slogans “Louisiana for Change” and “Turn the Bayou Blue,” the bus that is the Change for Louisiana Tour rolled into Lafyaette yesterday. Organized by the state Democratic Party in support of presidential candidate Barack Obama, the Change for Louisiana tour kicked off Wednesday in Baton Rouge and wraps up in Oct. 21 in New Orleans. State officials riding the bus for Obama include New Orleans state Rep. Karen Carter Peterson, who chairs the Obama campaign in Louisiana, as well as Democratic Party state chairman Chris Whittington, state Rep. Regina Barrow and local state Rep. Rickey Hardy. A crowd of some 50 people, including several elected members of the parish Democratic Party and newly-elected school board member Shelton Cobb, were on hand to greet the tour for a brief rally. Despite poll numbers that have shown Republican John McCain about 10 points ahead of Obama in Louisiana, officials who spoke at the event told the crowd that Louisiana could go for Obama, prompting chants of “Yes we can” and “Yes we will.” Obama himself has not visited Louisiana since securing the Democratic Party’s nomination. “He’s here in spirit,” local Democratic Parish Excecutive Committee member Frank Flynn told me.