This year’s weirdest Halloween costume comes from a pair of 23-year-old Lafayette entrepreneurs. 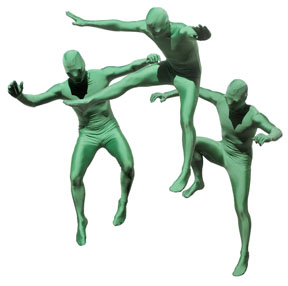 Not everybody who watches It’s Always Sunny in Philadelphia is a slacker. Take Colin Grussing. He was slouched on the couch with his college buddy Jesse Faulk watching the offbeat FX hit on a Thursday night, laughing at the most vain, dysfunctional, self-obsessed friends on TV. It was the episode where Frank (played by Danny DeVito) puts acid in Charlie’s beer while he’s trying to watch Dennis, Mac and Dee try out for the Washington Redskins. A few minutes later Charlie shows up in a stretchy, virulent green body suit, reprising his roll as the most embarrassing high school mascot ever.

“The first time I saw it, I thought Jesse would really enjoy wearing it,” says Grussing, who graduated from Episcopal School of Acadiana in Cade with Faulk. “I figured he’d like to have it for Halloween.” Grussing searched online, but all he could find was one other person who was also looking for the body suit. A light bulb went off. “I’d been looking for a way to make money without working for an hourly wage,” says Grussing. “Buy something, sell it for more, sounded good.”

Then he really did do some work, surfing the Internet for hours until finally, in a YouTube video, he found the proper name for the outfit, made by a Chinese company. Grussing ordered 15 suits, created the Web site begreenman.com and waited for the orders to roll in. Those first 15 sold out in 24 hours. He ordered 200 more and sold them within a week.

Meanwhile Faulk has been making appearances all over Lafayette to drum up business — at the Blue Moon Saloon, Wild Salmon, The Bulldog, and Festivals Acadiens. Orders piled in from across the country, and now 2,000 people are on a waiting list for the suit. With Halloween approaching, Faulk’s hopping on a plane bound for China for another shipment. He’ll courier them back to the U.S. and get them in the mail in time for Halloween.

After pumpkin season, will the pair be able to continue selling from the sofa? “We’re going to get them in other colors to market to crazy sports fans,” says Grussing. Imagine the Superbowl ads this year.

For more info on the Green Man suit, go to www.begreenman.com. To watch back episodes of It’s Always Sunny in Phidelphia, go to http://www.fxnetworks.com/shows/originals/sunny/#/home and look for The Green Man episode titled “The Gang Gets Invincible.”