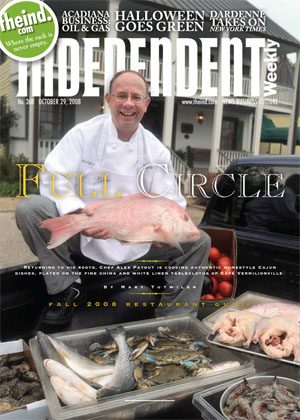 Alex Patout was born in the food business. The Jeanerette clinic where he came into the world was right upstairs from his grandpa’s Main Street store, Pop Bolner’s Grocery. Patout grew up playing between the sacks of coffee and cornmeal in the store and eating the crawfish étouffée and bisque his uncle Gerald and dad, Gene Patout, cooked for their New Iberia restaurant in the historic Frederick Hotel. “I didn’t know it was anything special,” Patout says of his childhood meals. “Gumbo was just what we ate at home.”

Fortunately for the food world, Patout’s home-schooled cooking education translated into a series of restaurants, accolades, awards and a cookbook that launched him into the national consciousness. By the early 1980s, Cajun was cool with Patout one of the hottest new chefs in the country. From his base, Patout’s in New Iberia, to French Quarter and Northshore destination restaurants, he brought a style of Cajun country cooking to an audience hungry for the twists on flavor he could execute with crawfish, tasso, eggplant and duck.

The Iberia Parish native has been cooking in exile for more than 20 years, but four months ago, he found his way home, to the kitchen of Lafayette’s Café Vermilionville. His mission is to infuse Café V’s haute menu with more Cajun-inspired cooking, harmoniously wedding the best Acadiana has to offer with the tenets of fine dining. Imagine authentic crawfish bisque, country braised duck and seafood rich eggplant dressing, paired with a glass of fine white burgundy or vintage bordeaux, served in the elegant garden room of the renovated 18th century inn. It’s a concept Lafayette has been lacking. Patout and Café V intend to fill the void.

At the beginning of his career, Patout had no intention of becoming a chef. He was a business major at UL Lafayette in the mid-1970s. “What got me interested in cooking,” he says, “is when I’d bring my friends home and how blown away they were by my mom and dad’s food.” He hadn’t even paid much attention to all the cooking going on around him. So when he decided to open a restaurant, he had to learn how to cook. And he went about it backwards. “The concept I actually knew was what the dishes should taste like. What I had to figure out was how to take something that my momma would cook for four hours and put it into a commercial setting — bring it to the peak of flavor and get it out in 10 to 15 minutes.”

Patout and his sister, Gigi, opened Patout’s on Nov. 3, 1979, in New Iberia. There was nothing like it in the area, where local restaurant menus were dominated by fried and boiled seafood. Patout took flavors in unexpected directions. He reduced heavy cream to the consistency of molasses, then flavored it with chunks of tasso and crawfish tails, tossing the sauce over pasta. His eggplant pirogue was stuffed with eggplant dressing loaded with lump crabmeat and shrimp. The Ladyfish, a Patout signature dish, was fresh redfish from Vermilion Bay, in a delicate lemon butter sauce with lump crabmeat. Most dishes were invigorated with a healthy dose of cayenne pepper, enough to make Cajun palates happy.

Patout’s drew diners from all over Acadiana, but what happened next was totally unexpected. Paul Prudhomme and his French Quarter restaurant, K-Paul’s, had become the darling of the national food scene, and food writers from bi-coastal newspapers and slick magazines descended on New Orleans. Prudhomme fed them his city version of Cajun cooking, then sent them to the country, to eat at Patout’s. Alex took big city food writers on a tour of Cajun country, showing them his larder: shrimp docks, oyster luggers, smokehouses and truck farms. He was featured in food sections from Los Angeles to New York. By 1984 he was named one of the “Best of the New Generation” by Esquire. “I was on the page right between Meryl Streep and Julius Erving,” he says. The same year, Food and Wine tapped him, along with Emeril Lagasse, as one of the Ten Top New Chefs in the country. Random House commissioned a cookbook. The next year, he opened Patout’s in the Maison St. Charles Hotel in New Orleans. By 1988 he had a stand alone restaurant, Alex Patout’s Louisiana Restaurant, on Royal Street in the French Quarter.

Everything was going along swimmingly until the terrorist strikes of Sept. 11, 2001. “Business slowed down tremendously,” says Patout. In 2002, he moved into another building, across St. Louis from Antoine’s but wasn’t happy with the location. Simultaneously, he opened a second restaurant in a historic building in old Mandeville. Within six months it burned down; Patout rebuilt, but then Katrina hit in August 2005, shuttering both restaurants. Patout found himself working as a chef in Christabelle’s Quarter in Coconut Grove, Miami, but his heart wasn’t in it. He moved back home to New Iberia and started looking for a job.

This summer he hooked up with Café V owner Ken Veron, and within four months became the executive chef. “My mission is to make Café Vermilionville into one of the finest dining experiences in Acadiana,” says Patout. “But I want to do it through the experience of authentic Cajun heritage dishes.” Patout has been working with the menu, edging country dishes in between the Filet au Poive and the Veal Marsala. He put a classic shrimp remoulade back on the appetizer menu and makes crawfish bisque the way his grandmother did — by boiling the crawfish, cleaning out the heads and stuffing them, brewing the deep brown broth stocked with a pond’s worth of tails and serving the soup as the grandest of old school dishes. His seafood loaded eggplant dressing, fresh soft shell crabs napped with tasso cream sauce, grilled fish topped with jumbo lump crabmeat in a sauce enriched with crabfat, and a dish locals have been pining for since Didee’s in Opelousas closed down — the slow braised duck — are all starring on Café V’s menu. Patout is also planning a showcase for Louisiana’s stellar oysters.

“I feel blessed that everything worked out,” says Patout. So do we.