A proposed new regional tourism board sparks a round of Acadiana parish infighting and angers some New Orleans legislators. 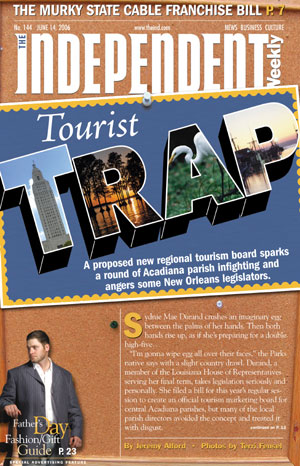 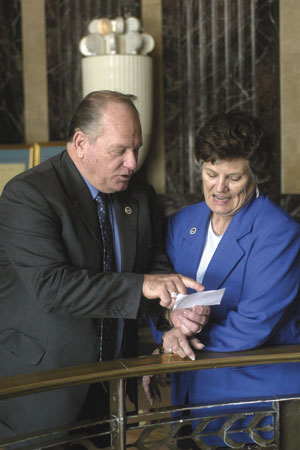 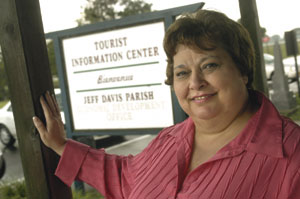 Sydnie Mae Durand crushes an imaginary egg between the palms of her hands. Then both hands rise up, as if she's preparing for a double high-five.

"I'm gonna wipe egg all over their faces," the Parks native says with a slight country drawl. Durand, a member of the Louisiana House of Representatives serving her final term, takes legislation seriously and personally. She filed a bill for this year's regular session to create an official tourism marketing board for central Acadiana parishes, but many of the local parish directors avoided the concept and treated it with disgust.

Seemingly defeated, Durand turned to her legislative bag of tricks. She serves as a committee chairperson in the Legislature and knows a bill can have nine lives. She re-introduced it as a resolution, and it now includes only three of the parishes in a slightly watered-down version.

"When this thing gets started," Durand says while smearing the imaginary egg against the air, "they'll see what it is, and they'll want to join."

That's highly unlikely. Most Acadiana tourism directors and lawmakers have disavowed the marketing proposal. They agree a regional approach is great in theory, but it's already being done on some levels and getting everyone on the same page is easier said than done.

Some of the outlying parishes fear Lafayette will get all the money and dominate the agenda. Others opposing the approach are just too parochial to share the stage with another parish. And many believe certain aspects of the plan have merit, but the plan as a whole is flawed.

Durand and other proponents remain undeterred. They want to market Acadiana as an alternative to New Orleans during this period of rebuilding. Financial backing from the Department of Culture, Recreation and Tourism has been lukewarm, and some Crescent City officials have reacted angrily to the plan's marketing campaign.

The surviving resolution was pending a hearing in the Senate at press time, with little more than a week to go until adjournment. Even if it fails, the regional tourism debate offers an inside glance into Acadiana politics.

Durand's proposal is no flash in the pan. Whenever there's a gathering of Acadiana tourism professionals, her initiative dominates discussion. "Every time we get together, we end up talking about this," says Sarah Klumpp, director of the Jefferson Davis Parish Tourist Commission, who opposes the plan.

Freddie DeCourt, the mayor pro tem of New Iberia and the catalyst behind the regional proposal, says regionalism is not a dirty word. He wants to tap into the steady stream of buses that travel to New Orleans to visit some of the same things that can be found in Acadiana ' museums, antebellum homes, ghost stories, good food, indigenous music and culture.

"We need a way to link up by interest and locale," he says. "While this transition is going on, we promote New Orleans as a day trip to people making long visits, and when they are up and running again we will become the day trip."

In response to that strategy, Durand filed legislation to create the Central Acadiana Tourism Development Commission on the state level. It included Acadia, Iberia, Jefferson Davis, Lafayette, St. Mary, St. Martin, St. Landry and Vermilion parishes. Eight members selected from the region would serve as unpaid advisors, although they would have had the authority to sign contracts on behalf of the region.

The gig came with perks as well; members could "seek, accept, and dispose of gifts, bequests, or donations of money, personal property, or services received from any source," according to the legislation.

A fiscal analysis conducted by the Legislative Fiscal Office predicted the new board ' which would have operated under the Departure of Culture, Recreation and Tourism and required office personnel and administrative and operational expenses ' would cost taxpayers nearly $1 million over the next five years.

That was only one of the problems facing the bill earlier in the session. It had not been properly advertised in all of the official journals around the region, as required by law. Durand instead filed a non-binding resolution that has no legal authority, but she vows that it will be enforced.

When it came up on the House floor for debate, several parishes were amended out of the measure until the name had to be changed to the Tri-Parish Tourism Development Advisory Commission and included only the parishes of Lafayette, Iberia and St. Martin.

DeCourt's still pleased despite the significant changes. "It's a start," he says.

Angelle Davis, secretary of the Department of Culture, Recreation and Tourism, says her boss never committed any funding to the drive and that the department is largely focused on its national marketing campaign to revive New Orleans. "We have agreed to work with her on this, though," Davis says, adding cooperative opportunities are available where the state would pay a portion of marketing costs.

Durand smiles wryly at the news.

"I guess that's because [Landrieu] didn't get elected [mayor of New Orleans]," she says with a laugh and a nudge. "We'll just have to do it on our own." Durand was already considering using some of the local hotel-motel tax money from each parish, which is traditionally used for tourism needs.

Gwen Hanks, executive director of the Acadia Parish Tourist Commission, says her group already has to battle its police jury for their share of the hotel-motel tax, and creating a regional consortium that draws from those monies would be a replication and a headache.

"I can read between the lines," Hanks says. "We're already the red-headed stepchildren. The police juries [or parish councils] own us. We can't make many decisions without them. And the grant funding has dried up due to the problems from the storms."

Gerald Breaux, director of the Lafayette Convention and Visitors Bureau, never had the impression that parish dollars would be needed for the commission or campaign but supports the creation of a regional board ' no matter the size ' if it boosts visitor numbers and doesn't drain local accounts. Breaux thinks it's a smart strategy on paper because approximately 60 percent of tourists to Acadiana are on their way to New Orleans, so the reverse plan just might work.

"If this will allow us to bring in more money to Lafayette, then open up the bank and let it come in," he says.

Durand says money is the driving force behind the opposition, which doesn't want to share funds.

"If one [parish] wants a sucker, they all want a sucker," Durand says. "But when it comes time to pay up, no one has money for the sucker."

Mickey Frith, a Vermilion Parish democrat who chairs the Acadiana Delegation in the House of Representatives, says it is "extremely hard" to get the region's parishes together on any issue, even if there are financial implications at stake. "Everyone is too proud," he says.

Klumpp agrees and says the outlying parishes worry that a collective strategy will result in Lafayette overshadowing them. "That was one of our major concerns," she says. "We don't want to lose our identities."

Rep. Kenneth Eric LaFleur, a Democrat from Evangeline Parish who supports the concept, says Lafayette taking over the show is still an ever-present theme when the parishes get together for discussions. It's important to remember that there is more to the region than just that one parish, he adds.

Another reason some parishes reject the regional approach is because there is a wealth of regional cooperation already going on, according to Breaux. For instance, Acadiana's cities and municipalities often make media buys as a group. "We all support each other when needed," Breaux says. "Tourism doesn't know where one parish line begins and another ends."

Which is why Davis says the proposed board would be a "duplication of services," since there is already a tourism commission on the state level, as well as in nearly every parish. Hanks, who personally lobbied lawmakers to defeat the original Durand bill, says that is a valid argument that's been downplayed in this debate.

"Why do we need another board?" she asks. "When a sister parish needs something, we just do it. We don't need another layer of bureaucracy telling us how to do it. We already do it on our own."

Breaux has been in the tourism industry for more than 25 years and says reluctance to change is normal. It's possible the parishes don't know what to expect because a formalized regional approach with a governing board has never been attempted.

"There's always fear of the unknown," he says.

The main thrust of the proposed marketing commission is the message. Durand wants Lafayette to be presented in an advertising campaign as an alternative to New Orleans while the Crescent City struggles to rebuild.

"Just whack," is how one New Orleans lawmaker who requested anonymity due to the sensitivity of the situation described that message.

Charmaine Marchand, a House Democrat from New Orleans, isn't thrilled with the implication, either, especially with Hurricane Katrina fresh in the minds of the world. "That is bold," she says. "There is absolutely no municipality out there that can be a substitute for New Orleans." Democrat Juan A. LaFonta from the same delegation says the proposed marketing campaign sends the wrong message, especially to countless Louisianans trying to put the pieces of their lives back together.

"I don't want to sound off to the rest of the nation and tell them that New Orleans is not a viable place for tourism," he says. "The main tourist area ' the French Quarter ' is open. Restaurants are open. The aquarium is open. My interpretation of this marketing campaign leaves me to be concerned."

Durand claims the underlying strategy is to help New Orleans get back on its feet. "New Orleans will always be the major destination in the state," she admits. "But if we can show them that a few miles down the interstate there is something just as exciting, we should do that."

DeCourt concurs and says the message is not about taking advantage of New Orleans. "I just felt this would be a way to promote both areas," he says.

Lafayette accountant Joel C. Robideaux, the only Independent in the state House, says Acadiana has all the ingredients for a vibrant marketing campaign ' culture, food, fun ' and the state should consider such a move before dismissing it. But it's important to keep the message positive.

"If it brings more people into Louisiana, then we should consider it," Robideaux says.

Looking toward the future, Breaux says there needs to be more of an emphasis on a statewide approach that pulls the regions together and still gives flexibility for local strategies. For instance, Breaux says marketing and tourism can be done with several parishes under one umbrella, but conventions and sporting events would have to be treated separately since they are location-specific.

Democratic Rep. Wilfred T. Pierre has represented Lafayette for more than 12 years and says regional promotion is a logical step. "The more the merrier," says Pierre, who supports the tri-parish concept. "I wholeheartedly endorse cross-marketing the region with New Orleans."

As for Durand's political future, there's speculation that she's eyeing the Senate seat of Craig Romero, the term-limited Republican from New Iberia running for Congress. Local chatter also says DeCourt is helping Durand use the regional board concept as a soapbox to prepare for the run.

DeCourt says he's "naïve" to such matters but doesn't deny the strategy. "She is already involved up here, working on local projectsâ?¦ Certainly it doesn't hurt her chances," he says.

"Just leave us alone," she says.