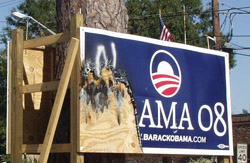 Three weeks ago, Bill Goode erected a Barack Obama campaign sign in front of his law firm's office on Johnston Street. The two-sided, 4x8 sign faces both lanes of traffic on Lafayette's busy four-lane street. About a week after it was erected, Goode says someone tried to smash the sign with a rock. A week ago, a vandal spray painted the letter "N" over the letter "O" in "Obama."

"I think this is just the intolerance of the right wing," Goode says. "You see it all over the place now. I'm not even a liberal. I'm a registered independent. I belong to the NRA. But when people criticize McCain or Palin then it's called political diatribe, and you're called un-American. But when they say bad things about Obama and Biden, it's just fine. It's a two-sided approach to the First Amendment now."

Last night, someone set Goode's Obama campaign sign on fire. One side is charred, and four of his five American flags were burned and destroyed. The Lafayette Fire Department managed to put the fire out before the entire sign burned. Goode has no intentions of repairing the sign and plans on adding 10 more flags to the display.

"I want people to know that there are people in our community who have no respect for the rights of others and what they think, and that's kind of scary," Goode says. "If they want to deface my property and my right to have my opinion, I want other people to know that those kind of folks are out there. They're trying to intimidate me and other people, and it's not going to intimidate me."

"The bottom line is that this is America," he adds "and we all have a right to our political beliefs and to voice our opinions. That's what America's all about. But there are just some people out there who don't think that way anymore."