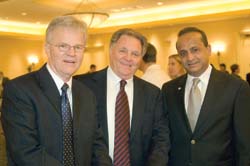 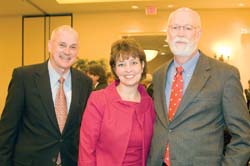 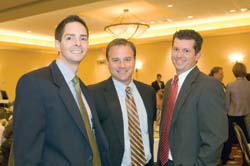 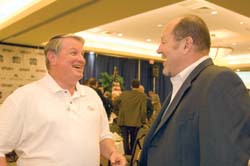 Howard Chaney of Copy and Camera and LCG’s Keith Thibodeaux

Is the glass half full or half empty? In Lafayette, it’s half full and hopefully holding steady until about 2010 when it will begin filling again — that’s the opinion of the state’s top economist, LSU professor emeritus Loren Scott, and Louisiana Secretary of Economic Development Stephen Moret. Both spoke at The Independent Weekly/Acadiana Business’ 5th annual Entrée to Business Luncheon sponsored by Dwight Andrus Insurance and MidSouth Bank, with support from Vidox.

Despite the bleak and volatile economic outlook worldwide, not to mention the losses so many local people are suffering with the stock market decline, both men were high on the possibilities right here in Lafayette. The crowd at the Hilton included movers and shakers representing diverse segments of the Acadiana business community — from publicly traded banks to small business owners, from retailers to real estate professionals — all of whom mulled over the national downturn and how it affects us.

Moret gave kudos to the state’s real estate market, saying Louisiana has one of the healthiest housing markets in the country, and Scott noted that 97 percent of the banks in Louisiana have an excellent rating and should remain strong not what the recession brings.

Scott’s assessment was affirmed by bankers who attended the luncheon in large numbers. “Louisiana banks are fortunate,” says former Gov. Buddy Roemer of Business First Bank. “We haven’t had the excessive real estate bubble that Florida, California and Nevada have enjoyed. We’ve had our ups and downs, but they aren’t as big as the rest of the country.”

“These are self correcting moments,” Roemer says. “We’ll get leaner; we’ll get tighter; we’ll get better.” Reassurance about the banking community is what businesses are looking for as they make decisions about growth in an internationally shaky economy.

It was Scott’s and Moret’s analysis of how the national outlook will impact Louisiana that brought Carolyn Doerle, managing director/CEO of Doerle Food Services, to the luncheon with other representatives from the company, including founder Paul Doerle Sr. “We’re concerned about the shrinking credit market,” she says. “We have expansion plans and intend to build new distribution centers in Bossier and Port Fourchon.” The construction and expansion going on now in Lafayette was just one of the indicators Scott used to build a case for a sound economy here.

Moret’s pep talk on economic development in Louisiana had just about everyone in the room optimistic as he rattled off projects and statistics indicating the state has tremendous opportunities ahead. Moret is working hard to reposition Louisiana as the next great American state — his ambition to make it one of the leading economic states in the country. 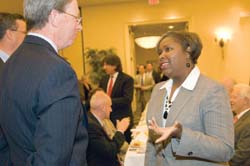 Scott Sutton of Home Bank, and Barbara McCarty of IberiaBank 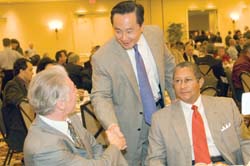 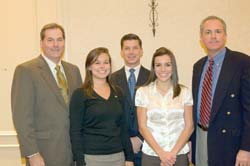 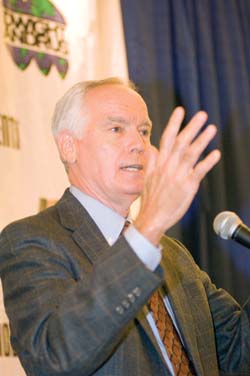 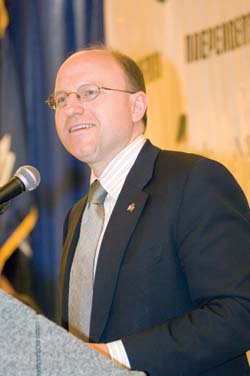 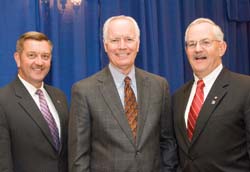