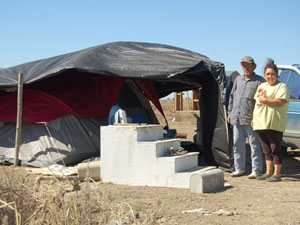 Post Hurricane Rita, people are living in tents in Cameron Parish. That’s according to Paul Rainwater, Louisiana Recovery Authority Executive Director, who has fired off a letter to FEMA Administrator R. David Paulison after attempting for weeks to get the federal agency to send temporary housing to residents of coastal parishes. Rainwater’s not talking about the travel trailers, contaminated with formaldehyde, that FEMA supplied after Hurricanes Katrina and Rita. He’s talking about more substantial mobile homes, that people can live in while they repair or rebuild their houses.

FEMA has refused to send temporary housing to coastal residents if their property falls into the flood zone “V” category, even though folks are committed to rebuild.

“We have made a series of urgent requests to FEMA, but they simply are not moving quickly enough to help our people. In south Louisiana, families must live in coastal parishes because of their important jobs with the oil and gas and seafood industries, which are critical to both our state and national economies. FEMA will not offer them temporary housing to do so because of its obstinate adherence to guidelines it could waive,” Rainwater says. “When people are living in tents to be close to their jobs, does it really matter if they live in an ‘A’ flood zone or a ‘V’ flood zone? What matters is that they need housing. FEMA is clinging to a rule that doesn’t make sense in a critical disaster situation. The policy written in Washington D.C. doesn’t match the need on the ground,” Rainwater says.

Meanwhile more creative minds are problem solving faster than FEMA can say “no.” Take artist Paul Villinski’s solar powered mobile emergency response studio. Villinski, a New York artist wanted to come to Louisiana post Katrina and create artwork in response, but couldn’t find studio space, so he figured out a way to do it on his own. He bought a 30 foot trailer, gutted it, and rebuilt it to be green, non-toxic and off the grid. The trailer generates its own power from solar panels and a wind turbine. There’s no formaldehyde onboard, and walls drop down to create an open air environment when the weather’s nice. Imagine the freedom of being totally self sufficient when all the power lines are down.

Villinski’s trailer, in conjunction with Jonathan Ferrara Gallery, is on exhibit in New Orleans starting November 1 for Prospect.1, the city wide art biennial that starts Saturday. You can find it at the Global Green Site in the Lower Ninth Ward at 409 Andry St. Click here for a map to the Prospect.1 sites. Check The Insider tomorrow for more info on Prospect.1.