Once virtually eradicated, whooping cough is making a comeback. 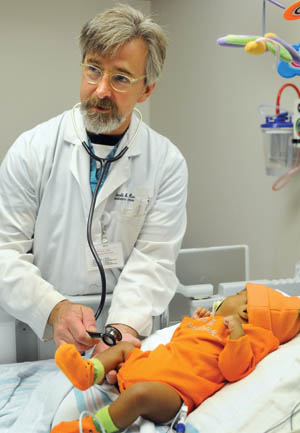 After years of dormancy, the dreaded whooping cough is back. This long-lasting respiratory infection, characterized by episodes of non-stop hacking, was almost unheard of in the U.S. for decades. Now, whooping cough — or pertussis — is making a comeback in Louisiana, including recent reported cases in Lafayette.

Before the pertussis vaccine was available, whooping cough killed 5,000 to 10,000 Americans each year. Since the U.S. vaccination program started in 1949, the annual number of cases dropped dramatically, reaching an all-time low in 1976. But, since the 1980s, the number of cases started to rise, spiking past 25,000 for all age groups in 2004. In the last six months, Women’s and Children’s Hospital and Lafayette General Medical Center have each treated two cases of whooping cough.

The condition can last six to 10 weeks in children, and 10 weeks or longer in adolescents. Complications include pneumonia, seizures, hypoxia, apnea and malnutrition. The death rate in infants two months or younger is 1 percent. That rate declines to less than one-half  percent in babies 2-11 months. “Pertussis deaths in adolescents are rare,” explains Dr. Gerald Ross, a pediatric intensive care specialist who has been practicing at Women’s and Children’s Hospital for 18 years. “The disease can be deadly in infants under 2 months, after which the death rates fall off.”

This highly contagious bacterial disease is caused by a Gram-negative bacteria called Bordetella pertussis. The disease has four stages, starting with incubation, which lasts about seven days, with a range of five to 21 days. “That means that the disease can manifest seven to 10 days after a person is exposed to the bacteria,” Ross says.

Next is the catarrhal stage, where symptoms start with mild upper respiratory tract symptoms similar to the common cold, such as a runny nose, teary eyes, sneezing, fatigue and poor appetite. This phase lingers for about 10 to 14 days, and fever is absent or minimal at this time.

But, how can you tell if someone has a common cold as opposed to pertussis? “Most colds will resolve in a week or two, but this won’t,” explains Joan Stokes, infection control practitioner at LGMC. “Because most colds are caused by a virus, and a virus, in essence, just has to run its course. Pertussis is caused by a bacteria. So, unless it’s treated with antibiotics, it’s going to continue and get worse.”

The third phase, called the paroxysmal stage, can linger for two to four weeks. This is where the characteristic “whooping” cough begins. During this time, the patient has uncontrollable fits of coughing. “The coughs become so violent that the patients at some point have to inhale to catch their breaths, causing the ‘whoop’ sound,” Ross explains. “That’s why the disease is called whooping cough.”

In the final, or convalescent, stage recovery occurs gradually. This period might take about three to four weeks, during which the patient could continue to have spasms of coughing.

Treatments for whooping cough include antimicrobial agents (antibiotics) and supportive care. Infants less than 6 months old are normally hospitalized so that health care personnel can monitor them to prevent seizures and pneumonia. While older children can take cough suppressants, these are not recommended for infants under 6 months of age because of the side effects, one of which is respiratory suppression (forgetting to breathe).

Why the sudden resurgence of this potentially life-threatening illness? Ross points to better detection and waning immunity. Four combination vaccines are used to prevent diphtheria, tetanus and pertussis: DTaP, Tdap, DT and Td. DTaP and DT are administered to children under 7 years old, while Tdap and Td are given to older children and adults. The Centers for Disease Control and Prevention’s  Advisory Committee on Immunization Practices recommends children get five doses of DTaP at the following ages: 2, 4, 6, and 15-18 months and 4 to 6 years. DT, which does not contain pertussis, is used in children who cannot tolerate the pertussis vaccine.

After three vaccines over six years, the pertussis immunization wanes, and patients need a booster shot. ACIP recommends a single dose of Tdap for adolescents age 11 to 12, or in place of one Td booster in older adolescents and adults age 19 through 64. “As you can see, it takes a while for you to have complete immunization,” Stokes says. “So, if a child is exposed, even if they’ve begun their series, if they haven’t completed it, they are still vulnerable.”

Another cause of the disease is close contact with a known pertussis patient, meaning face-to-face exposure within 3 feet of a symptomatic case for at least 15 minutes; direct contact with respiratory, oral and nasal secretions, or sharing the same confined space for more than one hour. This is particularly important in a classroom setting. “Even if you receive the booster, and you have an exposure that meets this criteria, doctors will probably, at this point, still give you antibiotics,” Stokes says. “That’s just because the [Tdap] booster hasn’t been out long enough [2005] for them to gather enough data to prove that it’s not necessary.”

The secondary attack rates are about 80 percent. “So, that’s pretty high for people who are in a house and have not received the booster or never received the vaccine,” Stokes cautions.

To prevent this disease, both Ross and Stokes recommend vaccination and avoiding infected persons. “Anyone 11 to 18 years of age should get a booster shot,” Ross says.

“Stay away from little babies when you are sick,” Stokes adds. “We all love to kiss on little babies, but as adults, we can carry things that can be very deadly to a small infant. And, it’s important for adults to keep their vaccines current. None of us want to go and get our boosters — that’s not a pleasant thing. But, we need to remember that if we get these illnesses, and we pass it on to a child, or even an elderly person who is not vaccinated or has weaning immunity, it can be very deadly to them.”