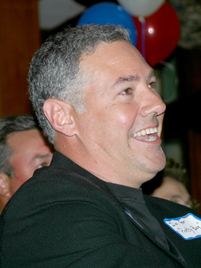 He’s been dishing it out for years and last night, outspoken conservative talk show host Moon Griffon got a taste of what it’s like being on the other side of the radio. Griffon, who’s celebrating 15 years with The Moon Griffon Show, was roasted at an event at the Petroleum Club that drew more than 250 people and benefitted Louisiana HonorAir. Among the roastees were some of Griffon’s most frequent targets for abuse, including “Pretty Boy Troy” (state Sen. Troy Hebert), “Slick Nick” (state Sen. Nick Gautreaux), “Me-me-me-me Michot” (state Sen. Mike Michot) and "the Queen Bee," former Gov. Kathleen Blanco. Here are some of the best lines from the night:

Carol Ross:
"You’re worried about a move toward socialism. The first thing socialist leaders do when they take over is do away with all the intelligentsia and the real journalists. You should be safe on both fronts."

State Sen. Mike Michot:
"Moon does such a great job at helping candidates ... not get elected. Most of the time if Moon is for you, you’re going to lose. This past year when he cranked up his criticism of me, I wound up without opposition."
**
ULM Professor John Sutherlin:**
"The only way to enjoy the Moon Griffon show is in high-def. You either have to be high or deaf."
"I Googled ‘Moon Griffon,’ and it came back, ‘Why?’"
**
State Sen. Nick Gautreaux:**
"Whenever I talk to young kids I tell them if at first you don’t succeed, become a talk radio host."
"Moon’s motto is if you can’t convince them, confuse them."

City-Parish President Joey Durel:
"How did he get the nickname ‘Moon’? It was recognized in high school how far in the dark he really was."
"This week Moon left the Republican Party. Mary Landrieu was quoted as saying, ‘That’s one confused talk show host.’"
**
State Sen. Troy Hebert:**
"Moon Griffon lied when he said I like the blondes. I also like the brunettes and the redheads. I even like the silver-haired ladies, especially the Republican ones that drive the long Mercedes and have the big diamond rings."
"I think we’re roasting one of the most eligible weiners in the state. Slick Nick wanted me to call you Oscar Mayer. I wouldn’t do that to Oscar Mayer."

Gov. Kathleen Blanco
"Moon used to be a caterer. Now he specializes in serving up b.s."
"Ever since I heard about Sarah Palin’s $150,000 wardrobe stipend, I’ve been hacked off at the Democrats."