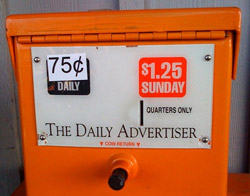 It was often hard to justify paying 50 cents for The Daily Advertiser. That decision just got a little easier, as the local daily has raised its price above that of other state papers, including The Advocate and The Times-Picayune. Single copies of The Advertiser are now 75 cents, a 50 percent price hike from the standard 50 cent fare. The increased cost appears to be part of a company-wide initiative with Gannett Inc., which recently announced that it will be raising the single issue price for its daily flagship, USA Today, to $1 a copy.