As Bobby Jindal works to capitalize on the buzz surrounding his presidential ambitions, speculation on the political future of Kathleen Blanco is just as buzzworthy. 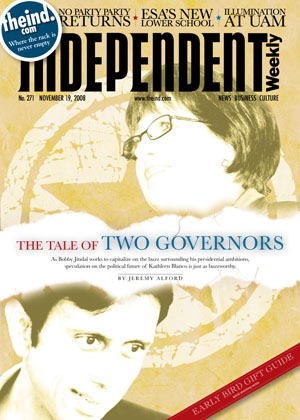 Unlike Mike Foster, who rarely surfaces since he left the governor’s office, former Gov. Kathleen Blanco is out there shaking the political bushes. She was practically front and center on Nov. 4, standing on stage alongside fellow Democrat Mary Landrieu as the state’s senior U.S. senator won a third term. The two women are longtime friends, so it’s understandable that Blanco would be there.

A few days later, Blanco issued a press release praising President-elect Barack Obama for his choice of U.S. Rep. Rahm Emanuel of Illinois as White House chief of staff. Blanco, even in her post-gubernatorial life, still has a spokeswoman, Aprill Springfield, who has issued three other press releases this year on behalf of Louisiana’s first woman governor. The earlier releases were quick hits that focused on state issues and speaking engagements. Now, all of a sudden, Blanco is interested in federal matters.

“Congressman Emanuel is a no-nonsense individual who took a personal interest in Louisiana’s problems,” Blanco says in the latest release. “He was an important player who helped Louisiana’s citizens and communities secure a wide range of assistance.”

For all you conspiracy theorists, there might be another reason Blanco is shilling for national Democrats. Speculation has it that Blanco’s husband, Raymond “Coach” Blanco, a wily political strategist in his own right, is putting out feelers about the 2010 re-election campaign of U.S. Sen. David Vitter. The junior senator, a Republican, may be vulnerable after being linked to a prostitution scandal. State and national Democrats are looking for a good candidate to challenge Vitter.

Congressman Charlie Melancon of Napoleonville months ago expressed interest in running, but lately he is said to be leaning against the idea. Melancon turned 61 last month and is seriously pondering his future. He still plans to make an announcement in January. “Right now there are no other plans aside from re-election. I’m really happy with the job I have,” says Melancon, adding that his influence in the House is growing, and recent power rankings show him leading the state delegation in the lower chamber.

Another name that has surfaced recently is that of Shaw Group CEO Jim Bernhard, who supported Blanco for governor and briefly served as state Democratic Party chair during her tenure. Sources close to Bernhard say he is eagerly testing the waters and has even met with some Beltway Democratic bigwigs about challenging Vitter.

So where does that leave Blanco?

Neither the former governor nor any member of her team offered a comment for this story, but sources close to her suggest Coach may have been acting independently. That would fit his persona. Additionally, Kathleen Blanco has told reporters repeatedly in the past that she has no interest in living in Washington, D.C. Still, a comeback for the woman often blamed for the federal flubbing of Katrina’s aftermath could have an appeal all its own.

The former governor seems much more energized after stepping away from the limelight for a while, no longer willing to let people take cheap shots at her without responding. She even phoned into conservative radio talk show host Moon Griffon’s program a few weeks ago after one of his callers started ranting about her handling of Hurricane Katrina, mainly the highly publicized battle with President Bush over control of the National Guard. After Blanco made her case, the belligerent Griffon — who’s long been one of her harshest critics — sounded like he’d been swayed, thanking her for her call and saying he understood the situation better after hearing her side.

Blanco’s Republican successor, Gov. Bobby Jindal has a more discernable game plan, although he’s playing it coy. When it comes to a possible run for the GOP nomination for president, Jindal says it’s his “intent” to run for re-election as governor in 2011. No one is listening to him, though. According to a search on Google News, the terms “Bobby Jindal” and “president” appeared in more than 1,200 news items from Nov. 1 to Nov. 11 — averaging some 109 news stories nationwide per day. We’re talking about mentions in monstrous publications such as the Wall Street Journal and The New York Times, as well as small dailies like the Pioneer Press in Saint Paul, Minn., and Daily News-Record in Harrisonburg, Va.

There were also just as many blog posts during the same period, based on a similar Google search. All the attention is a political coup for Jindal, and it shows no signs of waning. Jindal will be in Iowa this month, an important early caucus state, to deliver a speech to the Family Policy Center, a prominent Christian conservative group. In addition, he recently made a strategic — and very interesting — hire.

Kyle Plotkin, a New Jersey native, is Jindal’s new press secretary. He replaces Melissa Sellers, who has been promoted to communications director. Plotkin was plucked from the failed U.S. Senate campaign of GOP state Treasurer John Kennedy, where he served as deputy communications director. But it’s Plotkin’s earlier experience that adds value to his hire. Plotkin knows the national circuit and worked on the recent presidential campaign of former Massachusetts Gov. Mitt Romney as a senior analyst.

Plotkin has also built up some solid relationships in Louisiana, even among Democrats. “Over the course of the past year I have come to know Kyle and know him to be a smart and extremely capable press secretary with a very good sense of humor. Regardless of his presidential ambitions, the governor is fortunate to have a press secretary of Kyle’s caliber on his team,” says Brian Walsh, spokesman for the Louisiana Democratic Party’s coordinated campaign, Louisiana Victory. “And I’m personally glad that Kyle has chosen to remain here in Louisiana during this exciting time in our state’s history.”

As for how Jindal grabbed the American political limelight, recent revelations speak volumes. The Washington Post’s Politics Blog reported last week that Jindal was not even vetted as a potential vice presidential pick. Reporter Chris Cillizza bases the report on information passed to him by “sources close to the Pelican State chief executive.” The non-vetting was not a snub of Jindal by GOP nominee John McCain, however. Rather, it appears to have been more of a slight by Jindal of McCain. The blog post alleges that Jindal declined to be vetted because his handlers feared he would “be caught up in what they believed to be a less-than-stellar campaign that could pin a loss on Jindal without much ability to change or control the direction of the contest.”

Such a strategy would allow Jindal to shoot for the 2012 presidential nomination with no 2008 baggage, although he continues to say that re-election is his “intent.” Truth is, he could run for re-election and still enter the 2012 primaries at the last minute, but strategists wonder if such a move would benefit Jindal’s national profile. A bid for the U.S. Senate in 2010, however, could aid Jindal in that area — but he would have to run against incumbent junior Sen. Vitter, a fellow Republican for whom the governor is raising money these days.

Of course, if Barack Obama sustains his approval ratings, any Republican candidate in 2012 would be a sacrificial lamb — or the presumptive frontrunner in 2016. That may be the year that Jindal is aiming for, possibly taking a brief detour to challenge Landrieu (if she runs again) in 2014. For now, Jindal holds all of his political cards. If the latest reports about his handling of the V-P process are true, his game plan for the coming years will likely be a closely guarded secret. So let the speculation begin, or rather continue.