Glenn Armentor’s ‘No Party Party’ fund-raiser for Republican Joey Durel has him fending off calls for his resignation from the Lafayette Parish Democratic Executive Committee. 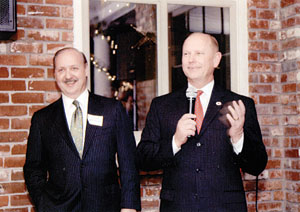 Glenn Armentor hasn’t been in this much trouble for throwing a party since he was in high school and decided to take advantage of his parents being out of town for the weekend. Now, his “No Party Party” — a bipartisan fund-raiser for Republican City-Parish President Joey Durel planned for Dec. 4 at Armentor’s home — also appears to be taking on a life of its own.

A lifelong Democrat and elected member of the Lafayette Parish Democratic Executive Committee, it’s not altogether surprising that Armentor is hosting a fund-raiser for Durel. Armentor organized the first “No Party Party” fund-raiser for the city-parish president in 2006, a year before Durel was up for re-election. It was one of the biggest political bashes Lafayette has seen. At $250 a couple, the event drew 600 people and netted approximately $100,000 for Durel’s campaign. Transit buses and four sheriff’s officers were brought in to manage the overflow parking along West Bayou Parkway. More than 100 people signed on as co-hosts for the event, including Republicans like then U.S. Rep. Bobby Jindal and U.S. Sen. David Vitter; co-hosts from the other side of the aisle included former U.S. Attorney and one-time state Democratic Party Chairman Mike Skinner and retired 3rd Circuit Court of Appeal Chief Judge Ned Doucet. This year’s party lists more than 90 co-hosts, each paying $500. Democrats include District Attorney Mike Harson and attorney Gary McGoffin and his wife, Thelma.

Armentor recently sent out a whopping 2,400 invitation letters for his “No Party Party.” Printed with his law office letterhead, Armentor heaps lavish praise on Durel, whom he writes “has grown into a one-of-a-kind office holder who brings sound people instincts, unquestioned ethics, integrity, and a thorough knowledge of business administration to the office of City-Parish President.”

Now just a year into his second term, Durel says he fully expects to seek re-election in 2011 (he is bound by the same three-term limit as council members). “As long as I feel we can make a contribution to this community, I’ll stay in it,” Durel says. In addition to the announcement of the “No Party Party” fund-raiser, Durel also recently launched a new Web site, joeydurel.com, which accepts contributions to his campaign fund.

Having Armentor promote that effort is too much for some Democrats. He caught flack from fellow executive committee members for the first “No Party Party” but was never formally censured. This year the committee seems more intent on taking action. In an e-mail to Armentor last week, copied to the entire committee, at-large member Mike Stagg writes that the work of committee members involves “a full commitment to the party and its principles. It is not for fair weather Democrats.

“By building Durel’s war chest,” Stagg continues, “you are working to discourage Democrats from running against him in the 2011 election. This is a repudiation of your responsibilities as a member of this committee. Any unpleasantness or rancor can be avoided by you tendering your resignation from this committee. Then, as private citizen and Democrat Glenn Armentor, you can do what you want. Step down now, have your party, and we can all proceed with the work at hand.”

Armentor says he has no intention of stepping down.

Along with Stagg, at least two other members of the 12-member executive committee — Stephen Handwerk and Alfred Boustany — have come out in opposition to the “No Party Party,” and as of press time, committee members were still finalizing plans for a special meeting this week to take up censuring Armentor. The committee’s chairman, John Bernhadt, says he has done nothing to call for any official action against the local attorney, but adds, “We don’t see the benefit in hosting a fund-raiser for Joey, and we will not be joining him in that.”

Last year, Durel faced no opposition in his re-election bid, and thus far, no one has announced any intention of challenging him in 2011. Handwerk insists Armentor can still be censured. He says censure could range from a simple declaration of wrongdoing to include completely stripping Armentor of his voting rights on the committee. Any censure would require a hearing from the state party’s executive committee and a majority vote from the 210-member central committee. Handwerk notes that the committee also is considering taking up Armentor’s poor attendance record as a means of possibly kicking him off the committee — a motion Handwerk says would not require state party approval.

“It seems that Glenn has drawn a line in the sand,” Handwerk says.

“I’ve already received many phone calls, many e-mails about [the Durel party]” he continues. “People are telling me that this is completely unacceptable, that they expect more from their Democratic leadership. A lot of people are quite upset and understandably so.”

Handwerk maintains the issue is all the more difficult for him because he was one of the people who came to Armentor’s defense two years ago following the first “No Party Party.” Armentor told committee members then that the event, originally planned as a private affair, had gotten out of his control, and — according to Handwerk — gave assurances that the fund-raiser would not happen again. “I’ve looked up to Glenn for quite some time and this really, really calls into question a lot of that,” says Handwerk.

Armentor says he made no guarantees that the event wouldn’t happen again. He also says that last year he broached the idea of making the event a joint fund-raiser, where Republicans could give half the money to Durel, and Democrats could donate half to charity. “The Democratic executive committee really wasn’t interested in doing that,” Armentor says. “If Joey got half the money, that’s too much.”

Armentor says part of the justification for holding the event again this year was the recent election of Barack Obama and his call for people of both political parties to come together — something Armentor believes the first “No Party Party” did. “It’s a real nice party, and it’s right before Christmas,” Armentor says. “It’s a warm and fuzzy-type thing. Everybody’s getting along; people that hated each other for years are hugging each other.”

Armentor adds that in future years, he is considering holding the event for charity and not for the benefit of any one political candidate. This year, however, he does not have a problem with the proceeds going to Durel, an official he has lauded for being hard-working and bipartisan. Armentor points to the innovative fiber-to-the-home project, which was endorsed by the local Democratic Party, and Durel’s commitment to a more open, transparent local government.

Handwerk says Armentor’s actions could give people the impression that the Democratic Party supports Durel, and “nothing couldn’t be further from the truth.” Handwerk says Durel’s budget priorities, which have included proposed cuts to the Night Owl bus service, show he is out of line with many Democrats. In addition, Handwerk notes that Durel can donate money from his campaign account to other Republican officials.