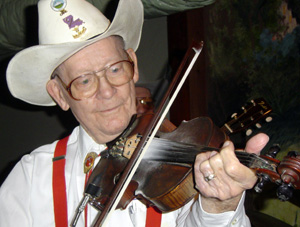 Luderin Darbone, the Cajun swing fiddler and co-founder of the Hackberry Ramblers, died on Friday in Sulphur. Visitation will be held today from 5-9 p.m. at Hixson Sulphur Memorial Funeral Home in Sulphur. The funeral will be held tomorrow at 10 a.m. at Our Lady of Prompt Succor Catholic Church in Sulphur.

Born in Evangeline and raised in Texas, Darbone co-founded the Hackberry Ramblers with Edwin Duhon in 1933. The band combined Cajun music with the popular western swing and country music of their day, and in 1935 the Ramblers recorded for RCA Bluebird. Sixty-four years after the band's inception, the Ramblers were nominated for a Grammy Award for their album Deep Water for the best traditional folk album of 1997. That same year, Darbone and Duhon received a National Heritage Fellowship from the Folk Arts Program of the National Endowment for the Arts.