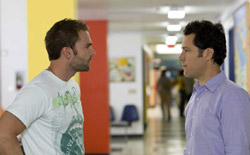 Silly will always survive. The cinematic players may change — Mike Myers gives way to Will Ferrell, the Farrelly Brothers bow to the Judd Apatow alliance — but truthfully and thankfully, the juvenilely joyful among us don't ever have to resign ourselves to rom-com drivel or unfunny fat-suit shenanigans for very long. And that's because funny is one of the forces that hold the world together. In a silly-string theory of everything, the universe runs on exactly the kind of improper, impulsive, impeccable fun that fuels Role Models.

Constant coworkers and sometimes friends, Danny (Paul Rudd) and Wheeler (Seann William Scott) could not be less alike. Danny is a caustic droop, dissatisfaction with his own life alternating with heated hostility toward everyone else's. He only stops obsessing about his dead-end job as an energy-drink spokesperson long enough to yell at a barista about these newfangled names for various sizes of coffee drinks. He's a grumpy young man.

Wheeler, on the other hand, has never stopped to question his frat-party existence. He loves dressing up as a minotaur, the energy drink mascot, and bouncing around on school auditorium stages, telling kids to guzzle his product instead of doing drugs. He's happy-go-very-lucky, a partying ladies' man who loves his irresponsible life.

Everything swims along uneventfully until Danny's lawyer girlfriend Beth (Elizabeth Banks) decides she and Danny are in a rut. Danny agrees and wrongheadedly proposes on the fly; she promptly dumps him. Danny snaps, resulting in a less-than-inspirational, profanity-laced presentation to a group of junior high kids, a run-in with a tow-truck driver and Hollywood's favorite Hobson's choice: jail or community service. Nobody's choosing to do time, so make the world a better place, it is.

Danny and not-so-innocent bystander Wheeler find themselves signed up with Sturdy Wings, a mentoring program — run by completely mental ex-addict Gayle (the divinely absurd Jane Lynch) — that pairs up troubled kids with volunteer adults. Danny gets Augie (Superbad's Christopher Mintz-Plasse), a cape-wearing role player; Wheeler gets Ronnie (Bobb'e J. Thompson), the foul-mouthed son of a single mom. They have to last at least 150 hours with these kids to satisfy a judge and stay out of the slammer.

Nothing about this premise says "funny." In fact, it all kind of screams than anyone with a brain and a decently operating funny bone ought to run in the other direction without so much as a quick look back. As a rule, big-guy, little-guy buddy movies suck. Heartstrings are pulled, usually heavyhandedly. Laughs are almost always safe. Not Role Models. The writing team of David Wain, Paul Rudd, Ken Marino, Timothy Dowling and W. Blake Herron manage to make the community service exactly no more than it really should be — little more than an excuse for a barrage of surprising punch lines, spread around to the entire cast with laughing largesse.

This isn't a feel-good movie that's safe to see with a kid; it's just a very funny film that happens to feature a few young actors. The kids' characters aren't sweet and troubled; they start out a little weird (Mintz-Plasse) and a lot sassy (Thompson). For most of the movie, Danny is only willing to go so far to mentor a kid who treats every day like his own personal Ren fair and is unafraid to say so. And it's only by talking frankly and funnily about sex and rock 'n' roll that Wheeler is able to turn Ronnie from the kid who stole his car keys to his own little wingman. Their lines are all smart, sometimes shockingly blue and almost always funny.

Of course, this is a movie so somebody does eventually screw up and somebody does eventually have to make a choice. And with a true Apatovian approach — practically the norm for comedy these days — there is a layer of sweetness underneath even Rudd's misanthropic malaise. But just a touch. The plot still pivots on an awkwardly self-aware conversation half-carried out in old English followed by the best KISS tribute that ever was, and that is what makes these Role Models worth following.