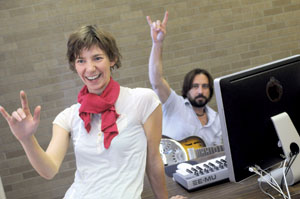 Inside the new Tipitina’s Music Office Co-Op in downtown Lafayette, tattered bright blue carpet covers the floor, (due to be replaced in a couple of weeks) and slightly discolored drapes hang on the windows. Refurbished computers sit atop second-hand desks and foldout tables. A cassette tape/CD jambox, tuned to KRVS, sits on the floor.

It’s a far cry from any kind of glamorous L.A. recording suite, but then again, it wasn’t designed for producing Guns N’ Roses epic $13 million, 17 years-in-the-making, titanic flop, Chinese Democracy. While it does provide desktop computer recording tools, the music co-op isn’t meant to be in competition with any professional studios. It’s more of a communal office space for artists, and right now, it’s still a work in progress.

The Lafayette co-op, on Johnston Street behind The Leather Pouch and adjacent to the AT&T store, officially opened its doors on Monday. Rachel Nederveld, its local manager, says she is still working to get gear and plans to promote itself more in the near future. She is actively seeking donations and hopes to soon add a piano, a drum machine and microphones for the music room, along with a conference table for a meeting room up front.

“It’s the kind of thing when you’re a nonprofit, you go with what you got,” Nederveld says. The 25-year-old has been busily setting up the office over the past month, purchasing much of the furniture from the Habitat for Humanity re-store. A Lafayette native, Nederveld recently moved back to town after spending time in New York and two years working at indie rock label K records in Olympia, Wash. She says Lafayette has often struggled to retain and draw young, 20-something creative artists, and she wants to be a part of reversing that trend. “[The co-op] is a place for artists to come together, help each other, inspire each other and teach each other,” she says. “It’s a creative community.”

Today, members can come by to simply use the phone or send a fax. Five desktop computers are set up in one room for anything from editing photos and printing labels to just browsing the Internet, checking e-mail and updating MySpace pages. The computers are equipped with Microsoft Office, Adobe Suite, Garageband and Reason. Two other rooms offer desktop computers that will soon be set up with more advanced software programs, namely, Digidesign’s Pro Tools desktop recording program and Apple’s Final Cut video editing software. The programs are both industry standards and can be quite expensive for individual artists to purchase on their own. Pro Tools basic software typically retails for about $300, while Apple’s Final Cut generally costs more than $1,000. Co-op members pay a $10 a month fee for access to the office. (Video editing and recording time can be reserved in two-hour blocks). The co-op also plans to put on workshops teaching Pro Tools, Final Cut and other tools to its members.

The Tipitina’s Foundation launched the first music office co-op in 2003 in New Orleans. The project is the brainchild of Scott Aiges, the former director of music business development for the city of New Orleans who is now director of programs, marketing and communications with the New Orleans Jazz & Heritage Foundation. Aigis recognized how common it was to hear kids screaming or dogs barking in the background when he was on the phone with musicians and thought they could benefit from having access to a more professional work environment. He found a willing partner with Roland Von Kurnatowski, owner of Tipitina’s night club and co-founder of the Tipitina’s Foundation.

Todd Souvignier, the foundation’s technical director who manages the co-op program statewide, says the idea was simple. “Maybe if we made an office where a musician could make a phone call, pick up a fax, check an e-mail, they might be able to work more professionally and hence make more money.”

By most accounts, the program has been an overwhelming success. Already, music office co-ops are open in New Orleans, Baton Rouge, Alexandria and Shreveport, collectively serving some 1,200 members statewide. (Future plans call for opening co-ops in Lake Charles, Monroe and Opelousas). The program’s annual economic impact survey shows that members use the co-ops an estimated 12,000 times per year.  It also shows that active members who have music or media revenue have experienced income increases ranging from 10 to 29 percent. Of these members, 91 percent attribute their revenue spike directly to the co-op.

“It’s a program that started with very modest goals,” Souvignier says, “and that doesn’t cost very much to operate but has really turned into a significant economic engine for local musicians and is really sort of a first stopping point for any Louisiana musician who wants to upgrade his or her career.” This year alone, the Shreveport co-op has reported being responsible for helping record and release 20 record albums.

The music co-op program has been partially funded through annual state grants, which totaled approximately $300,000 for 2006 and 2007. The co-op also receives funding and management expertise from the Tip’s Foundation. Locally, Souvignier says Cynthia Simien, Jennifer LeBlanc and the Blue Moon Saloon have all been instrumental in helping the office open in Lafayette. He says Lafayette has been on the co-op program’s radar since day one, but that Hurricane Katrina and other issues delayed the office’s opening. “We’re very excited about being in Lafayette,” he says. “Lafayette supports its local music and artists in real substantial ways and not every town does that. We consider it an honor to play some small role in this.”

A former sound engineer, Souvignier says he is very sensitive to concerns that the co-op offices may be siphoning business away from professional recording studios. “We’re an economic development program,” he says, “and it would be anathema for us to compete with existing or potential for-profit businesses. What we want to make sure we’re doing is boosting the local recording industry not sapping it.”

Souvignier points to Shreveport where the music office co-op there opened up right across the street from an established Pro Tools recording studio, Odyssey Sound. While Odyssey had some trepidation about the co-op at first, the two offices have grown to be close partners. Odyssey’s sound engineers are now helping teach workshops at the co-op. In turn, Odyssey has been drawing in business from co-op members who are ready to take their recording projects to the next level. Souvignier says, “It’s turned into a real business builder for the local recording industry up there, and we expect the same type of results in Lafayette of course.”

Souvignier says co-ops also help break down the barriers among musicians themselves. “One of the things we see in a music scene, and not just in Louisiana, is a competitiveness,” he says. “You’ve got all of these bands and musicians, and they all think they’re hustling for the same gigs and the same record deals. As soon as you get these people into the same room together they pretty quickly realize that their all working toward common objectives.

“The co-op,” he continues, “has become kind of a real first stop for people seeking collaborators or help with finishing recordings or help with artwork. It’s become a really nice kind of neutral ground where people can bring their various skills and work together. It’s all about cooperation.”