Jarred “The Lethal Weapon” Leblanc is ready to rumble with local boxers and musicians at Blackham Coliseum for two good causes. 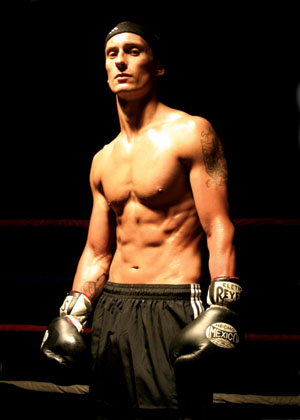 How do you knock someone out? “Hit them with an overhand right to the jaw. There’s a nerve that runs through the jawbone. When you hit it hard enough, it shocks the circuit board of the brain, and the lights go out,” says Jarred “The Lethal Weapon” Leblanc. He should know. At 5’ 11” and 152 pounds, the Super Welterweight is well versed in the ways of the fist. The Lafayette pro boxer, ex-street fighter and reformed hell-raiser is the main attraction at the Rock the Bells Music and Boxing match on Dec. 5 at Blackham Coliseum.

Raised in north Lafayette, the product of a broken home, Leblanc showed amazing promise as a young athlete with a fierce competitive streak. But in his late-teens that streak took an aggressive turn toward the destructive. After being expelled from Carencro High School, Leblanc fell in with a “bad crowd” of folks who trafficked in the party train underworld of bars, drugs and drink.

Directionless and looking for a place in the world, Leblanc forged an identity through the language of violence as a feared street brawler. “I became popular as a backyard fighter,” he says. “I had a natural talent for it. I fought in every bar in this town — Cowboys to McKinley Strip — knocking out drunks and defending friends. The fighting became like an addiction.”

After tensions and arguments at home increased, Leblanc’s parents decided he needed a change of venue and moved him to Rhode Island where he fell into a new groove and began studying Kenpo martial arts. “I loved it,” Leblanc says. “Here was a thing that I could focus on and put my energy into.”

A year later, Leblanc returned to Louisiana and fell back in with the same bad crowd and picked up where he left off. A close friend advised him to direct his anger to positive pursuits and suggested boxing. But Leblanc wasn’t ready yet.

The bars, the drinking, and most of all, the street and bar fights continued. It didn’t take long before trouble caught up with him in the form of numerous stints in jail on assorted battery and drug charges. “One night while locked up in LPCC, I asked myself, ‘What am I doing? Where is my life going? I’m going to end up nowhere, hurting somebody, or being in prison for the rest of my life,’” remembers Leblanc. “I was pissing away my dreams. I finally woke up and said, ‘It’s time to do it.’”

In 2004, Leblanc began training with former boxers Kenny Vice and Chad Broussard at Ragin’ Cajun Boxing. Within the next three years, he transformed himself into a disciplined and determined athlete, becoming a formidable amateur with a record of 25 and 4 — many of the wins knockouts, and two them Golden Gloves titles. More importantly, he began the process of turning his life around, rediscovering God and the church, starting his own business, adhering to a strict diet and training regimen, marrying his girlfriend of many years, and becoming the father of two children. “Boxing saved my life. It taught me to control my emotions in and out of the ring. Now, family is more important than titles and accolades.”

“Jarred has a tremendous amount of discipline and drive. He’s an extremely determined and coach-able athlete,” says Daniel Stanford, Leblanc’s strength and training coach for the past two years. “It takes a huge amount of restraint to control one’s emotions, sometimes going against the survival instinct, but it’s a necessity in succeeding at this sport.”

“The thing I like most about Jarred is that he’s got a great work ethic and a willingness to learn,” says Chad Broussard, ex-championship fighter, boxing coach and manager. “Boxers have the hardest heads — stubborn with bad attitudes.”

There’s an undeniable buzz circulating around Leblanc and the team of family, friends and associates that has assembled around him, “When Jarred walks in the ring, people go nuts,” says Chris Greneaux, a childhood friend. “They know he is one of them.”

No longer satisfied with fighting for trophies, Leblanc turned pro in 2007 and began pushing his boxing career to the next level. He won his first three pro bouts by knockout and aims to keep that streak going; moreover, he’s got big plans for his life outside the ring. “I got kicked out of school for fighting, back in the day. Now I want to get back in school and complete my education,” says Leblanc. “It’s ironic that the same thing that hurt me in the beginning — fighting — might be the thing that helps me in the end.”

The pound and thud of flesh brings to mind many things. Since the muddy primordial dawn of the Cro-Magnon — man, beast, and creature have participated in the age-old ritual of sorting out male dominance in the social order. Somewhere along the line, it became sport. And people paid to see it.

On. Friday, Dec. 5, at Blackham Coliseum, it all plays out again at the Rock the Bells event with musical accompaniment, where some of south Louisiana’s finest talent in music and boxing fight for two worthy causes: the Jacob Crouch and the Mark W. Graham Foundations. In addition to Leblanc, there will be a host of other up-and-coming Acadiana boxers mixing it up in the ring, including Mason Menard, Johnny White, Floyd Baker and others. Music will be provided by Steve Riley and the Mamou Playboys and Horace Trahan. It’s a night that will surely kick the holiday season off with a bang.

“It’s a gladiator sport and a battle of wills,” says Leblanc. “You’re alone in the ring with nothing but what you bring to the table.”

Rock the Bells kicks off at 7 p.m. on Friday, Dec. 5, with a live performance by Grammy Award nominees Steve Riley and the Mamou Playboys. At 8 p.m., the boxing begins with professional and amateur boxers featuring local talents like Jarred Leblanc, Mason Menard, Johnny White, Floyd Baker and others. Horace Trahan closes out the night with a musical performance at 10 p.m. General admission is $20. VIP tables can be purchased at $1,000 per table, with 10 seats per table. Portions of the proceeds will benefit the Jacob Crouch Foundation and the Mark W. Graham Foundation. For more information, visit www.dtpromotions.com.