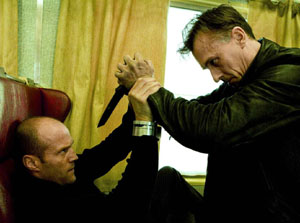 Transporter 3 is the best summer movie released in November of this year. There's something terribly pleasant about taking a break from all of the happy holiday hullabaloo for something we're more used to seeing on days with warmer temperatures: crazy car chases, big-bang explosions and a little light-hearted and heavy-handed fun at the movies. Not your usual awards-season fare, the third installment in the hit-and-run series once again puts popcorn passengers on the fast track to an hour and a half of passable action-adventure distraction.

Fishing with his old friend Tarconi (Francois Berleand) off the coast of Marseille, Frank Martin's last road trip seems far behind him. He's kicked back, waiting for a bite, willing to stubbornly argue with the French police inspector that Dean Martin's effortless charm made him more of a genius than Jerry Lewis' silly pratfalls. But later that night, everyone's favorite chauffeur with a cause finds himself again behind the wheel — and on the wrong end of a complicated deal gone wrong.

A job Martin (Jason Statham) had turned down and passed on to a friend Malcolm (is there a transporter trade association?) returns to haunt him. More literally, it returns to plow into his minimalist living room, his friend's black Audi barreling through his wall. Malcolm (David Atrakchi) has been shot, but that turns out to be the least of his worries; when the paramedics load him into the ambulance and pull away, the driver friend detonates. He — and his passenger, the pouty girl in the back seat — have been outfitted with bracelets that turn into bombs once they are 75 feet removed from the car in question. A rifle butt to the back of the head, and soon Martin finds himself wearing the same accessory.

The transporter's new client-by-coercion goes only by the name of Johnson (Robert Knepper), a nasty man with a nasty disposition, given to shooting henchman who talk too much. He talks about Martin delivering a "package" to a GPS-directed destination, putting a bag of something in the trunk of the Audi he's altered; in that moment, everyone but Martin realizes the delivery is actually the girl, Valentina (Natalya Rudakova), who turns out to be the kidnapped daughter of a Ukrainian government minister (Jeroen Krabbe). Without much say in the matter, Martin kicks the car — and the action — into high gear.

This being a Transporter movie, it really matters little that the plot hinges on a bullying American corporation attempting to force its environmentally toxic waste on the Ukraine. That part is simply understood to be the window dressing that surrounds the stage-center stunts, which in this film grow to include a boffo bicycle race, a little underwater improvisation and a new idea for how to catch a train. Statham's signature hand-to-hand (or more often foot-to-throat) combat sequences are inventively choreographed by series creator Corey Yuen, who along with writers Luc Besson and Robert Mark Kamen made Statham a star with the inital Transporter movie. The first fight boasts a few Fred Astaire grace notes, bringing back Martin's fastidious concern for the care of his trademark black suit even in the midst of a furious attack. The second uses the suit even more, Martin performing a sort of bare-knuckle burlesque, methodically turning his blazer, shirt, tie and belt into weapons. The staging appears as though it was superb, but the film's biggest flaw is that director Olivier Megaton and his editing team chop up the action into strobed quick cuts that oftentimes partially obscure the precision of Yuen's (and Statham's) artistic physicality.

Statham has always been the secret weapon of the Transporter films, and Frank Martin is a spare but striking character. He's a new incarnation of the reluctant hero, a guy whose push comes to shove more often than he'd like. He constructs rules to live by — no names, no changes of plans, no opening of packages — that really are just little recognitions that there never are any rules to live by. He breaks them almost as often as he invokes them. It's part of his weary charm.

In Valentina, first-time actress Rudakova gives Martin a love interest, presumably a move to show audiences the softer side of Statham. Unfortunately, it never really rises past the level of just another distraction. This isn't Statham's fault. Director Roger Donaldson's tight thriller The Bank Job (2008) proved that the Brit actor is definitely capable of more than just action when given the opportunity. He doesn't really seem hellbent of having more, though. In Transporter 3, Frank Martin explains that he's good to his car, so that his car will be good to him. In staying close to the genre that gave him stardom, maybe Jason Statham is just trying to take care of a vehicle that's been so awfully good to him.