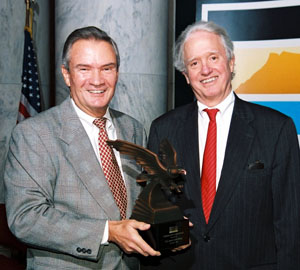 At a reception last night on Capitol Hill, former U.S. Sen. John Breaux was honored with America's Wetland's Lifetime Achievement Award. The Foundation's Chairman R. King Milling said of Breaux:
We would not be standing here today, if it were not for Senator John Breaux. He was the first person in Louisiana's congressional delegation to not only recognize that coastal erosion was a grave problem, but to actually do something about it.
Milling cited the Breaux Act as the longtime senator's crowning achievement. The U.S. Congress passed the Coastal Wetlands Planning, Protection and Restoration Act in 1990 to fund wetland enhancements projects, which funds more than 145 projects at $60 million annually to help restore and protect more than 100,000 acres of coastal wetlands.