As financial issues nip at their heels and pre-existing debt blocks out the light of day, lawmakers will embark on a predatory prowl for cash in 2009. 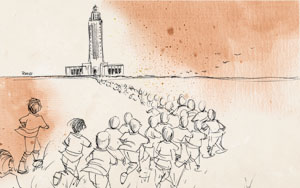 Just a few months ago, more than 1 million wildebeests were seen leaving the Serengeti Plain in Tanzania and heading north to Kenya. The hulky, horned creatures had greedily consumed all of the grass and water in the plain and were now in search of more. The great migration happens every year, and the wildebeests will eventually make their way back to Tanzania, but not before depleting their Kenyan resources first. Between the two points, the herd must pass through the temperamental Mara River, where at least 1,000 wildebeests die during each crossing. Some are attacked by hyenas while coming out of the water. Many drown. Others are eaten by crocodiles.

In a few months’ time, Louisiana lawmakers will make their own pilgrimage to Baton Rouge — possibly for a special session in January, but definitely for the annual session in April. It’s as predictable as the wildebeest migration. Lawmakers, however, will arrive at their destination to find grazing opportunities as barren as the Serengeti Plain the wildebeests left behind. And just like the beasts, it’s all because of their own gluttonous ways.

Fiscally, lawmakers will be forced to forage for whatever scraps the administration throws their way — and they won’t eat for free. Those who feed at the administration trough will have to toe the line, more like trained circus acts than wild animals.

Louisiana has an $865 million surplus, which will be doled out sometime next year by the administration of Republican Gov. Bobby Jindal. However, that rosy fiscal picture will give way to an anticipated $1.3 billion shortfall for the fiscal year that begins July 1, 2009. In most households, the answer would be obvious: Use this year’s surplus to mitigate next year’s shortfall. Unfortunately, the surplus “cannot be used to mitigate the shortfall for Fiscal Year 2010,” says Commissioner of Administration Angéle Davis, the governor’s chief budget officer. Under our state constitution, the surplus can be used for one-time expenses such retiring debt, bolstering the coast and paying for construction projects. A surplus can even be placed in a savings account for future use, but it will still be confined to the same select areas of spending.

Rep. Joe Harrison, a Republican from Napoleonville, says a constitutional convention could be called to remove restrictions on surplus dollars and to alter the method in which budget cuts are applied. Jindal and his team are open to the idea, but it can’t happen soon enough to plug the coming $1.3 billion shortfall. Had lawmakers taken advantage of past opportunities to save money, the challenge might be less onerous. They gorged themselves on a $1 billion surplus earlier this year and increased spending in the current budget by another $1 billion this summer. Now the pastures aren’t so green, and state officials have no place to migrate.

Perhaps appropriately, Davis says the first items to be stripped from the coming budget will be lawmakers’ pet projects. Of course, that could just be the administration’s opening line in negotiations over the current $865 million surplus. Some lawmakers say the horse-trading has already started, with those on the receiving end expected to swallow Jindal’s budget cuts next year.

The predatory jockeying for the surplus dollars has taken solid form in a short period of time. The Capital Region Legislative Delegation, for instance, recently met with Davis and Jindal Chief of Staff Timmy Teepell to secure $60 million for Baton Rouge-area transportation projects. Senate Retirement Chairman Butch Gautreaux, a Democrat from Morgan City, is trying to line up $100 million to pay down debt in the state’s retirement systems. The overall tally, known as unfunded accrued liability, has eclipsed $10 billion; the requested $100 million is a drop in the proverbial bucket.

Many legislative budget requests have merit. But as the positioning intensifies, important issues are sure to fall by the wayside. Robyn Ekings, spokeswoman for Louisiana State Employees’ Retirement System, says there are concerns that unfunded accrued liability will fall prey to politics — again — as lawmakers grab money that impacts their respective constituents more than the state as a whole. “Paying down debt just isn’t a sexy issue,” Ekings says.

This $865 million surplus could be the last fiscal hoorah for a while, so Jindal and lawmakers should spend it wisely. Legislative Fiscal Officer H. Gordon Monk says all of the state’s financial indicators are pointing toward hard times. Sales taxes are flat, corporate income taxes are in decline and oil prices — Louisiana’s great equalizer — are as unpredictable as ever. In recent weeks, oil has fallen below $50 a barrel, its lowest price since May 2005. That’s dangerously close to the outer reaches of Louisiana’s comfort level. “We can’t find many pluses,” says Monk.

Jim Richardson, an LSU economist who also serves on the state’s Revenue Estimating Conference, says the situation should not be underestimated. What’s even more alarming is there’s no prior frame of reference. “There are more industries with negative growth numbers than positive growth numbers,” he says. “We have not been through a period like this.”

There’s a sense that many lawmakers, especially those who do not sit on the money committees, don’t grasp the complexity of the challenges. “I know it’s difficult for you to understand the severity because we’re coming off of two consecutive years of surplus,” Davis told lawmakers earlier this month. “Right now we’re facing a moment of truth.”

Truth is always hard to swallow. Lawmakers like to cut services about as much as wildebeests like to cross the dangerous Mara River. The gnus steel themselves for the task — to the point of sacrificing some of their own for the overall good of the herd — because they know they’ll find better times on the other side. Lawmakers, on the other hand, are not as willing to sacrifice. They fear another kind of population check: Louisiana voters at election time.