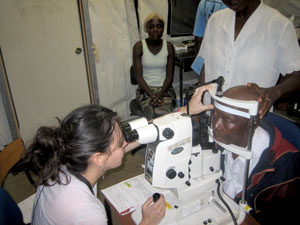 Lafayette ophthalmologist Suzy Azar treated hundreds of poor patients on a one-month mission to Liberia, where some people have never had access to medical care.

Children dying from diseases easily treated with modern medicine. Adolescents disfigured by a birth defect and shunned for years. Malnutrition caused by tooth disease, bacterial blindness, crippling war-caused trauma. All these are medical problems routinely treated in the U.S. But in countries disrupted by civil war or societies too poor to offer medical care to their citizens, sufferers seldom see doctors. A growing number of physicians from Acadiana have opened their eyes and hearts to the misery of the sick in countries from Africa to South and Central America. Here are just a few stories of how Acadiana’s doctors have reached out to those patients who desperately need their help.

In the civil war torn country of Liberia, many of the world’s poorest people have never had access to medical care. Poor sanitation has led to conditions unheard of in civilized nations like the U.S., such as trachoma, a bacterial infection that is one of the leading causes of blindness in the world; Burkitt’s lymphoma, a form of cancer that can be fatal if left untreated; and traumatic loss of eyes from gunshot wounds and fighting.

Before traveling to Liberia to treat patients on a hospital vessel through an organization called Mercy Ships, young ophthalmologist Suzy Azar had only read about these conditions in her medical school journals. When she arrived in the bomb damaged country for a one-month mission, she and an eye surgery team performed 10 to 15 operations per day, seeing 30 walk-in cases in between. During her tenure, she did between 200 and 300 laser procedures on patients. While numerous people were treated, many were left behind, hoping to make the list for the next Mercy Ships visit.

Since 1978, Mercy Ships has supplied specialists in orthopedics, ear, nose and throat, ophthalmology, and dentistry to treat poor people in developing nations. Each vessel is equipped with the latest equipment to perform surgeries and other procedures on patients. “The operating room had state-of-the-art equipment like we have here,” Azar says. “That’s one of the reasons I chose to go on this mission — because the equipment was so good.”

There are no ophthalmologists in Liberia, meaning that not even local doctors have been treated for their own eye conditions. People come for miles from five different villages for treatment by Mercy Ships’ physicians. An eye team of 30 volunteers screens patients to determine who needs surgical treatment. Lines are long, and tempers are hot. “They had people fighting in line,” Azar recalls. “They actually had to shut down one of the sites in the villages because of fighting. Most of these people, if they don’t have surgery, will become blind.”

While on the ship, Azar stayed in a private cabin on the third floor. The operating rooms were just a floor above. A few times a week, the team would venture out and explore the villages. But, because of scattered skirmishes, they never went out unaccompanied. When taking a ride to the beach one day, she and her colleagues were confronted by a United Nations tanker. “I don’t know if I ever felt completely safe,” she says. “There’s still a lot of unrest. You don’t ever want to be by yourself, especially at night. We always had somebody with us, and they would give us a cell phone whenever we left the ship.”

Despite the dangers, Azar plans to do more missions with Mercy Ships in Liberia or Bolivia. “I’m thinking about going next year,” she says.

While on a medical mission trip in Atoyac, Mexico back in 1993, a group of Lafayette dentists encountered a 3-1/2-year-old boy with a severe bilateral cleft lip and cleft palate. They brought photos of the child, Nabor Lopez Santiz, to dentist and plastic and reconstructive surgery specialist Dr. Russell C. Romero. Romero decided that the child should be brought to the states for help.

Working with the American Consulate, Romero and members of his men’s prayer group were able to secure visas for Nabor and his brother to come to Lafayette for six months. At that time, Romero performed three surgeries on the boy to correct the deformities. Today, Nabor is a happy, healthy 18-year-old, with barely a scar on his smiling face.

The group decided that it would be able to help more patients in this destitute area of southwest Mexico by bringing services to the people. So, these men helped to erect a medical clinic in Atoyac called Clinica Betel. Over four years, local volunteers gathered used equipment donated from area hospitals and secured funds for generators and other necessities.

One building houses doctors’ offices, a dental clinic and an eye clinic on the first level. On the second floor are two operating suites and recovery rooms. The third floor serves as a dormitory for the volunteers. In the second building is a third-floor living and kitchen area, where team members prepare meals for the hard-working health care providers. The second floor consists of patient hospital rooms, and the first is being refurbished for family member rooms.

Since 1995, Romero has traveled to Mexico once or twice a year with teams of dentists, general surgeons, and other volunteers to provide health care services to children and adults in Atoyac. He performed his first surgical procedure with local anesthetic and sedation on a 22-year-old woman named Eva, who was born with a severe lip and cleft palate deformity. After her parents were killed in an automobile accident, she was raised by an aunt, who kept her in a closet for most of her life. Fortunately, someone brought her to Clinica Betel, where she underwent several successful surgeries by Dr. Romero. Now, Eva helps out at the clinic whenever she can.

Yearly, Dr. J. Jerome Smith leads a dental team with 10 or 12 senior LSU dental students in Atoyac. Every October, Dr. Edward Graul, an ophthalmologist, takes a team of eye doctors and technicians south to do cataract surgeries and exams in Atoyac. Recently, local dentist Bill Keaty and his wife, family court Judge Phyllis Keaty, led a national group of pediatric dentists, who treated about 75 to 80 patients in three days.

On his most recent trip, in April, Romero was accompanied by 41 volunteers from Lafayette, Texas and  Arkansas, including local health care providers Drs. Ron Ritchey, Jerome Smith, Clay Duos and Michael Ziegler. During the week-long excursion, the dentists alone treated 250 to 300 patients from 4:30 a.m. until dark. Romero’s next trip will be in January with a team of about 40 people, including dentists, a anesthesiologist and three nurses.

After all of his medical missions, Romero believes that he is fortunate to be able to help people through his work. “I feel like there was divine planning in my training, because many times I go down to Mexico where our medical facility is, and patients are brought to me that otherwise would not have had a chance, would not get care and where, in their country, they are ostracized,” he says. “I’ve been able to go and touch these people. When a child has a problem and someone comes to take care of them, their parents really feel like we’ve been sent by God, and that makes us feel the same way. We are meant to be there doing what we are doing.”

Nicaragua is a Central American country of steamy tropical jungles, highlands, volcanoes and beaches, whose terrain is framed by the Atlantic Ocean to the east and the Pacific to the west, and is only slightly larger than the state of New York. Your morning coffee and the bananas on your cereal might come from there.

During the week of Oct. 11-18, 2008, a 60-volunteer medical team from the New Orleans Medical Mission Services Foundation or NOMMS, along with its cartons of donated supplies and materials, arrived at hospitals in León and Chinandega, Nicaragua, one of the two poorest nations in the Western hemisphere. Sixty percent of the population exists on $1 a day, and the people live in huts with dirt floors and go without shoes.

Only a few wealthy individuals have access to private doctors; the rest make do with state-run facilities under a program of socialized medicine.

The Louisiana team was there to perform surgery, do eye examinations and hand out eyeglasses. Unique to its organization, NOMMS brings a learning component to its Christian-based mission by teaching updated medical/surgical techniques using modern equipment to local physicians, who are not trained under the same standards as their North American counterparts.

NOMMS was organized in 2001, took its first trip in 2002, and is mainly composed of physicians and surgeons and other volunteers from New Orleans. Included among them, however, is Dr. Edward W. “Ned” Dauterive Jr. of New Iberia, who is board certified in general and vascular surgery. This trip he was joined by other general, plastic, ENT, orthopedic and GYN/oncology surgeons, as well as four medical students.

“I have gone on other medical missions in the past functioning more as a family physician, but I really prefer to be doing surgery instead, so this is my third trip with this group,” says Dauterive. “I brought my own instruments with me, and I was able to do 30 cases on patients that were pre-picked by our local colleagues, many of my procedures laparoscopic in nature, and some quite difficult like colon resections and bile ducts.”

In 2007 alone, NOMMS provided more than $7 million in services and supplies for medical relief to those less fortunate and has made eight trips over the years to the countries of Nicaragua, Ecuador and Panama. “We have to keep hopping from country to country depending on the political climate, and go to the one that has the least amount of upheaval at the time,” Dauterive says.

Sandra Aucoin, a registered nurse who works with Dauterive, also went on this trip, and both agreed that the local hospitals cannot provide the quality of care that we take for granted. Surgical supplies that normally are thrown away in the U.S. are kept and reused, and the autoclaving methods used to sterilize them may be suspect, says Aucoin. “There is a problem with insects in the operating rooms. There is someone whose job it is to ‘pop’ bugs and flies with a rubber glove if they get in,” she adds.

Both Dauterive and Aucoin say their patients are very appreciative, and that local medical personnel bend over backwards to assist them. “It really puts my life in perspective as to what is important,” Aucoin says.