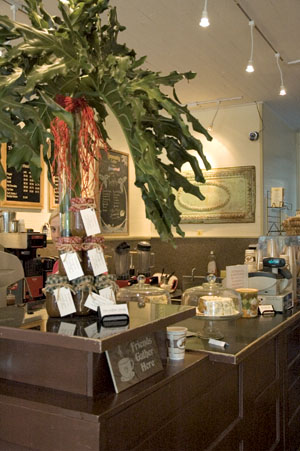 It’s hard to walk past a place with rockers out front — the kind your great grandmother had on her porch. You have to walk around them to get to the bubble-glass door that rattles when you open it. If the rattle alone doesn’t let people know you’re there, then your footsteps will as you creak across the worn wooden floor. Warmth covers you once inside. It may come from the mint-green walls or the espresso machine or the steam from the coffee itself. But, most likely it comes from Frank Dupuis, the owner of The Coffee Break.

“I wanted rockers out front,” says Dupuis, “because I wanted to bring back that front porch community feel to create a place where it looks inviting and you want to go in.” A taller, thinner, and more energetic version of Tommy Lee Jones, Dupuis grew up in Breaux Bridge. He’s a bi-coastal hospital consultant who never lost the country boy inside. “I always felt a connection here,” he says. “My friends living away ask ‘What are you still doing here? You’re so not Louisiana.’ My response has always been, ‘But I am. Really. I like it here.’”

The idea to open a coffee shop came to him a few years ago. “It was a selfish reason to start off with,” Dupuis says. “When I came home, there wasn’t a coffee shop for me to sit in, have a cup of coffee, and work on my laptop.” That was two years ago. Today, the Coffee Break is more than just a place to have a cup of coffee and work on a laptop. Sure, it’s got free Internet access, lattes, mochas, espressos, cappuccinos, all the standard coffee shop fare. But those aren’t the only reasons locals come.

Every Saturday morning at about 7:30 a.m. the Degeytaire sisters arrive. Sarah, Sharon, and Stacy rock out front relishing the coffee and their private time away from their children, the only time when they can complete sentences and share sisterly secrets. “We used to stay in Lafayette after our Weight Watchers meetings,” says Sarah, “but when the Coffee Break opened, we decided to come here. It’s got great coffee, and it’s in town.” Around 10:30 a.m., the sisters’ cousin Bob drives by in his new Ford.

“We are home,” Stacy hollers back.

The town’s rhythm is played out as certain as the next dip of the rocker.  Every Saturday morning Bud Peltier leaves his flower shop on the corner, stops to chat with the sisters a bit before he walks past them on his way to Simon’s Drug Store to buy cigarettes. Dressed in white, and carrying on a 100-year family bakery business, Sonny Champagne waives hello as he delivers French bread to Café des Amis. On any given day of the week, neighbors sip coffee and share the joys and pains of their lives. Dupuis can often be found in a rocker himself. “I sit out with these old men sometimes on the rockers out front and just hear stories from them. One day there won’t be these old men, and I’ll be the old man trying to pass on the stories that they told me. Collectively you keep that alive because they recollect, they reminisce, they have fond memories, and maybe some sad ones too. But you keep the culture alive just by doing that in the context of a little coffee shop.”

Just about everything is local at The Coffee Break and just about everything tells a story. The Hummingbird Cake is made by Dupuis’ mother. The coffee is Community. The jams — be it satsuma or hot pepper or Cajun music — come from Breaux Bridge soil. Dupuis’ love for his culture is reflected through the local artists — writers, visual artists, filmmakers, musicians — that he brings into the place. The artwork of Breaux Bridge natives Shine and William Sonnier — “Lee Roy’s Boys” as they describe themselves — whose art tells esoteric stories about the town, hang from the ceiling and the walls. They transform metal, glass, and other materials that were once on a car, bike, or house, into local cultural narratives mirroring the interior lives of the town and the people in it.

Unless you’re from Breaux Bridge you wouldn’t know that the corrugated tin piece, with a dust-masked young man pushing a lawn mower while pulling a wagon loaded with other lawn gear is Joey Robin who lives on St. Charles Street and who manicures lawns and parking lots for money — and a Dr. Pepper. You might not know that he comes from a hardworking family with special needs. Next time you’re in town, look for him. He’d love to talk to you.

And then there are the residents long gone who remain immortal only through the stories told at The Coffee Break. No one thought to photograph Ms. Alice of the long-closed City Hotel when she’d take her evening walks in her long-white nightgown contrasted by her even longer black hair. And even though no one thought to ask her what the daily numerical entries that appeared faithfully on years and years of calendars meant, folks at the coffee shop figure that the numbers were the morning and evening temperatures. And it is only through the collective memory of the community do the remains of Beno, the town drunk, live on, whose homelessness was nothing to be afraid of. My father survived to tell the story about the time my sister, 10 years old at the time, made him give Beno a ride home, a 2-mile drive that left my sister and Dad feeling good, and the car reeking of booze, body, and cigarette smells for another 20 miles.

Although anonymity may be scarce in a small town, the tourists or the occasional modern-day Beat traveler keep the locals on their toes. Dupuis’ guest book reads like a World Atlas — Paris, Dublin, Germany, Chicago, Michigan, Cecilia, Denmark. Although Dupuis plays down his role in creating a magical place, he does appreciate the magic. “The intersection of lives that takes place here is just incredible,” says Dupuis. “That a 13-year old kid from St. Bernard School across the street can come here after school and meet people from Austria filming The Coffee Break because it’s a quaint little place — I’m very proud to be a part of that.”

You never know who may drop by The Coffee Break. It may be somebody like vegan P.J. Chmiel who rolled in on a scooter after hours looking for directions during his tour of the Eastern U.S. and fell in love with Acadiana. It may be because Dupuis and his friends fed and watered him with food, wine, and conversation for a couple of hours. And then there were the British ladies who visited because of a YouTube clip of the Saturday noontime Cajun jam. “To think that the little bitty Coffee Break in Breaux Bridge had a YouTube thing that a 14-year old did on her camera that somebody in England saw and said ‘I have to go there.’ That’s wonderful to me,” says Dupuis. “That’s like spreading the love. How wonderful is that, that we can touch people’s lives that far away on just the magic that happens here?”

Writer Garrison Keillor says, “in a small town, it is like everyone has read the same book.” Through The Coffee Break, Dupuis has provided the town a reading room where locals gather to turn pages in their lives through conversations over coffee and muffins, sometimes flipping back to chapters written long ago.

The Coffee Break is located at 109 N. Main St. in Breaux Bridge and is open seven days a week.