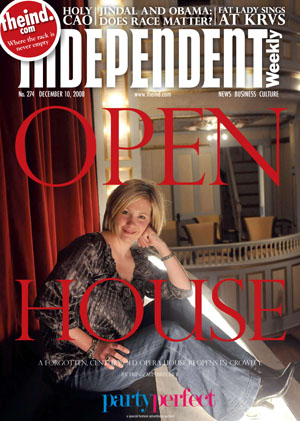 For 66 years, Crowley’s Dixie Hardware building at 505 N. Parkerson Ave. was known to locals as the place to register for fine china and pick up items like nails and screwdrivers. When L.J. and Carol “Chee Chee” Gielen purchased the building in 1999, the town discovered that Dixie Hardware had a secret. Originally opened in 1901 as Grand Opera House of the South, the auditorium and ballroom on the second and third floors of the hardware store had been collecting dust, nearly untouched for almost seven decades.

L.J. had heard about Crowley’s opera house, but it wasn’t until he saw the third floor’s dusty beaded board walls, pairs of rounded box seats and vast stage that he approached his wife with the idea of buying the building. The Gielens’ daughter, Kimberly Gattle, was teaching first grade in Gonzales at the time. When her father asked her to take part in the project, she agreed to quit her job and move to Crowley.

In the beginning, the family predicted the renovation would take about a year and cost $300,000, on top of the $500,000 purchase price. Now, almost a decade and millions of dollars later, the Grand has finally reopened its doors to the city.

“Mom says we were really naïve when we started,” says Gattle, 35, who serves as executive director. “I think Dad thought we’d make it more like a museum, which would have been nice to look at, but we wouldn’t have been able to use it. I said we had to do something more, but we didn’t know how much work it would take.”

In July 2000, Grand Opera House was established as a 501c3 nonprofit with a 17-member volunteer board of directors. In 2004, L.J. and Chee Chee donated the building to the nonprofit, and construction finally began. During this time, Gattle attended a course at New York University on how to start an arts nonprofit and job-shadowed Performing Arts Society of Acadiana Executive Director Jackie Lyle. Gattle and board members also began attending the Association of Performing Arts Presenters annual conference in New York City to look for booking opportunities.

Three phases and more than 30 building plan revisions later, the cost of renovation comes in at about $4.5 million. Gattle says the size of the space — all 33,000 square feet of it — and motivation to “get things right” made the project all the more difficult. “There was a lot of trial and error,” she says. “I think it took us a month to get a light socket, because it had to fit the period.”

Funds came from various federal, state and local sources, as well as donations from individuals, corporations and foundations. Former state Rep. Gil Pinac and former state Sen. Fred Hoyt helped to secure $1.15 million in capital outlay funds for the first phase of construction; while in office on the federal side, Chris John and John Breaux were instrumental in securing $148,000 through Save America’s Treasures, a public-private partnership between the National Park Service and National Trust for Historic Preservation. Gattle expects to receive another million from the state for the façade and to put finishing touches on the ballroom and balcony.

“The politicians have supported this wholeheartedly,” she says. “They know the value of this and the value for the state. They stop in and visit. [U.S. Sen.] Mary Landrieu has been here three or four times, and she’s seen it at different stages and understands the need for people to support this. My family can’t do it alone. It’s up to the community.” 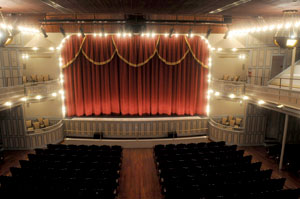 Crowley’s Grand Opera House reopened to the public Sept. 26, restored to its former glory and outfitted with gold-tasseled velvet curtains, replicas of the original seats and double pairs of box seats on either side of the stage.

Gattle is optimistic that funds — and people — will come. “I think that the opera house will be the main draw for Crowley, Acadia Parish and Acadiana,” she says. “There’s nothing like it anywhere else.” (The closest opera house of this type is in Galveston, Texas, and is currently closed due to damage from Hurricane Ike.)

After a decade of ongoing construction, fund-raising and research, Gattle and the board were ready to show the city of Crowley what they’d been working on. “For so many years it was always in the works,” she says. “It’s exciting to be able to tell other people that this dream we’ve had for so long is being enjoyed by everyone.”

The Grand reopened on Sept. 26 with New Orleans soul queen Irma Thomas singing to a sold-out house. Ticketholders were treated to a wine and cheese reception in the 3,000-square-foot ballroom, before taking a seat in replicas of the original opera house chairs. Select ticketholders got the chance to sit in the auditorium’s four preserved box seats, outfitted with plush armchairs covered in gold fabric and handpainted angel medallions that were replicated from an original piece of painted tin by local artist Rhonda Stevens.

“You could see the awe in the eyes, hear it in the voices of the people who came to our grand opening,” says board member and local financial consultant Sandy Melancon. “They were blown away and had no idea it would be such a lovely little theater.”

PASA’s Lyle, who serves on the opera house advisory board, believes the project goes beyond just providing access to the arts in Crowley. “I think the economic effect it can have on downtown Crowley will be similar to the effect Café Des Amis had on downtown Breaux Bridge,” she says. “For people to have performances to go to in Crowley, it’s almost back to the future because that was the happening hot place at the turn of the century. Some of the biggest stars of vaudeville performed there.”

The opera house’s current season includes eight performances, and ticket sales have been steady, says Melancon. Irma Thomas was followed by the Lafayette Concert Band and Russian pianist Vladimir Zaitsev, who plays a February encore. Freddy Cole, brother of Nat King Cole, performs a Christmas show this month, and Marcia Ball is on stage in January. “An Evening of Broadway” with three local vocalists is scheduled for February, and direct from China, the Golden Dragon Acrobats come to town in April. The season closes in May with Canada’s acoustic folk-pop group the Dust Poets. 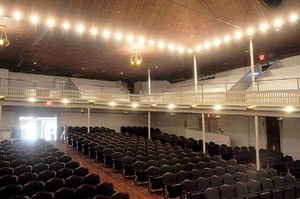 The opera house auditorium seats 350 in cushioned chairs on the floor and bleachers in the balcony.

The opera house is not set up to show movies, but the theater is available to community groups, like Notre Dame High School, which has booked the auditorium in March for its production of Phantom of the Opera. Gattle also wants to bring in local authors for readings and book signings. And guests can tour a small museum to view an original ticket, old photos, vintage clothing and the original “Grand” sign that once hung out front.

One of Crowley’s more than 200 structures listed on the National Register of Historic Places, the opera house architecture itself is worth the $5 tour. From the wood to the pressed tin, millwork and Florentine glass, “if we uncovered it, we tried to preserve it,” says Gattle. “I think we went beyond trying to get it back to the way it was. It’s up to code, but it doesn’t take away from the beauty that was here 107 years ago. It still feels old.”

Crowley’s other historic downtown buildings are currently in various stages of renovation. The city was designated a Louisiana Main Street in July of 1999, beginning a downtown revitalization project that combines historic preservation with economic development. Crowley is now in phase three, which involves a streetscape and sidewalk project, expected to be complete before next year’s Rice Festival in October. The final phase calls for plans to extend the redevelopment farther down North Parkerson to the railroad tracks and construct a Founders’ Park.

“We’re constantly working to improve our image and make downtown more enticing,” says Crowley Main Street Manager Rita Johnson. “The opera house helps us because their shows bring people into the community who may not have come to Crowley before. They come early, do some shopping and then go back and tell somebody about it.”

Johnson also notes that Main Street has generated $3 million in private investment from 2000-2005 and attributes this to a domino effect. “It’s like the Main Street program told us when we got started,” she says, “when somebody starts something, other people will come.” 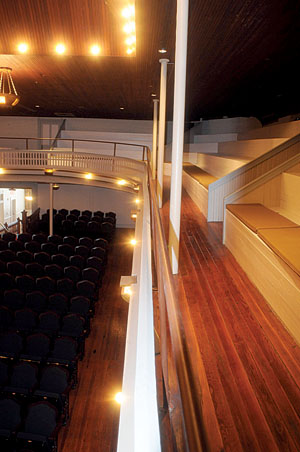 In addition to the opera house, the latest buzz in downtown Crowley is about Joppé Courtyard Café, located across the street. Co-owner Mark Harris says revitalization of the Grand and the streetscape project definitely influenced his decision to open a restaurant.

“They are bringing the downtown area back,” the 30-year-old native says. “The opera house brings a lot of people to this area, and it’s going to be lively. We are the only business that stays open after 5, and the turnout has been good.”

Gattle and pianist Vladimir Zaitsev had lunch at Joppé before his opera house performance last month, and audience members can hang out in the café’s New Orleans-style courtyard with a cup of coffee after a show.

Continuing down the street, the old Crowley Motor Co. building became the site of a new City Hall, Rice Interpretive Center, History of Crowley Museum and the J.D. Miller Recording Studio Museum last year. A block down, the Art Deco-style Rice Theatre was renovated in 1988 by the city and has been presenting Cajun and zydeco bands, Cajun comics and a Branson-style country music show once a month.

In the same block, L.J. Gielen also owns the Egan Hotel, which recently received a façade grant from Main Street. Opened in 1914 by the Egan family, early settlers of Crowley, the hotel has been vacant for more than 40 years. It originally housed celebrities who were in town to play the opera house, and L.J. has plans for a bed and breakfast, apartments and retail. He says the bed and breakfast should be open by 2010.

The Gielen family’s commitment to downtown investment is unwavering. “Crowley is stable,” L.J. says. “It’s a good place to raise your family. It’s close to larger cities, and we have good people.”

The family has a rich history of business and community involvement. L.J.’s brother, John Dan, founded Shop Rite convenience stores — South Louisiana’s largest convenience store chain — in Crowley in the 1960s, and L.J. also owns The Rice Palace restaurant and casino off of I-10. He and his wife are both benefactors of the Crowley Art Association, and L.J. sits on the Advisory Council for the College of the Arts at UL Lafayette.

Now a new generation is continuing the family tradition. “At first, I thought, this isn’t going to be rewarding,” Gattle says, “but there are opportunities for students to come and appreciate the arts, so it’s rewarding in a different way. Crowley has been lacking in so many areas for so long. Now, we’ve come to life, and we’re no longer going to be just that little town along I-10.”