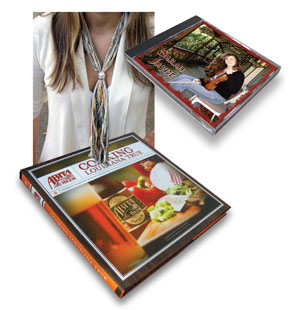 1. SCARF IT UP
Mignon Faget. It’s a classic name brand every Louisiana girl holds close to her heart. But I must admit “classic” was not the adjective that came to mind when I spotted the “Scarred Node Rag Scarf.” This organic necklace/scarf (I still can’t decide) is part of Faget’s new Bamboo collection, and the only reason I took notice of the peculiar mess of bamboo cloth, cotton strips, and freshwater pearls is because it was too bohemian and weird to be true of my trusty Mignon. However, outside the display case, the lovely secret of this piece revealed itself when I saw how beautifully it adorned my simple cream cardigan. This unique piece of neckwear with a sterling silver node will undoubtedly be an identifying favorite for years and years to come. It’s sold at Koi, $485, call 237-5833 for more info.

2. ALL IN THE FAMILY
It’s no wonder that 18-year-old Sarah Jayde Williams would follow in the footsteps of her forefathers and become a musician. At the age of 6, she began studying violin and two years later began learning the fiddle under the tutelage of her grandfather and fiddling elder statesman Hadley J. Castille. In her debut release, recorded with Castille, J. Blake Castille, Grammy Award-winning engineer Tony Daigle, and a host of other local notables, Cajun and Texas Swing covers all the bases, with renditions of Harry Choates’ “Jolie Blon,” Nathan Abshire’s “Bayou Teche Waltz,” Lawrence Walker’s “’Tit Yeaux Noir,” and Bob Wills’ “Blue Bonnet Lane” and “Keeper of My Heart.” For more info on Williams or to order Cajun and Texas Swing, visit www.sarahjayde.com.

3. TRUE BREW
The season’s best Christmas gift for the epicurean in the family, Abita Brewing Co.’s first cookbook, Abita Beer, Cooking Louisiana True, is now available. Cooking Louisiana True is filled with more than 60 recipes, from appetizers and sides to main course dishes and desserts, compiled from famous chefs and restaurants including Emeril’s, Commander’s Palace, Paul Prudhomme and Susan Spicer. All of the recipes, among them ceviche beer shots, Abita Amber pulled pork, and the decadent deep-fried beer-braised short ribs poboy from Jacques-Imo’s, incorporate Abita beer directly as well suggesting an Abita beer pairing to imbibe with each dish. The book also includes a section on the history of Abita beer, the process of making beer and a chapter titled “how to enjoy beer,” with notes on pairing and a “beer flavor wheel” chart. Abita Beer, Cooking Louisiana True retails for $34 and is available at all major book stores.