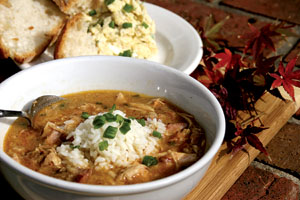 Jarred Richard didn’t grow up cooking. His mama, Delores Richard, and grandmother, Anna Mae Hanks, did that for him. He and his brother Ben just liked to eat. But when they left Scott for college at McNeese State University, 90 minutes away, he soon found out there was a big difference between home cooking and fast food. “It was too far to drive home for dinner every night,” he says. That’s when he picked up a black iron pot and a wooden spoon.

“I had a passion for Cajun food,” Jared says, “and I got a few tips from mama.” From there on, it was trial and error. He got a lot of practice feeding his brother, and after he graduated, a large family in Scott and Duson that would come over to see what Jared was cooking. These days cooking is his hobby, and he tries out all sorts of recipes for friends he invites over. His dinner table seats a dozen, and it’s rare that a seat is empty.

In 2007, when he was 29, he beat out some seasoned cooks, winning first place in the Black Pot Cookoff with a rabbit sauce piquant. This year he decided to enter again, but rather than duplicate his gold medal entry, he came up with an entirely different dish: hen and smoked turkey neck gumbo. Jared took the top honor again with his gumbo, enjoying the irony surrounding his latest win. In 2007 he had the only rabbit entry, but this year there were several rabbit dishes. “It made me feel good, that I could win with something like hen,” he says.

At the Black Pot Cookoff, stews and fricassees are pitted against gumbos in a single category. The competition is stiff, smothered dishes filled with highly-flavored game competing against domestic yard birds. It takes an experienced hand with seasoning as well as skill in cooking in black cast iron over an open fire to pull off a victory.

I’ve been one of the judges since the festival’s inception three years ago, along with Chef Pat Mould and cook extraordinaire Rick Guidry. Jared’s gumbo was the first entry we tasted this year. Yes, we have a point system, and no, we have no idea whose entries we’re tasting, but I do have to say we were all blown away immediately by the gumbo. When we totaled our scores, none of us was surprised that it won.

Jared shared the recipe with The Independent Weekly. Every good cook has a favorite butcher, and he likes his home town market, Early’s in Scott. In addition to stewing hens, Early’s keeps smoked turkey necks and wings on its shelves, and Jared uses its house seasoning (which I think is one of the keys to this award-winning gumbo).

I took the recipe home and gave it a test drive in an ordinary pot on an ordinary stove. What you will find is that it’s made with a medium roux, which gives it a nice nutty flavor, very different from the coffee-colored roux of dark Cajun gumbos. The hen contributes depth, and the smoked turkey adds both flavor and a textural element. It has, in foodie terms, a nice creamy mouth feel not unlike the realm of turkey gravy, its close cousin. Jared recommends serving it with rice. I opted for homemade potato salad. Chacun à son goût.

Make a medium brown roux with the flour and oil. Add the onions and bay leaves and stir for about 10 minutes, until wilted and starting to brown. Add the chicken broth, stirring to incorporate, then slowly add about 4 cups of water, to make a soupy broth. Add all the meat, then add enough water to cover. Simmer for about 2 hours. Add water as needed. When the hen starts to get tender and fall off the bone, take the gumbo off the fire. Remove meat. Discard bones and skin. Skim off fat, add sliced green onion tops and return meat to pot. Simmer for 5 minutes. Check seasoning. Serve with rice.