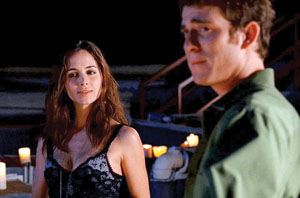 Barkley Michaelson really only wants to leave cannibalism behind. The anthropology student with the $2.57 bank balance is struggling to finish his doctoral thesis — examining what makes cannibalism taboo and what makes it tantalizing — and trying to stay as far away as possible from the suffocating shadow of his jackass genius dad.

His fearsome father is Eli Michaelson, celebrated chemist, serial philanderer and insatiable ego. He must be brilliant: his long-suffering forensic psychiatrist wife Sarah sticks with him, even though his interest in his female students extends well beyond the classroom and his interpersonal communication consists mostly of insults. Another clue that Eli’s kind of a big deal? The announcement that he is now a prizewinner, his work in something called single molecule spectroscopy catapulting him to Nobel’s rarefied air.

In victory, Eli is insufferable, gloating to his wife, his son and his colleagues. When Barkley slips out of his father’s celebration to meet up with hot and hostile poetess City Hall, Eli hardly notices. He is decidedly more aware, however, when his flaky failure of a son fails to show up on time for the family’s flight to Stockholm. The Nobel laureate sinks deeper into his kneejerk narcissistic nastiness, so much so that he ignores not just one, but two, ransom calls from the young psychopath who has nabbed his son and wants the Nobel prize money in exchange for his life. Seriously. Eli hangs up on the call twice, so certain is he that this is just childish, jealous Barkley acting out. Eli’s interest in the situation gets instantly graver (even if the tone of Nobel Son does not) when a bloody thumb is FedExed to the hotel where he and his wife are staying. The chemistry professor is now caught up in a crime caper. Turns out, though, it might just be one of his own making.

Writer-director Randall Miller is currently best known for his film festival fan favorite Bottle Shock, also released this year featuring many of the same players as Nobel Son. Bottle Shock is being taken borderline seriously, a boon for Miller since Nobel Son has been nowhere near as lucky. The story of the Michaelsons is little more than an amusing lark — and one that late in the game mistakes complications for script smarts. It’s a mess with an all-star cast, a humdrum who-done-it with an occasionally satisfying off-kilter sense of humor. Unlike Eli, it’s no prizewinner. But also unlike Eli, it’s honestly not so bad to be around for an hour and a half.

The cast is rather apt, if occasionally over the top. As the chemist in question, Alan Rickman practically perspires pomposity. He’s actually taken the sneer of Harry Potter’s Professor Snape and topped it with an even more unlikeable leer. Clearly reveling in his thespian freedom, Rickman flounces, whines, yells, his quietest mode a kind of slouchy cross-armed pout. In a brief but memorable appearance, Buffy the Vampire Slayer’s Eliza Dushku makes City Hall a force not to fight but to fancy; her dark poet/artist is crazy like the cunning fox she turns out to be. And Bryan Greenberg — the Nobel son of the title, late of TV’s October Road — ably straddles the line between disappointing and disappointed son, his dialogue peppered with appropriate anthropophagous aphorisms: the moral difference between eating a dead man or a live one, the fact that, to a cannibal, a vegetarian would taste better than a meat-eater would.

Miller’s direction is spotty, his camera a tad too shifty and his shots a touch too blurred at times. He’s obviously going for the illusion of motion, but achieving only a seasick reality. The story starts off gangbusters, only to slowly lose speed and focus, sagging in the middle before eventually gasping for a second wind in the form of a final twist. With his double crosses and triple crosses, Miller makes an all-too-common mistake in crime caper cinema: curving a story around on itself sometimes only creates confusion. Nobel Son proves once again that a narrative that’s hard to follow isn’t always a narrative that’s hard to beat.

In the end, what works for Nobel Son is what works for Eli Michaelson, and that is chemistry. The almost-A-list cast — which also includes wife Mary Steenburgen, neighbor Danny De Vito, colleague Ted Danson and cop Bill Pullman — plays together well. But more important than all of those interactions is a certain kinesis in the script that charms, even when it fails. Characters group and regroup with hate and haste and humor, and even when the script fails to support their actions, the moves themselves can provoke a quite pleasant and momentarily positive reaction