An alien arrives with an extreme idea of course correction in Scott Derrickson's unnecessary but entertaining remake of The Day Earth Stood Still. 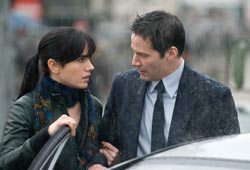 The Day the Earth Stood Still should never have been remade. The 1951 film, directed by the legendary Robert Wise and starring the glorious Patricia Neal, stands as a sci-fi classic. It's an odd film, maybe not with the best script, maybe not with the most memorable performances. It's easy to imagine how it could have slipped away, an interesting Cold-War-themed B-movie about Earth's close encounter with a being from another planet — and the human race's even closer encounter with annihilation.

For some reason, though, the movie, its visuals and certainly its one classic line of alien dialogue — "Klaatu barada nikto" — stuck. The movie's mysterious magic has somehow survived the onslaught of latter-day Hollywood, whose science fiction is so often now as divorced from fantasy as it is married to action/adventure. Otherworldly stories are rarely filmed the same way they used to be, with eerie imagination and graceful simplicity. Again and again these days, we end up watching action movies that just happen to have sci-fi elements around the edges. Our celluloid ideas about space and the future have gotten louder and dumber, which admittedly can be fun. But those big, booming ideas are something else altogether, something that may never organically produce anything as timeless as The Day the Earth Stood Still. We will certainly never be able to recreate such a particular sci-fi cinematic moment, that certain time and place that no longer exists, that illusion of a world that is simply no longer possible.

So what do we do? Ignore these truths we don't like, and remake The Day the Earth Stood Still. Perhaps we do it in homage, perhaps we do it out of hubris. Unable to simply cherish something old, we borrow it to make something "new," a different version of this thing that we supposedly love. And then we diminish it by addition. (This self-centered phenomenon certainly isn't restricted to sci-fi, to be sure. See — or actually, on second thought, maybe don't see — the completely unnecessary 2004 remake of The Manchurian Candidate.)

Operating under such a scenario, the most that movie fans with long memories can hope for is that the do-over stops short of desecration. And to director Scott Derrickson's credit, he at least does that. He adheres to the overarching original story, written by Edward H. North and based on a Harry Bates short story. In the current incarnation, the earth stands still for a second time, as Klaatu arrives and repeats his cryptic and ultimately wise warnings. And robot Gort stands again in silent menace, as humans attempt to prove their capacity for change.

The reasons for Klaatu's visit, however, have changed. In the original, the advent of atomic power prompted his intervention on behalf of other civilizations concerned for their own survival. In Derrickson's telling, written by David Scarpa, Klaatu comes not to save others from Earth, but to save Earth from its own inhabitants. Planets capable of sustaining life are few and far between, he explains; mankind must not be allowed to continue to slowly destroy its home. It's up to Helen Benson, this time an astrobiologist, and her son to make man's case to Klaatu.

Keanu Reeves was factory-made to play the part of Klaatu. Maybe that's because it's the role he's been unintentionally playing in so many movies already — looking good walking in a suit, delivering his dialogue with a clipped cadence, dark eyes keeping him at an emotionless disconnect. Once the filmmakers opted to make Helen a scientist, Jennifer Connelly was a wise choice; the actress (Waking the Dead, A Beautiful Mind) exudes an easy intelligence. Helen's stepson Jacob (Jaden Smith) is the film's weak link, partially because the kid isn't the actor casting agents apparently mistake him for and partially because the script is weakest when delving into his troubled relationship with Helen. In part, it's the unfurling of this relationship that supposedly finally reaches Klaatu, but the writing simply isn't strong enough to carry that idea.

But for all the script problems — with Helen and Jacob, with Klaatu's dawning realization that there is more to man than meets his interstellar eye — there is something comfortably retro about The Day the Earth Stood Still, even with its computer-generated effects. Derrickson and cinematographer David Tattersall keep a consistently fake look throughout the film, a muted palette that makes all of the CGI completely acceptable. The scene where Klaatu first lands in Central Park is stunning, light and shadow effortlessly evoking both the original film and Close Encounters of the Third Kind. And when the sadly sidelined Gort is finally set in motion, the filmmakers reveal their most satisfying tweak, an old-school, Old-Testament idea brilliant in its simplicity. It's the remake's only true original moment, and it makes you wish that sci-fi — like Helen's Earth — can actually be saved.