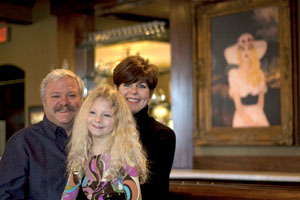 Owners Steve and Suzi Santillo, and the other jolie blonde in their lives, their daughter Isabella.

Paul Mudge’s kitchen is on fire. The 32-year-old chef took charge of the frying pans at Jolie’s Louisiana Bistro, restaurateur Steve Santillo’s new upscale eatery, in October, and he hasn’t had a chance to let things cool down — not that he wants to. “In the beginning, we were getting here at 8 a.m., cooking our way through the whole menu, and going home smelling like pork chops about 10 at night,” he says. That was before the restaurant even opened.

Santillo and his wife, Suzi, are also part owners, along with Jacques and André Rodrigue, of the popular Blue Dog Café, a Pinhook Road restaurant as identifiable for its George Rodrigue artwork as the trademark smoked-duck spring rolls and seafood-stuffed portabellos. (The Rodrigue brothers are also investors in Jolie’s.) With its roisterous happy hour bar scene and jazz brunches, Blue Dog offers a laid-back atmosphere and relaxed food. But even with Blue Dog and his private law practice to oversee, Santillo always wanted to run a high-end, white tablecloth affair. Nonetheless, he didn’t anticipate the quick romp through a major renovation and birthing a menu, from the toothsome twinkle in his eye to a multi-course offering, in the space of five months.

The building itself has a notorious past. Years ago, it housed the original location of Ruth’s Chris in Lafayette. In recent times, where Lafayette’s oil magnates of the 1980s once dined on prime cut, exotic dancers provided a different type of New York strip at a joint called The Dollhouse. Santillo has one of the club’s well worn poles tucked away under the bar to prove it.

“We walked in, and there were mirrors everywhere,” says Suzi Santillo, “but the building had good bones. We loved the pressed tin ceiling, and the staircase is beautiful.” 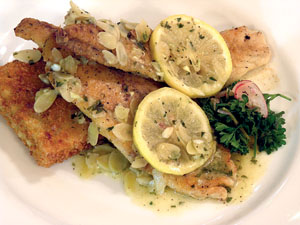 The couple plunged in, centering the bar, and a portrait of Rodrigue’s “Jolie Blonde” to welcome diners. Down went a wood floor, up went ceiling fans. A cozy nook with a fireplace and rosy nude are a nod to the past. The kitchen is visible through an arched window, where hot plates are expedited, straight to the tables. But as late as October 1, Santillo still didn’t have a chef. “I’m taking my time until I find the right person,” he told The Independent Weekly two months ago.

That’s about the time Paul Mudge walked through his door.

Mudge says his favorite Christmas present the year he turned nine was a Better Homes and Gardens Cook Book from his grandmother. She called her grandson once a week to encourage him to try out new recipes. He still has the book. He started looking for work while he was in high school. “I did everything,” Mudge says of his after-school jobs. “I volunteered at the hospital, worked as a bank teller. But the kitchen is where I’m happy.” His first professional cooking job, at 16 years old, was as a grill cook at McDonald’s. “Oddly enough, it didn’t scare me away,” he adds.

A stint at Bennigan’s led to an apprenticeship under chef Joe Gonsoulin at Le Triomphe’s club restaurant. Gonsoulin taught him the basic tenants of cooking — why food works, what flavors combine. “Joe gave me a lot of freedom to experiment, to try and find my wings,” Mudge says. After four years of intense training, Mudge left to help out a buddy with an Italian restaurant in Narraganset, Rhode Island for a few months, before walking into the kitchen at Lafayette’s little gem of a French restaurant, Gilbert’s. That was eight years ago. Gilbert Decourt gave Mudge a job and an education, and in turn, Mudge followed the talented chef and food scientist to Barraca’s, City Club at River Ranch and finally to the Cajundome, where Decourt is executive chef. Six months ago Mudge hit the culinary ceiling at the dome, with nowhere left to rise he took a job as assistant manager at Zea. But as good as the food is there, the corporate world of fixed recipes and ironclad menus wasn’t where he wanted to be.

Santillo, hunting for a chef, called Decourt, who gave him Mudge’s phone number. And despite what Mudge describes as a disastrous evening of cooking for Santillo and some friends (Santillo says the food was great), Mudge was hired. He thought he had six weeks to develop a menu for Jolie’s. In reality, amidst flying sawdust and ringing hammers, Mudge had 2 weeks to assemble a crew, design a menu, keep things flowing and stay within budget. Jolie’s opened Nov. 18. 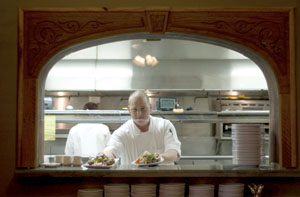 Chef Paul Mudge expedites hot dishes from the kitchen to the table.

The menu is what Santillo describes as “nouvelle Louisiana.” Inspired by local ingredients like oysters, gulf shrimp, lump crabmeat, redfish, figs, satsumas, sweet potatoes and Abita beer, Mudge has put together a menu that borrows both from New Orleans and France, while creating signature dishes all his own.

You can make a meal on the appetizers which lean heavily on Gulf seafood. Classic baked oysters Bienville and Rockefeller are joined by a house creation, Oysters Jolie, which is a creamy blend of andouille, crawfish and corn laced together with Italian mascarpone cream cheese. Oysters Three Ways assembles two of each, a shared starter for two. Mudge’s barbecued shrimp are a cooked in a butter, rosemary and Abita beer sauce; it’s got nice balance, and there’s lots of sauce to dip the accompanying bread in. The other seafood stunner is mussels in a delicate garlic cream sauce. Ask for a spoon, you’ll want to drink the sauce. The frog legs fricassee is based on an old Italian recipe called Puttanesca. The story goes, the ladies of the night of Naples, heading home late were tired and needed a quick dish of pasta for dinner before they went to bed. So a fast, pungent sauce was devised: tomatoes, garlic, anchovies, olives, capers, parsley and olive oil. Mudge adds artichokes, never a bad idea.

There’s an abundance of fish dishes which treat the fresh fillets with respect. A simple redfish amandine, a classic, will take you to the Big Easy, and the trout Provencal, with its tomato and garlic notes, is right on target. But where Mudge blows the roof off of the restaurant is with his sides. Whatever you order, ask for the smoked paprika and corn grits cake or the okra and tomato confit polenta. Both of these are basically flavored grits cakes, fried to a marvelous crispness. It’s southern cooking, spiked with a nouvelle palate, that takes our beloved grits to new delicious heights.

If it’s meat your after, Mudge has lined up half a dozen dishes focused on cuts of grilled beef, duck, lamb and pork chops (he brines his, which makes all the difference), sauced with fruit and herbal glazes. Again, not too fussy, and again paired with terrific sides. Go for the sweet potato and andouille hash browns which complement everything. And now that it’s winter, and ostensibly cold, Mudge bakes a duck leg confit into the queen of bean dishes from southwest France, cassoulet. White beans deeply infused with the flavor of meat stock, herbs and preserved duck is a most satisfying dish on a chilly night.

If you’ve got room for dessert, Mudge makes a French classic — an entire pear, simmered in spiced red wine until tender is sauced with a vanilla flavored Creme Anglaise.

There’s a lot to love about Jolie’s. Santillo is an experienced restaurateur, and it shows both in the warm design of the front (actually more Suzi’s baby) as well as the attentive service. The choice of location is sharp as well. Pinhook between the bridge over the Vermilion and University is Lafayette’s locally-owned restaurant row. Café Vermilionville, Ruth’s Chris, Catahoula’s, Blue Dog and Zeus all draw regulars, who are accustomed to dining under the century old oaks of old Lafayette. What’s not to love about the addition of a buxom blonde of a restaurant? Especially one as jolie as this.
_
Jolie’s Louisiana Bistro is located at 507 W. Pinhook Rd. Call 504-2382, or go to www.jolieslouisianabistro.com for more information._