John Patrick Shanley brings his Pulitzer Prize-winning play to the big screen with some success. 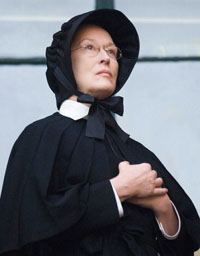 If doubt is the ravenous wolf that circles outside, certainty can be the angry lion roaring within. When something cannot be known for sure, trust becomes a tricky proposition, a double-edged sword that can become either a hiding place or an arsenal. Challenged faith - in God, in man, in ourselves - is capable of bringing forth great fertility. But challenged faith bears many fruits - and one of them is uncertainty. If what we believed was only what we believed, our own internal struggle or solace, things would be infinitely simpler. But the things we believe, or don't believe, are concretized in our actions. So without absolute proof either way, how do we decide what is true and right? Experience? Intuition? Our own persuasions? Someone else's?

This kind of faith - and its constant counterpoint - are the subjects of John Patrick Shanley's Doubt. The play has been one of recent Broadway's biggest and won a Pulitzer Prize for Shanley and Tony Awards for its director and two of its starring actresses, as well as best play honors. It was widely praised as a tight drama of spiritual tension, the kind of staging that created contemplation and discussion far beyond the theater lobby. This winter, its creator brings Doubt to the big screen, his self-scripted, self-directed film adaptation is fine but flawed. (The project's overall polished pedigree, however, remains firmly intact with a slew of Golden Globe and Screen Actors Guild nominations already announced for the film.)

Doubt is the story of Sister Aloysius and Father Flynn. Or, more accurately, the story of Sister Aloysius versus Father Flynn. The nun's harsh features match her hard edges. Her black Sisters of Charity bonnet tied tightly beneath her pointed and eternally disappointed chin, Aloysius exerts an iron rule over St. Nicholas school. Before we ever see her pinched face and pursed lips, we feel her withering presence. As Father Flynn speaks from the pulpit during an early-morning mass, Sister Aloysius silently stalks the outside aisle of the church, only a hiss and a hand to the chattering children she snaps into line.

Even in her vigilance, she still hears the words of Father Flynn, however, a jovial and beefy blond who believes in accessibility and relaxed rules and on this morning speaks of hopelessness and uncertainty - not with judgment but with understanding. Aloysius is not amused; most importantly, she begins to doubt Father Flynn. Conversely, her young counterpart Sister James is enthralled. The sweet and soft-spoken history teacher likes this young priest and his new ideas. But she also fears the grim Sister Aloysius, who has asked the nuns to be her eyes and ears. When Sister James notices Father Flynn taking a particular interest in Donald Miller, the school's only black student, she reports it to her superior, suspicion bubbling up in her still-innocent eyes. And so the stage is set for a soul-shattering confrontation, where Aloysius' certainty and righteous fury run roughshod - and headlong into Doubt.

Shanley's story is imagined as an ensemble piece, but the film version ends up all about Aloysius. Meryl Streep creates a powerful performance too large and deep for the confines of supporting players. Even Philip Seymour Hoffman's nuanced, controlled Father Flynn seems an afterthought in the face of Streep's almighty artistry. It's a full-bodied outing for much-lauded actress; she uses her eyes, her hands, her posture, her voice. At times, even her "hmms" almost carry more weight than Shanley's words.

Shanley wrote an amazing, inspired part when he created Aloysius, a frightening yet fragile nun from whom even compassion seems cruel. It's as easy to hate her Aloysius in the beginning as it is to love Hoffman's Father Flynn. That's a trap that snares Amy Adams' Sister James. In a field of fine performances - it's also worth mentioning the moving Viola Davis, as the boy in question's mother - Adams is the weakest link, her wide eyes and trembling lip merely a stand-in for innocence and idealism. She has one moment of pure performance, and that's when Sister James speaks up for herself in a fit of pique; there is a slight look of surprise in Adams' eye, an I-can't-believe-this-is-me realization that rings far truer than anything else she manages to do in the course of the film.

Shanley's direction is unsure; too often, he incorrectly thinks showy down-low or tilted camera angles make his featured faces more interesting. He mistakes spooky wind and driving rain for subtle harbingers. Strangely, for a man of words and character creation, he's stronger with still lifes and fleeting moments: the windswept courtyard of St. Nicholas, the nun's austere dining table, the boys' club atmosphere as three priests share a hearty laugh and a bloody roast beef. Through these and more, Shanley creates a beautiful bleakness that perfectly showcases his thoughts about Doubt, what it is and what the hint of its very existence can do to even the best among us.