A victim of the credit crisis, a major apartment complex stalls. 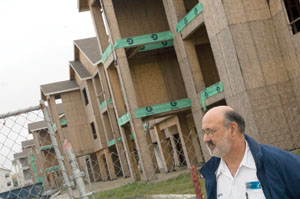 LCG permit inspector Larry Manuel at The Reserve at Acadiana, where work has stopped.

The credit crunch gripping the nation has skidded to a halt one of the largest commercial construction projects in Lafayette. The Reserve at Acadiana is a huge apartment complex going up adjacent to the Mall of Acadiana. Or it was going up hammer and tongs until recently. The project stalled this fall. "Well all of a sudden, we were in the middle of inspections, and we hadn't heard from these people and we stopped by a couple of times, and they were pretty tight-lipped about it," says Larry Manuel, Lafayette Consolidated Government's permits inspector.

The complex is owned by Baton Rouge-based Peek-Howe Real Estate Inc. and is being built by PHL Construction LLC. The Louisiana Secretary of State's office lists Arthur Lancaster as the PHL's manager and Robert Peek and Lacy Howe as its members.

The Reserve at Acadiana is slated to be a 276-unit apartment complex consisting of one-, two- and three-bedroom apartments with rental rates ranging from $950-$1,495 per month. The project was valued at nearly $15 million. Construction was halted due to "a slowdown in funding because of the credit crisis," says Lancaster. He says funding is now back in order, and construction should start after the first of the year.

While smaller projects stop and start, says Manuel, this is by far the largest project to come to a halt. Before construction recommences, Manuel says several concerns need to be addressed. While the walls and roof are up, windows and doors have not been installed in all the units, siding hasn't been completed, and there are places where black felt paper hasn't been installed, leaving plywood exposed. Rain poured in the openings during some of the recent storms in Acadiana. "I'm concerned about the structural integrity of the wood that's been exposed to the weather," says Manuel. There are issues with mold and mildew contamination as well. Manuel says the city will require a mold remediation certificate before construction can resume.

Barring any unusual weather, Lancaster says he is confident the project will be complete in six months, by late July.