Much like the holidays, egg nog comes but once a year. So drink it up while you can. 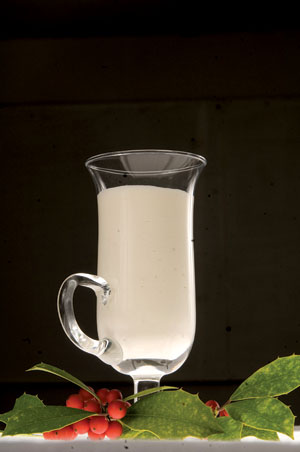 Like fruitcake, eggnog is one of those once a year treats, and you either love it or hate it. Or perhaps, you’ve never had anything better than the store-bought kind from the dairy section at the grocery store. While that will do in a pinch, with a shot of bourbon and a hefty dollop of whipped cream added for the requisite milk mustache every eggnog drinker must wear, don’t give up on eggnog until you’ve tried the homemade kind.

The history of this Christmas drink most probably goes back to England. Nog or noggin, from Middle English, (sounds like something Bilbo Baggins would drink out of) is a carved wooden cup. Fresh eggs were hard to come by in the coldest months, and expensive milk was something a commoner in London probably never tasted. Sugar was another luxurious commodity, imported from the plantations of the New World. Mix the three, with a healthy dose of spirits to kill bacteria in an age before refrigeration, and you’ve got a nice syllabub only the aristocracy could afford to guzzle.

Here in Lafayette, the dutchess of eggnog, Charla Gail Glod, gives away quarts of her secret quaff to her friends. She only makes it for Christmas and guards the recipe with her life. We tried, but we couldn’t cajole it out of her. However, Alton Brown, culinary comic and host of the Food Network show Good Eats has a splendidly simple recipe he offers to the world of nog gloggers.

In the bowl of a stand mixer, beat the egg yolks until they lighten in color. Gradually add the 1/3 cup sugar and continue to beat until the sugar completely dissolves. Add the milk, cream, bourbon and nutmeg and whisk to combine. Place the egg whites in a different bowl of a stand mixer and beat to soft peaks using the whisk attachment. With the mixer still running gradually add the 1 tablespoon of sugar and beat until stiff peaks form. Whisk the egg whites into the mixture. Chill and serve. Makes 6 to 7 cups. Drink up.