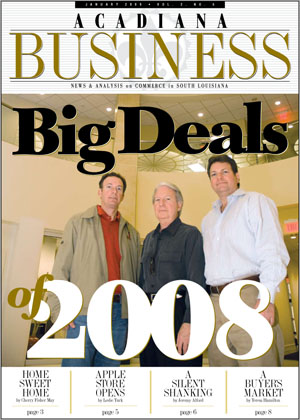 As uncertainty looms over the state’s oil and gas industry, what the future holds for the oil-dependent Acadiana economy in 2009 is anybody’s guess. This past year, however, is filled with compelling stories and new developments that illustrate our entrepreneurial spirit — that level of drive and optimism that will get us through whatever bumps we face in the next 12 months. Listed in no particular order, these are the Big Deals that steered Acadiana’s economy in 2008.
**
If You Build It**
When Cecil Trahan said he was going to lower the upstairs floor of the old Abdalla’s building in the Oil Center to make the upstairs leasable square footage, more than a few people in construction and real estate didn’t think he could pull it off. The building itself cost $4.5 million, and for the investment to make money — if the renovation could even be done — he’d surely have to lease up the entire building. Trahan and his two sons, Todd and Chad, are now the proud owners of 900 Plaza, a fully-leased, beautifully renovated 70,000-square-foot building with an upstairs floor that was indeed lowered. Full-service downstairs space is leasing for $22.50 per square foot, with the upstairs going for $19.50. And while the Trahans won’t say how much they invested in the renovation, it was likely a multi-million-dollar overhaul. The final 19,000 square feet were taken by Medco Energi, joining Business FirstBank, Prize Petroleum, Lantec of Louisiana, attorney Tim Bradley and LHC Group — the largest tenant with 24,000 square feet. “It was a long, long project, and we did it right,” Todd says. “Obviously it was a building that was needed in the Oil Center. We bought it as a spec building, but we did our homework on the market.”
**
Gone Public**
In an atmosphere of uncertainty for the nation’s economy, Home Bancorp, the newly formed holding company for locally-grown Home Bank, plowed forward and successfully completed its IPO in connection with its conversion from a mutual to stock institution. The company issued 8.93 million shares of its common stock, raising almost $90 million. Now sitting on all of that cash, Home Bank should begin making some moves in 2009.

Let’s Make a Deal
The auto industry’s troubles have already impacted local dealers and the dust may not have settled just yet. On Sept. 25, The INDsider broke the story about a deal in the making between Acadiana Dodge and Lafayette Motors. The following day, Lafayette Motors President Hunter Trahan confirmed that his family’s 97-year-old dealership — the oldest in the state — was being sold to Acadiana Dodge as part of Chrysler’s ongoing strategy to trim and combine dealers. Lafayette Motors’ inventory of vehicles has since been moved to Acadiana Dodge’s Evangeline Thruway dealership. Within no time, speculation surfaced that the Mann family, owners of Louisiana Motors and Saturn of Lafayette, was also looking to sell some of its assets. Acadiana Business has since confirmed, through a source familiar with the negotiations, Saturn was sold to Courtesy Motors. The sale of the family’s Cadillac and GMC dealership in New Iberia is scheduled to close in January, also to Courtesy. The Manns will hold onto some assets, including the body shop and service and parts department at Pontiac Point downtown. They reportedly are also planning to open a body shop in New Iberia.

Ace in the Hole
On March 28 The INDsider broke the story on negotiations between Acadiana’s largest privately held companies, the Ace Group, and Welsh, Carson, Anderson & Stowe, a New York-based private equity investment firm. At the time, neither party would comment on the talks, but the two entities confirmed in a late April press release that they had joined forces. The Ace Group includes Ace Transportation and Dynasty Transportation, founded by Lafayette businessmen Bill Busbice and James Glasgow. WCAS also bought a controlling interest in Lafayette’s Venture Transport in 2007; WCAS’ Web site pegs Venture’s annual revenues at $178 million, and the Ace Group is a significantly larger operation. Financial terms of the Ace deal were not disclosed, though the release stated that Busbice and Glasgow remain “significant shareholders in the company.” Founded in 1979, WCAS focuses on investments in the business and information services and health care industries and manages a whopping $16 billion of capital.

Good Medicine
Also making its second appearance on our list of Big Deals is Our Lady of Lourdes, which earns a spot in 2008 for breaking ground on its new 45-acre site at Ambassador Caffery Parkway near Verot School Road. With the strength and commitment of the Franciscan Missionaries system behind it, the new hospital will be built regardless of economic factors, according to Lourdes officials. Lourdes, however, remains tight-lipped about the total cost of the project. On the heels of dirt turning at the new site came a mid-November announcement by Lafayette General, Lourdes’ chief competitor, of a complete renovation of its Oil Center hospital at a price tag of $75 million. These projects will fuel commercial construction in Lafayette in 2009, a time when both residential and commercial construction are expected to slow dramatically.
**
Horsing Around**
Apparently the oil business is still a very good place to be — at least if you’re Dynamic Industries’ owner Mike Moreno. Moreno, who lives in Houston but has been building a mansion in River Ranch for the past several years, paid a staggering $14 million for a 12-year-old thoroughbred broodmare at the Fasig-Tipton November select mixed sale in Lexington, Ky. It was a world-record price, according to The Blood Horse magazine. Moreno actually already owned 70 percent of the mare, but his partnership was dissolving. Better Than Honour is the dam for 2006 Belmont winner Jazil and Rags to Riches, the first filly in a century to take the Belmont when she won in 2007. The previous record sale for a broodmare sold at public auction was $10.5 million. Moreno, who owns Southern Equine Stables, spent a total of $23.5 million at the November sale. He is said to be inching toward becoming one of the top five thoroughbred owners in the world. (This is Moreno’s second year in a row to make the Top 10 list, having placed last year for selling a minority interest in his company to D.C.-based global private equity investment firm The Carlyle Group for an estimated $200 million.)

High Flying
FlightSafety International invested $120 million in a flight training facility at LEDA’s Northpark Technology Center and plans to employ 40 people within its first year. The company, owned by billionaire businessman Warren Buffett’s Berkshire Hathaway Inc., has agreed to create 100 jobs over the next five years — at an average salary of $50,000. The 70,000-square-foot facility provides flight simulator training for helicopter pilots and other aviation professionals. While the New York-based company has about 40 flight training operations across the country — where more than 75,000 pilots, technicians and other aviation professionals train annually — only a few focus on helicopter training, making this facility a great fit for the offshore oil industry Lafayette serves. The first day of classes will be Feb. 6.

Top of the Class
Lafayette landed not one but two home-grown businesses in the top 10 of Forbes magazine’s list of America’s 200 Best Small Companies. PetroQuest Energy ranked 6th and LHC Group 8th. This is the second consecutive year LHC Group has been in Forbes’ top 10 (it made our Big Deals list last year for its aggressive expansion, which continued in 2008) and a first for PetroQuest. To qualify for the list, companies must be publicly traded, have sales between $5 million and $750 million and a stock price of $5 as of Sept. 29. The ranking is based on return on equity, sales growth and profit growth over the previous 12 months and over five years. Stock performance in relation to industry peers is also reviewed.

Road Most Traveled
As part of his second special session in March 2008, Gov. Bobby Jindal asked the Lafayette delegation if it could come together on a single road project that would help Lafayette’s traffic problems, promising to earmark funding from the $1 billion state surplus. The delegation set aside the typical politics involved in such matters and did just that, securing $20 million to widen from four to six lanes U.S. Hwy. 90 south, from Pinhook Road to Albertson Parkway in Broussard. State Sen. Mike Michot says the project must start within a year of being funded, and is on track to get under way in the first quarter of next year. “It is an investment toward the future I-49 South,” he says. “Now we’re trying to get additional money to six-lane it to Ambassador Caffery [which will intersect Hwy. 90 near the Zoo of Acadiana].”
**
The Shale Game
**The Haynesville Shale, the natural gas play expected to hold 300 trillion cubic feet of the energy source, continues to be an industry hot spot — despite softening natural gas prices. And while it’s geographically out of Acadiana’s reach (extending across seven north Louisiana parishes), landmen from here have been working the area for years, and service companies are benefiting as well. The Haynesville figures appear to trump all others, with the nearest play to it the 30 trillion cubic feet of gas gleaned in the last five years in the adjacent Barnett Shale field of east Texas. Throughout 2008, companies divested of non-shale assets to raise capital to support shale development programs.