Frank Miller’s directorial debut is all caricature and no comic book. 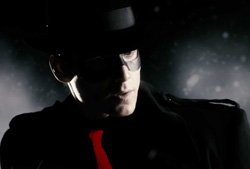 How can The Spirit (Gabriel Macht) save Central City when he's one superhero that can't even save his own movie?

If superheroes really existed, surely one of them would have stopped The Spirit. No mischief maker ever wreaked as much havoc, no criminal mastermind ever created as much despair, as this poorly made, terribly dull caricature of a comic-book movie. The film’s assets - and they could have been considerable -- find themselves in an unfair fight. Only, no one comes to their (or our) collective rescue this time.

Within 15 minutes, the film’s promising visual style reaches the outer edge of a monochromatic monotone, the tongue-in-cheek tone turns absolutely infuriating, and the story fluctuates between pretension and idiocy. The Spirit quickly comes to represent everything bad about comic-book movies and everything gone horribly wrong with computer-generated innovation. Coming in to the movie, first-time director Frank Miller, thanks to his lengthy comic-book resume, had enormous storytelling credibility. Moviegoers have Miller to thank for most of the recent era’s best comic-book cinema: Among other accomplishments, he’s the sardonic scribe who created the idea of a deeper, darker Batman and gave us the vile vivacity of Sin City. He should have stayed away from the camera, though, and remained a comic-book king who became a hot-property Hollywood sidekick. Directorial control is obviously his kryptonite.

Denny Colt (Gabriel Macht) grew up on the hard-knocks streets of Central City. Back then, he was just a decent kid desperately in love with Sand Saref (Eva Mendes), a tough chick with a soft spot for diamonds who broke his heart when she broke away from the city she had grown up to hate. After Sand fled memories of the death of her father -- and of the role of her stoop-side sweetheart’s uncle in the tragedy - Denny became the cop he had always wanted to be. But that ended sadly as well, the young officer gunned down in the line of duty. Turns out, however, that it was something that happened in the hospital on the night that Denny died that raised The Spirit.

A masked man dressed all in black save for his crimson necktie, The Spirit hears his city’s screams. Or at least he informs us that he does in the incredibly pretentious, saccharine voiceover that coats the film’s opening. His inky shadow skims along rooftops and along telephone pole wires, as two-dimensional as the melodramatic dialogue he spews about how his city gives him everything he needs. It’s hard to swallow from the start, even more so once the action doesn’t rise to the level of the language. The super-serious messiah-complex musings of the seemingly indestructible Spirit simply don’t fit with the over-the-top action and narrative that follows, both of which are campier than lakeside cabins and fireside storytelling in mid-July. The dramatic pitch constantly makes you wonder if these characters are about to burst into bad, broad Broadway song.

Like all self-respecting superheroes, The Spirit has a nemesis, a crazed powermonger who goes by the name The Octopus (Samuel L. Jackson, at his most big-eyed and yelling). Along with his henchwoman Silken Floss (Scarlett Johansson, at her most dull-eyed and pouty), The Octopus seeks an ancient vase that carries the blood of Heracles, one sanguine sip of which will render him immortal and unstoppable. His search for the relic, however, puts him at cross purposes with an all-grown-up Sand Saref, returned from the world in search of a shiny treasure that just so happens to sit in a chest that looks an awful lot like the one The Octopus is after. It’s up to The Spirit to sort all this out, stop The Octopus, find out his own origin story and woo every woman he encounters, including the faithful, forgiving Dr. Ellen Dolan (Sarah Paulson) who always patches him up and sends him back into the fray.

All of which makes much, MUCH more sense - and sounds entirely more engaging - than the manner in which Miller unfolds his film. The writer-director, adapting from Will Eisner’s comic-book series, seems to want to simultaneously be both the thing he parodies/tributes and the parody/tribute itself, and that’s a cinematic schizophrenia the newcomer cannot sustain. We can’t have a hero for whom personified death (Jaime King) pines, a hero who talks about his city with all the heat and passion of a young lover, and surround him with inexplicable Nazi uniforms and bizarre shots of dissolving kittens and huge lips. There’s a difference between frothy, pulp-fiction material and annoying weirdness. The predominantly black-white-and-red palette doesn’t help at all either; draining his film of color, playing his handful of visual notes over and over again, Miller made sure that the Spirit gave up what little ghost it might have had left.