Director Clint Eastwood turns his slow and steady eye toward the microcosm of a Michigan neighborhood in Gran Torino. 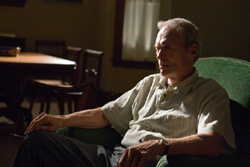 Grumpy old man Walt Kowalski (Clint Eastwood) finds himself involved against his will in Gran Torino.

When Walt Kowalski's wife Dorothy died, most of what still made him happy went with her. He sits stiffly in a pew at her funeral, looking for all the world like he'd rather be in his favorite spot on his front porch drinking Pabst, his faithful dog Daisy at his feet. His two sons sit down the row, commiserating at having to now deal directly with the old man. Walt (Clint Eastwood) watched unhappily as their children - his grandchildren - filed into the church with disrepect and in disarray, the boys making jokes, the girl sending text messages throughout the service. He listens with disgust as a baby-faced priest (Christopher Carley) offers platitudes about the bittersweetness of death. The anger radiates from him and envelops the family.

Back at home, he wanders through the house, tripping over visitors, the victim of well-intentioned home invaders. Maybe he thinks that if he keeps moving, he won't have to deal with any of them. The young priest tries to corner him, saying that he had promised Dorothy he'd look after Walt and get him to say confession. Walt lets him know - in no uncertain terms, his trademark - that confession isn't in the cards. Outside, he silently surveys a stream of people visiting the ramshackle house next door, unhappy about these foreigners come to visit the foreigners who have moved in and made his neighborhood their own. Seeking solitude in the garage, he comes across his granddaughter sneaking a cigarette. She doesn't want much to do with her glaring grandfather, but she petulantly lets him know that she sure does covet his vintage car, a gorgeous Gran Torino. The car will sit at the center of everything that unfolds.

The family that has moved in next to Walt is Hmong. The young man of the house, Thao, is shy and quiet. Hounded by his older cousin's gang, Thao (Bee Vang) undertakes the theft of the Gran Torino, a initiation of sorts into the life of the street. Foiling the young man's crime, Walt soon finds himself drawn into the Hmong family's dramas, intervening when the gang causes trouble and saving sister Sue (Ahney Her) from harassment on the street. Sue is mouthy and smart, and Walt takes a liking to her no-nonsense ways. Soon enough, he becomes an unwilling hero to the community and an unwilling employer to Thao, caught in the community he just recently had no more use for.

As Walt Kowalski - Korean War veteran, auto industry retiree, stranger in a now-strange land - Eastwood is terrifically tired. There is the tiniest hint of caricature in Eastwood's anger sometimes, mostly when he's growling (literally) at his bloated, bland and consumerist family. But the caricature comes uncoiled when there's real danger in the air, and Eastwood is as fierce as he has ever been. There's an echo of "go ahead, make my day" in his "get off my lawn," a glitter in his granite eye that we've seen and loved for years. And yet, few movie star tough guys have grown old and showcased their age, sharing their frailties as gracefully and unashamedly as Eastwood and does here. Fewer still have slyly subverted their own images, deconstructing, reconstructing and coloring in the archetypes that made them famous. Only John Wayne (The Shootist) and Paul Newman (Nobody's Fool, Empire Falls, even Cars) come to mind.

Walt is no Dirty Harry; he is a dirtied Harry, a man whose severity and hatred run the length of his spine. He is racist and casually cruel, cold, distant and violent. He is ill and alone, and all his best intentions go astray. When things in the neighborhood get out of hand, he doesn't call the police, but grabs his rifle or his handgun, thinking an eye for eye will solve the situation. His world view is narrow and perpetually disappointed. But we can't help but like him and begin to feel responsible for him against our will, the way he begins to like his neighbors and look out for them against his.

Gran Torino is another in Eastwood's studies in slow and steady direction. His style is as unflashy as his story, and his pace allows his characters to breathe, especially his own. His young actors, Hmong newcomers, are allowed to build to believability, particularly Ahney Her. The film's oddest element, then, is the racist vitriol of Walt. It is unfounded in any specific hate, turned at will on any other - and often played for laughs. Like Walt's life, it is uncomfortable and ambiguous and messy. Unlike Walt's life, we exit unsure of what it all means.