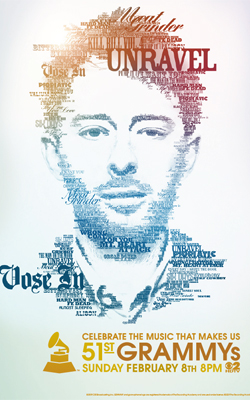 To combat the televised snore fest that is usually the annual Grammy awards ceremony, the Recording Academy is enlisting the aid of Louisiana rapper Lil’Wayne, Thom Yorke of Radiohead, Lenny Kravitz, Stevie Wonder, and Rhianna. Each of them will appear in television, print, web, and radio spots that will hopefully drum up some hype for the ceremony, which suffered poor ratings last year.

In the plugs, each artist references songs that have influenced or affected their lives in a positive manner. Predictably esoteric and ever protective of his role as an “artist,” Thom Yorke cites Scott Walker (“Psoriatic”) and Modeselektor—two acts not many people have heard of. Nice! On the other end, and equally predictable and obvious, is Lil’Wayne who trumpets Jay-Z’s “Can’t Knock the Hustle” and Young Buck’s “Pocket Full of Paper.” Whoa! How did he come up with that? Like, how deep into the American Lexicon of song did he have to reach to pull that rabbit out of the hat? You’re a rapper and you’re citing a rap song. You guys are CRAZY, MAN!!! Maybe the two of them could get together during the actual Grammy show and do one of those outdated song and dance numbers. Vaudevillian madness. That would be off the chain.

The ad campaign is said to be the biggest in the Recording Academy’s history, supposedly costing in the “multimillions,” according to Billboard magazine. It was developed by TBWA\Chiat\Day, who are responsible for the Absolut Vodka ads you see everywhere. The promotion, dubbed “music makes us,” is coming a year after the Grammys suffered their lowest ratings since 1992.  More recently, a prime-time Grammy special announcing this year’s nominations didn’t fare too well in the ratings, finishing in fourth place for its time slot.

Aside from the opportunity to root for "home team" Louisiana acts nominated in the Cajun/Zydeco Grammy category (which might not even be televised), there's not much reason to watch the Grammys...unless you enjoy hoaky skits, bad pop music, robotic banter, staged "rock & roll" moments, and seeing an industry pat itself on the back for rewarding celebrity idiocy rather than timeless music.