Food, wine and family are the guiding principles of Gene Todaro’s businesses, all named for his brother, Marcello. 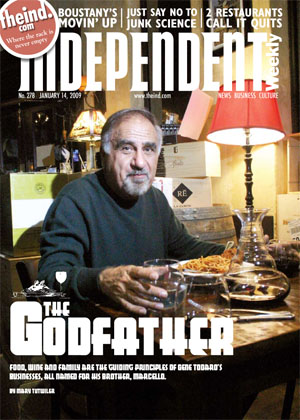 Mallory Ford likes to think of herself as a pirate. At 5 foot 3 inches, wearing a black and white do-rag over her cropped inky hair, a curled piece of horn piercing one ear and holding a 6-inch knife in her hand, Ford is somebody nobody’s going to mess with. Except maybe her bud, Brock Miller. He’s got an 8-inch Global blade. The pair (Ford’s two years his senior at 22 and has three year’s experience to his one) runs the night kitchen at Marcello’s Wine Market and Café. The Italian restaurant on Kaliste Saloom has been open a little over a year and has captured the hearts, minds and bellies of Lafayette. But it didn’t happen overnight.

The story goes back a long way, to Palermo, Sicily, when Marcello’s owner, Gene Todaro, was a little boy running errands for his mama, Rosa. “She would send me to the bread store. The salumeria, the mercato. She liked to shop every day, and I would run go buy her ingredients,” Gene recalls. Mama Rosa cooked for her five sons, Carlos, Gene, Mario, Marcello and Robert, on a daily basis. Holidays, the extended Todaro family would descend from the countryside to the city, and Rosa would cook for everyone.

In 1961, when Gene was 14 and Marcello was a year old, the family moved to New Orleans’ West Bank. Gene graduated from West Jefferson High School, then Loyola, before moving to Dallas, and his little brother Marcello left New Orleans for USL in 1980. Recalls Gene, “Marcello called me one day and said, ‘I think we can open a restaurant here.’” The brothers talked their mother into moving to Lafayette to help with recipes revolving around the spaghetti and meatballs they had grown up on.

In 1980, the Acadiana Mall had just opened, and businesses were rapidly being built down the long strip of Johnston Street. Alesi’s was firmly established on the corner of Johnston and Brentwood, and Marcello’s opened its doors in a strip south of the mall. Mama Rosa helped for several years until Marcello mastered the recipes. Gene, with his background in accounting, ran the books. Then Mama Rosa “retired.”

“She was our consultant,” says Gene. The family pitched in. Todd Barnes, Gene’s step-son, learned to cook from Mama Rosa. He and his wife, Theresa, worked at Marcello’s, with Theresa waitressing and Todd working the kitchen. Some incarnation of Marcello’s restaurant has opened and closed in several locations in Lafayette for two decades (see sidebar P. 15), the most recent opportunity knocking on Kaliste Saloom Road when owner Jack Ainsworth moved his Italian restaurant, Bella Figura, to River Ranch. Gene decided to jump back into the food business. “I had the money to do it without borrowing or asking for partners,” he says. “All I had to do is break even.”

Marcello’s (properly pronounced Mar-chello’s) Wine Market Café, which opened in November 2007, is two businesses in one. Customers walk in through rows of wine bottles, all of them for sale at retail prices. Choice tables are located in the midst of wine racks, and when the restaurant is busy, shopping for the evening’s wine is a pleasant way to wait for a table. Diners are charged a mere $10 corkage fee rather than the usual 100 percent markup, making drinking a bottle of wine while dining at Marcello’s the best bargain in town. 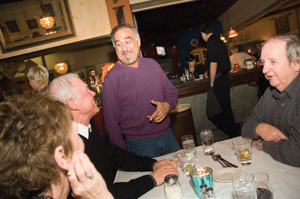 The personal touch is as important to Gene as the red sauce at Marcello’s.

The concept of a wine market located inside a restaurant is based onGene’s knowledge of how people buy wine. “My idea is to marry theconcept of wine and food, making wine more accessible to the diningpublic. Lots of people are intimidated by waiters and wine lists. Here,they can grab what they like without defending their choice,” he says.

His second bright idea was to woo Republic National Distributing Co.’s fine wine expert away from the corporate world. Nicole Jordan has been selling wine to Gene for years. She’s a pro at choosing great wines at reasonable prices; coupled with her previous restaurant experience in New Orleans, she was able to step right into the management position. “I never would have come back into the restaurant business,” she says, “if it hadn’t been Gene.”

Jordan and her daughter, Mallory Ford, arrived in Lafayette in the summer of 2005, right after Ford graduated from Grace King High School in Metairie, and two months before Katrina blew all of their friends to Lafayette for an extended stay at their house. There were 18 hungry evacuees camping at Jordan’s house, and Ford, who had never lifted a cooking spoon before, took it upon herself to feed them. She started out baking brownies from the Joy of Cooking. Then one of her mom’s friends handed her Anthony Bourdain’s Kitchen Confidential. Bourdain lays bare the dirty details of New York City’s restaurant kitchens, from the heated pace to the utterly vulgar vocabulary of a line cook. Ford lights up when she talks about reading Bourdain. “I knew that’s what I wanted to do,” she says. She started out washing dishes at Charley G’s and within two years had worked her way up through prep and salads to the sauté station, where she was firing sauces and finishing signature dishes for the upscale eatery. Then her mom hired her away.

In the family-run kitchen, Ford was an outsider. Theresa Barnes was onboard making the family Bolognese sauce, the hand rolled meatballs and the lasagna named for Mario Todaro. She also bakes cheesecakes and stirs the caramel pudding called Tutta Panna. Chef Susan Thomas, a family friend from Nino’s in Baton Rouge, was running the kitchen on a short-term basis to get the menu established. There was bad blood from the beginning between Ford and Thomas. And the food wasn’t very good.

Thomas’s pasta dishes were watery, the sauce too thin to cling to the noodles. And there wasn’t enough seasoning in any of the dishes. Jordan was unhappy. Ford rebelled. “Susan started me on salads. I had to battle my way to the stove,” Ford says. “I kept reducing her sauces, adding salt, finishing them with a little bit of butter to give them some muscle. She’d get mad at me.” Thomas wouldn’t budge on her brothy pastas, but her tenure was up after five months. That’s when Ford started to hone in on re-creating menu items that had some oomph to them.

Take the Linguini Serena, pasta topped with shrimp, calamari, crabclaws, baby clams and oysters. Nine months ago it was a watery insipidinsult. Today the dish is alive with a rich buttery saffron saucespiked with red pepper. Or the Veal Molli, veal scaloppini withartichokes, garlic and capers in lemon butter that Gene dubbed “Molli”because he couldn’t get his mouth around Mallory’s name. 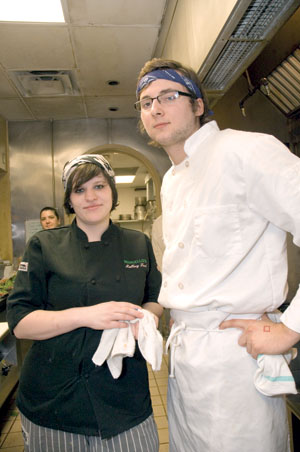 Mallory Ford and Brock Miller get ready for evening service.

Six months ago, Brock Miller walked into the kitchen. A Saint Thomas More grad, he lucked into an apprenticeship under chef David English at 7 on Fulton in New Orleans right out of high school. When English flamed out, Michael Sitchel took over the kitchen, and Miller stayed on and learned a world of inspired French technique married to the seasonal sensibility of California. He did a stint at Catahoula’s on Pinhook, quit, traveled in Europe for a month and was thinking about joining his mom, Renée Miller, in California. But he was broke and needed a job. Marcello’s needed a cook, and the “pirate crew” Ford was longing for got its first mate.

Most nights, Ford’s at the stove, creating made-to-order entrées. Miller handles the grill and expedites; you’ll see him coolly keeping the flow of service from kitchen to table. Jordan buzzes around, making sure everything and everyone is OK. But the centerpiece of the restaurant is heard as much as seen.

“How you doin’?” Gene, wearing a sweater and jeans, greets his customers, his Sicilian accent clinging to his words like a well-made sauce. “Introduce me to your wife,” he says to a man who is clearly taking his mother out to dinner. Thirty years of selling spaghetti and wine to the town of Lafayette has brought him in contact with the entire populace. Most everybody, after one visit, is on a first-name basis. Gene is openhanded with his customers, treating friends to a glass of wine, and on occasion an entire table — chosen at random — to a surprise meal on the house.

With black and white family photos on the walls, Persian carpets on the floor, over-the-top baroque chandeliers lighting the dining room and Louis Prima singing low, the restaurant feels like your Italian grandmother’s living room. The bar has become a nightly, cognoscenti, cocktail party, and deals are cut at the intimate tables, especially Gene’s private table tucked behind a stack of wine, where there is no one within eavesdropping range.

None of this would be happening if the food wasn’t so good. But it’s the basics, the keen business sense, the attention to customers, and the homey feel that make this restaurant great. And the red sauce. “Meatballs and spaghetti,” says Gene, “it’s my bread and butter, I eat it two, three times a week.” Thank you Mama Rosa.

All in the Family

In 1984, the Todaro family moved its restaurant from south of the mall to Time Plaza, where it turned out classic Italian red sauce dishes until 1988. Marcello Todaro left for Memphis and eventually California, where he lives today. In 1993, Gene began plans for a third Marcello’s in the Johnston Street building where Ninfa’s Mexican restaurant is currently located. But family tragedy led to the restaurant’s closure within a year. Gene’s partner was his brother Mario, who died of a heart attack a month after brother Robert, who was to be the restaurant’s cook, was killed in an accident. It would be three years before the family was ready to launch another restaurant, back in the location past the mall. This time, red sauce gave way to classic French bistro fare under the hands of Cliff Saga, Simone Cormier and another emigrant, Philippe Simon, from Burgundy. Café de France, a bright star on Lafayette’s restaurant scene, burned out in 1999.

Meanwhile, Gene had opened a wine shop, also dubbed Marcello’s, in 1985 in La Promenade Mall. The wine shop moved to its current location near South College Road in 1994. Carlos works with Gene in the wine store, which has always been the backbone of Gene’s business. There’s also a wine shop in Baton Rouge that Gene owned with his cousin but has handed over to his son, Gene Jr., along with his cousin’s son, to give the next generation a foothold in the family business. And a new restaurant, Enoteca (Italian for “wine bar”) Marcello’s, will open not far from the wine shop in Baton Rouge next month, employing Gene’s grandson, Nick Barnes. “We do things together, separate, with cousins, nephews, whatever. My cousin and I, we’re in our 60s now; it’s time for the kids to have their own things going on,” says Gene. As for 86-year-old Mama Rosa, she is fragile, but her mind is still sharp as a tack.