Rep. Charles Boustany talks about taking a seat on the influential House Ways and Means Committee. 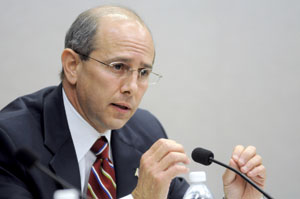 John Breaux, Jim McCrery, Richard Baker, Billy Tauzin, Chris John. Louisiana could feel its political influence on Capitol Hill shrinking as each one bid farewell to Congress. Each of those veteran lawmakers built up invaluable seniority, contacts and key committee posts that ensured Louisiana’s interests would always be considered. But their departure has also helped create opportunity for Louisiana’s new class in Congress, evidenced last week when Acadiana’s own Charles Boustany was awarded a seat on the Ways and Means Committee, taking over a spot previously held by McCrery. One of the most influential and sought after committee assignments, the tax-writing board plays a significant role in virtually any major initiative Congress takes up and has jurisdiction over all major entitlement programs including Social Security, Medicaid and Medicare. We talked with Boustany last Thursday by phone about his new committee assignment and his rising profile within both Congress and the Louisiana delegation.

With Ways and Means the most influential House committee, there was some intense jockeying going on for the six Republican vacancies on this committee. How did you work to get assigned to this committee, and why do you believe you were one of those selected?

Well I’ve been working on this for the past three years to position myself as a leader in Congress on the issues dealing with taxes and trade and health care, Medicare, Medicaid. So I’ve worked to build a level of knowledge on all those issues. I’ve gone down to the floor of the House to speak on these issues repeatedly, and then we’ve also worked with [the Republican Party] leadership. Last year, leadership, particularly [Minority Party leader] John Boehner, asked me to head up a task force on health care reform to come up with some principles, which I did, and they were very happy with the way I conducted the meetings and with the end product.

I think it’s really been an accumulation of all the things that we’ve done over the past three years to position ourselves for this valued position on the Ways and Means Committee. And it’s going to be a really important committee for Louisiana because the committee deals with international trade which is critical to the Louisiana economy when you look at our agricultural trade as well as other aspects of international trade. Tax policy is extremely important for economic growth, and of course, my expertise in health care is going to be extremely valuable as we work to craft a solution to the health care problems the country’s facing.

You received a recommendation for this committee assignment from Jim McCrery, the retiring congressman from Shreveport, who was the top Republican on the Ways and Means Committee. What kind of role did he play in this?

Jim McCrery did an outstanding job for Louisiana over the course of his career in Congress and had moved all the way to the top Republican position on the committee. We’re certainly going to miss his leadership, but he has been a mentor since I announced my first campaign for Congress. I introduced myself [to him] when I made a decision to run for Congress, and he started providing me advice, and his advice has been just perfect and right on spot since I started. When he made a decision to retire from Congress, he really made a push to help me secure a position on the Ways and Means Committee by showing me the ropes on how to position myself, what kind of political steps we need to take, and of course he made recommendations to leadership, which complemented the efforts I was putting forth.

Are you looking to carry on any of his work on this committee?

Yes. He was beginning to establish himself as a leader on health care policy, and I will pick up that banner and run with it. He was also one of the experts and leaders on the committee dealing with energy taxes and any tax issue pertaining to the energy industry, and specifically the oil and gas industry. As you can imagine, that’s a contentious issue here in Washington, and there’s going to be a lot of debate as we go forward. I intend to be a leader on those issues, and, in fact, over the past year in particular I’ve been studying a lot of that and having experts come in and brief me on those issues.

With McCrery and also Richard Baker from Baton Rouge both retiring from Congress last year, a lot has been written about the Louisiana delegation’s loss of seniority and influence. Do you think the state lost much influence and if so, how does the delegation go about re-establishing that?

I think what we’ve lost in years of experience, we will work hard to make up for with hard work and also coordinating our efforts. I’m very eager to assume a leadership position now in our delegation. Moving on to the Ways and Means Committee positions me now to be not only a leader for Louisiana, but to be a leader in the Congress because this is the most powerful and eminent committee in the Congress. It’s a great opportunity for me to really call forth my leadership skills to work on behalf of the country, our state and my congressional district.

You mentioned health care being one of the issues you’re anxious to become more involved with. Do you have any concerns about some of the changes President-elect Obama has proposed for health care policy?

I’m just starting to look at some of the things that have been coming out. I’m in the midst of reading [President-elect Obama’s nominee for Secretary of Health and Human Services] Tom Daschle’s book on health care, and I have some concerns about the approach that they’re taking, because they’re looking at it from a 30,000-foot view without having been in a clinical setting where you deal with patients. I’m afraid some of the things they’re talking about now really don’t put sufficient emphasis on the doctor-patient relationship and how important that is to quality medicine and to bringing down the cost of high-quality medicine. You know, if you don’t have a really defined doctor-patient relationship, then not enough emphasis is placed on prevention and early detection and screening, and that’s the problem we see predominately with Medicare, Medicaid and the children’s health programs that are all government-run. So those are the kind of quality things that I want to make sure we don’t lose sight of.

And how about the Jindal administration’s proposal for revamping our health care system here in Louisiana? Do you see the state possibly being a model for health care reform?

I think we have a great opportunity to show other states how to proceed forward on health care. The Jindal administration’s proposal is on the right track, but it’s still short on details, and I’ll have to see more detail put forth as to how it’s going to work. But having spoken on a couple of occasions with [state Department of Health and Hospitals] Secretary [Alan] Levine, I have a lot of confidence in his ability to put together a good plan, and I look forward to working more with him.

The first thing the new Congress is expected to take up is the economic stimulus package that’s now being outlined by the incoming Obama administration. What are you thoughts on the proposal so far?

The stimulus package proposal is still evolving, and I’m guardedly optimistic that we’re going to get on the right track. I was pleased to see President-elect Obama put the emphasis on tax cuts that he’s now starting to put forth because I think that’s going to be critical to helping businesses and families get back on their feet. I want to make sure that we keep the tax burden low on small businesses and that tax policy is going to promote manufacturing. I believe the Ways and Means Committee will start working on this over the next few weeks, and this is going to be an area of great interest for me, for everybody in the country. The most important thing is to get this right. We have to be careful not to embark on frivolous, extensive government spending that is really going to run up a record deficit. We need to make sure that whatever’s done is truly going to stimulate the economy and pull us out of this deep recession.