An interactive show introduces painter Marc Chagall to the children of Acadiana. 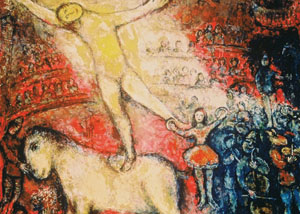 Painter Marc Chagall spent most of his adult life in Paris, but he never forgot the village of Vitesbk, in Russia where he was born, in 1887. He painted a colorful vision of a rural fantasy, a place where goats fly, roosters draw a magic sleigh over the rooftops of Paris, colossal green-faced fiddlers play music, and love alone floats a husband through the air to gently kiss his bride. While cubism ruled the mid-20th century art world of Europe, Chagall went his own way, creating a visual language of love and humanity governed by his Jewish upbringing and faith that resonates as much today as it did to a world tearing itself asunder.

The Children’s Museum of Acadiana brings the world of Marc Chagall to Lafayette in an interactive show designed to involve children in the creative process. Chagall for Children features 14 reproductions of some of Chagall’s most famous works and creates a hands-on activity for each one that expands on its style, form, color, or whimsy. Don a cape, step in front of “At the Circus” and watch yourself become part of the painting. Touch screens invite young artists to remake “The Flying Sleigh” or animate “The Juggler.” The different instruments in “The Concert” play tunes, “Flowers” emits scents, and you can take a digital photo of your face and turn it from blue to purple or green like “The Green Violinist.”

Chagall for Children represents a giant leap for the children’s museum. “We’ve never rented an exhibit of this caliber before,” says CMA Director Marvita Hudson. The $30,000 rental fee called for a stepped-up program of fund-raising, a perpetual concern for the privately funded nonprofit. “But this is important,” says Hudson. “We are bringing a world-class exhibit to the children of Acadiana. They’ll be exposed to works by an artist some of them would not otherwise see.”

_Chagall for Children opens Jan. 17 and will run through May 2 at the Children’s Museum of Acadiana, 201 E. Congress, downtown Lafayette. Hours are Tuesday through Saturday, 10 a.m.- 5 p.m. Individual admission is $8; admission for children on field trips is $7; adult chaperones are $5.00. For more information call 232-8500 or go to www.childrensmuseumofacadiana.com