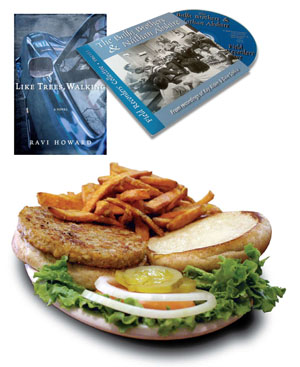 LIKE TREES, WALKING
The winner of the 2008 Gaines book award, Like Trees, Walking examines death, faith, truth and justice after the 1981 lynching in Mobile, Ala., of Michael Donald, who was killed and hung from a tree by two Klansmen. The book explores the promises of America’s New South, the effect on Mobile of a grisly murder and the journeys of brothers Roy and Paul Deacon as they search for solace. Author Ravi Howard won the book award honoring Louisiana’s Ernest J. Gaines, UL Lafayette’s writer-in-residence emeritus. A panel of five judges chose his book over 21 others for the annual award, which was created by the Baton Rouge Area Foundation and is in its second year. The 34-year-old novelist will be presented the $10,000 award at a Jan. 29 ceremony at the Manship Theatre at the Shaw Center for the Arts in Baton Rouge. Doors open at 6 p.m., and the program begins at 7 p.m. The celebration is open to the public. Reserve your spot among the limited seats by e-mailing [email protected] or calling (225) 387-6126. Like Trees, Walking is available for $13.95 at local bookstores. — Leslie Turk

EDGY VEGI
Hell has apparently frozen over. We know this because the first sign of the Apocalypse has occurred; the smothered pork chop hub of the universe, Antlers, is serving a veggie burger. “We offer them in January,” says owner Johnny Walters, “because everyone’s got their New Year’s resolution to eat healthy. By February that tapers off.” The burger, $7.95, is made of wheat, brown rice, barley and mushrooms, served on a whole wheat bun. It comes with that healthy alternative to french fries, sweet potato fries. Antlers also offers whole wheat pasta and brown rice, so you can go for their chicken fricassee afloat in deep brown gravy with all good intentions in place. Call Antlers for more info at 234-8877. — Mary Tutwiler

CLASSIC LIVE CUTS
Field recordings are sometimes a mixed blessing. While it’s always great to hear historic recordings, sometimes you’re left wishing the sound quality was better. But Ray Alden and Dave Spilkia of the Field Recorders’ Collective have produced another recording of Dewey Balfa with the Balfa Brothers and Nathan Abshire performing classic Cajun tunes recorded live that sounds great. The Balfa Brothers & Nathan Abshire was recorded in New York in the early ‘70s and features landmark tunes from the Balfas and Abshire.  (Be sure to also check out Dewey Balfa with Friends & Family from FRC.) The Balfa Brothers & Nathan Abshire retails for $15 and can be ordered online at www.fieldrecorder.com — R. Reese Fuller