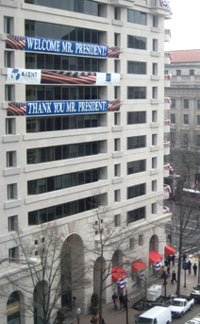 It took us 16.5 hours, but we finally rolled into D.C. Saturday night after having left New Orleans right at 4 a.m. I’m traveling with a New Orleans group consisting of my younger brother, cousin and a friend of my brother’s who lived about eight years in D.C. We were all invited to stay with my older brother who lives right around Logan Circle not far from Capitol Hill. So far, we’ve walked everywhere and managed to get around the city with relative ease, although there is this prevalent paranoia that the city will soon be going into lockdown mode as some 2 million people are expected to descend on the nation’s capital for tomorrow’s Presidential Inauguration. I’ll be blogging on my experience here; I also know there are several other Lafayette and Louisiana folks in D.C. and welcome them to post their observations along with anyone else who wants to comment. I’ve already taken a number of interesting pictures since I’ve been here and will be posting several of them along with notes throughout the next few days.

Today seems somewhat calm in the city after yesterday’s huge crowd. Right now I’m sitting on the 7th floor of an office building on the 1300 block of Pennsylvania Avenue, across from the International Trade Center and between the Warner Theater and the National Theater. Occasional snow flurries are blowing around outside. Tour buses regularly roll by on the street. The office building catty-corner to where we are has two big banners hanging outside that read, “Welcome Mr. President!” and “Thank you Mr. President!” – a nice gesture to both the outgoing and incoming president.

Right now, everybody is in prep mode. Tomorrow the big parade will pass by right outside, and the elevator of this building is jammed with people trying to bring in supplies for all the inauguration office parties. There are lines running outside some of the nearby convenience stores. I just heard horns and a crowd of people yelling and looked out the window to see a group of people atop a float-like bus passing by. I keep expecting to see beads flying around. My cousin Jac has already dubbed this Obama Gras.