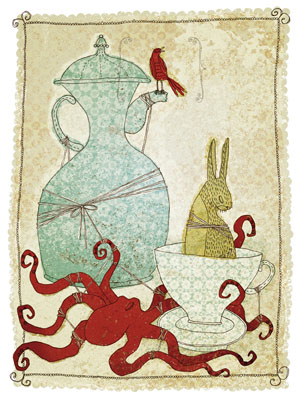 There’s nothing like a deadline to get you in gear. That’s the pressure Denise Gallagher needed to focus her creative impulse into mature works of art. For 10 years she has been the award-winning senior art director for BBR Creative and does many of the illustrations for the advertising firm, but she says that as late as a year ago, she had worked within other artists’ styles. “I was feeling untrue to myself. I hadn’t found my own voice or graphic vocabulary,” she says. She had just turned 39, and she felt the clock ticking. That’s when she happened on a Web site for artists, IllustrationFriday.com. The Web site posts a word a week, such as “contained,” or “resolve” and challenges the participating artists to submit an illustration of the theme each Friday. No pressure, no clients, no judging, just a forum for illustrators to experiment in a community of their peers.

Gallagher resolved to meet that weekly deadline, and neither hurricanes, the demands of her children or the illness of her mother stopped her from taking the time each week to do a drawing of her own. She started off with black and white pencil sketches, which she scanned in. But as her imagination took fire, she yearned for color, and her medium expanded into digital illustration using Adobe Photoshop to add layers of color and texture to her pencil drawings. Week by disciplined week, she became more and more confident of her creative powers.

Through a friend, she was introduced to a book project. Designer Von Glitschka was working on a book of illustrated patterns, called Drip. Dot. Swirl. Glitschka was looking for 10 illustrators to show how his patterns could be used in art and design, and once he saw Gallagher’s work, he asked her to contribute to his book. “The pattern chosen for me, ‘Double Dutch,’ reminded me of fragile, tinkling teacups, lace doilies and tiny cakes arranged just so,” Gallagher says. But the tea party she created is not exactly your aunt’s idea of polite company.

Gallagher’s mind has dark corners lit by whimsy, reminiscent of the Gothic camp of author and illustrator Edward Gorey. Invited to her tea party is a bird, a rabbit and an octopus, but they don’t look like they are enjoying the afternoon. The octopus is roped to the teapot, and the rabbit is bound inside the cup. The scene isn’t exactly threatening, but it certainly is intriguingly odd — a story begging to be written.

“Double Dutch” is just the beginning. Gallagher illustrated the word “kindness” by stitching a much mended wing to the back of a fox. “Loyalty” is a huge hamster, fiercely occupying a high heeled, quite alive, snake skin shoe. “Song” is composed of three tin cans inhabited by musical snakes, birds and hares, each one knotted to a bare branch like a whole note dangling from a music staff. Curiouser and curiouser, as Lewis Carroll’s Alice would say.

Gallagher submitted “Double Dutch” to a competition created by the Society of Illustrators, an illustrious, century-old organization that for 51 years has been recognizing the year’s 300 top international illustrators annually with an exhibition of their work, an awards gala and opening, and a full-color edition of the collected work. She was stunned when she heard she had been chosen. “These are illustrators I’ve admired my whole life,” she says. Finding herself in the company of Where the Wild Things Are author Maurice Sendak, and Gorey, is quite an honor.

The partners at BBR Creative are equally delighted. They have always encouraged Gallagher to follow her artistic inclinations. Says Creative Director Cathy Pavy, “We want our employees to pursue their personal goals while they pursue professional growth. We believe the two go hand-in-hand and are happy to support Denise in her illustrations.”

Gallagher isn’t resting on her laurels. She plans to enter some of her work in the upcoming juried Southern Open show at the Acadiana Center for the Arts. She’s thinking about plot lines for children’s books. And she’s still dedicated to her exercise of illustrating a word a week. Perhaps the next one should be “success.”

Gallagher will accept her award on Feb. 6 in New York City. She won’t turn 40 until March 1. To see more of her illustrations, go to her Web site www.DeniseGallagher.com.