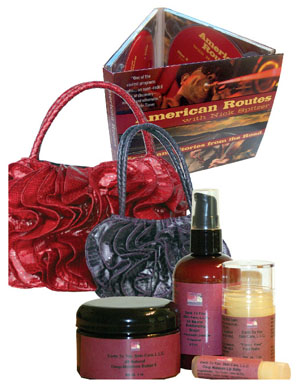 CATCH THE WAVE
Love ruffles, but just can’t wear ‘em? The Snakeskin Wave Satch might be just the frilly accessory you need. Big and red or tiny and purple, these are eye-catching purses that can transition from daytime jeans to a little black dress for an evening fling. At $66 for the larger version and $44 for the smaller one, you can afford to double up. Both are can be found at Little Town, in the Oil Center Gardens shopping center on Coolidge Boulevard. Call 268-9499 for more info. — Mary Tutwiler

BUTTER HER UP
Nobody knows the itch you feel better than someone who suffers from it herself. That’s how Simone Pitre felt. Her dry, eczema-prone skin was so sensitive to commercial skin care products that she decided to develop some for herself, based on her knowledge of natural ingredients like soy, olive, aloe, cocoa and shea butters, evening primrose oil and skin-healing vitamin E. It doesn’t hurt that she’s a nurse practitioner familiar with allergies. “I see a lot of dry skin conditions that would benefit from super emollient butters,” she says. Most commercial skin products contain a lot of water and preservatives. “You’re not getting the good stuff,” says Pitre. She made batch after batch for months to develop her product line, Earth To You Skin Care. “My skin was silky smooth at the end of the study,” she says. Her Deep Moisture Body Butter or Moisturizing Serum fragranced with patchouli and lavender oils are $19 for four ounces, a pepperminty Fonky Foot Balm is $8, and soothing Lip Balm goes for $6. All Earth To You products can be found at Pascal Spa in the Oil Center, 232-6449, or e-mail Pitre at [email protected] — Mary Tutwiler