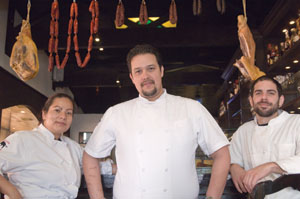 It’s a really good sign when you walk into a restaurant and cured hams are hanging from the ceiling. That’s one of the innovations at Pamplona, Lafayette’s downtown tapas destination. The other big change is that founding chef and partner William Annesley has left not only Pamplona’s kitchen, but Lafayette as well. He does remain a partner in the business. Annesley famously juggles projects. He’s done everything from pub cooking in his native England to building movie sets in Los Angeles, producing films, hosting underground dinner parties, opening clubs and marrying Quentin Tarantino’s assistant. Karina Carrero grew up in Lafayette and introduced Annesley to Cajun country. Five years ago the couple moved to Lafayette to create Pamplona.

It took four years to get the tapas restaurant off the ground. With its white stucco walls and dark wood bar, bullfights on the video screens and echoes of Ernest Hemingway’s love affair with Spain everywhere, Pamplona was an instant sensation. It also garnered the reputation of being too pricey for everyday dining. Annesley was importing delicacies from around the globe to create his fusion tapas that melded everything from southeast Asian coconut curry broth for his mussels to foie gras from New York’s Hudson River valley. The broad swath of the menu created conceptional tension between traditional tapas, which is Spanish bar food, and the high end dishes Annesley was offering.

In early January, Annesley announced his departure for Los Angeles. Both Karina’s career in fashion and marketing and Annesley’s casting in several television cooking series demanded a relocation to the West Coast, long range plans they say were in the works even as the restaurant was being created. What would that mean for Pamplona? Changes. The main one being that the restaurant’s former chef de cuisine, Orlando Amaro, could finally step into the limelight. 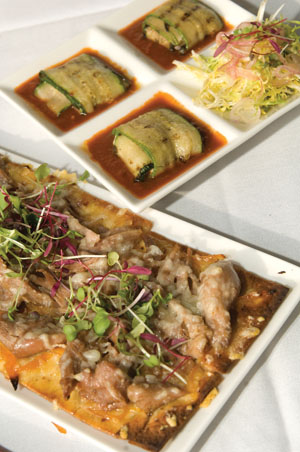 At 34, the native Venezuelan has the youthful glow of an ingenue, but don’t let his baby face fool you. He grew up under the tutelage of his mother, Helen Farias, a pastry chef, and was fascinated by food preparation as a boy. At 20, he enrolled in the Culinary Institute of Mexico in Puebla before going on to stints as executive chef at Hilton hotels in Barquisimeto, Venezuela, and Miami, Fla. The critical moment in his gastronomical education, however, came when he entered the kitchens of Juan Mari Arzak, in San Sebastian, Spain. Restaurant Arzak blends traditional Basque dishes with the laboratory techniques made famous by Ferran Adria at his Catalan destination restaurant, El Bulli. Arzak has been repeatedly named one of the top restaurants in Europe, and Amaro learned a world of taste and technique there. Amaro was back in the states, as executive chef of the Blu Moon, in Miami, when Annesley, who was looking for some one with European training to take on the kitchens of Pamplona, contacted him.

“I saw the idea of a tapas restaurant in the small town of Lafayette, and I thought it was a great idea,” says Amaro. Not only have he and his wife settled in, with one child in school and another on the way, but his father, also named Orlando, works for Pamplona as the familiar doorman under the big red umbrella at the Jefferson St. curb. Amaro has been at the stove since the restaurant opened, but Annesley has now passed on the creative reins. Last week, Pamplona came out with a new menu offering more traditional tapas at more traditional bar food prices.

On display on the bar, as they would be in Spain, are nibbles such as spicy garbanzo beans, citrus olives, Spanish cheeses and cured meats, including a sensational duck prosciutto.

The small tapas plates are designed for three people. Don’t miss the feta cheese al horno, which is an innovative ravioli, where thin strips of grilled zucchini replace more traditional pasta, filled with warm creamy goat cheese and crunchy macadamia nuts. Other favorite bites are the pintxos morunos, skewered grilled lamb with tapenade; bacon-wrapped dates; and patatas bravas, spicy small fried potato balls with a smoked paprika aioli. Tapas prices run from $3 a plate up to $10, considerably less than the old menu. Salads are brighter and lighter. The fabulous duck fat fries are still on the menu, and there are a couple of knock-your-socks-off entree size dishes like Amaro’s play on duck three ways, sliced grilled breast, foie gras and a confit and potato galette, or the Aspen Valley lamb chops with a truffle potato cake. The wine list encompasses the best of Spain — good deals on great earthy wines. And the service is still silky smooth.

Major changes in restaurants often cause tremors in smallish towns like Lafayette, and Annesley’s departure quickly ground through the rumor mill. Managing partner Jerry Young says that’s par for the course but was quick to note that there is no disruption in the force. “Pamplona is here to stay,” he says.