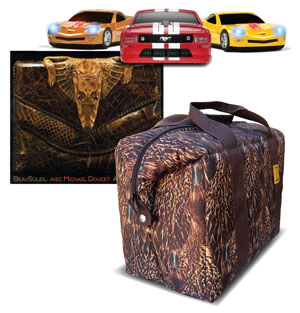 GENUINE CAJUN BREAKDOWN
BeauSoleil’s latest album kicks off with an announcer echoing the early recordings of Dennis McGee: “Folks, this is genuine Cajun breakdown music as heard in Evangeline country. Let’s go boys!” The Grammy Award-winning band breaks into McGee’s “Reel Cajun.” Alligator Purse is the first record for BeauSoleil avec Michael Doucet on Yep Roc Records. There’s your traditional Cajun and Creole numbers, served up à la BeauSoleil, like “Carrière Zydeco” and “Bosco Stomp.” But there’s also your not-so-traditional tunes, like a French version of Bob Dylan’s cover of Muddy Water’s “Rollin’ & Tumblin’,” a French version of Bobby Charles’ “I Spent All My Money Loving You,” and J.J. Cale’s “The Problem.” For more information on Alligator Purse, visit www.yeproc.com. — R. Reese Fuller
**
CAMO COOLER**
White Styrofoam ice chests are a thing of the past. Not only are they flimsy, one-time-use coolers, but they last for eons in landfills, if they make it that far. Mostly the foam breaks up while in use, leaving a trail of petroleum pearls in the wilderness. Enter Brian Frederick’s Feather Flage cooler bag. Frederick’s trademark pattern of duck feathers provides camouflage for hunters or wild things chic for the rest of us. Lined with cushy waterproof insulation that will protect chilled bottles of champagne and a decadent lunch of St. Andre and slices of melon, or a 24-pack of Abita and a stack of bologna sandwiches, the bag, with a comfortable carry handle is lightweight, and small enough to make it as an airplane carry-on for those hauling a boudin fix to far-flung family. Available for $55 at Frederick Hair Studio on Jefferson St., 234-4054, or online at www.featherflage.com. — Mary Tutwiler

MUSCLE CAR MOUSE
This one’s for the nerds. It’s a muscle car computer mouse. And it works just like a regular mouse. Plugs into your computer, clicks, scrolls — the whole deal. It’s like a palm-size IROC-Z for the computer code crowd. It almost makes you want to shop around for a palm-sized wife-beater muscle shirt to slip over you hand to keep the party going. Check them out at Doghouse Computers at 4416 Johnston St. or call 289-9153. — Dege Legg