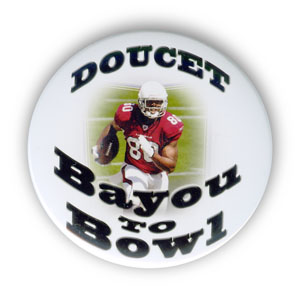 The town of St. Martinville will be painted red this Sunday in support of the Arizona Cardinal’s first ever franchise Super Bowl appearance. More importantly for most locals, it also marks rookie wide receiver and former LSU and St. Martinville High standout Early Doucet’s first trip to the Bowl. In honor of the game, Early’s older sister, Carla Doucet-JeanBatiste, who helped raise Early from the age of 14 is now selling selling yard signs, t-shirts and buttons promoting her brother’s trip to football’s biggest game. The proceeds will go to the nonprofit Early Doucet 980 (representing Doucet’s jersey numbers with LSU and Arizona) that will organize and fund an Early Doucet fan day community event in St. Martinville following the Super Bowl.

JeanBatiste says this season is another milestone for Doucet and one which came with some struggles. A natural talent, Doucet started as a freshman and played all four years at both LSU and St. Martinville High. Joining what is widely recognized as the best receiving corps in the NFL, Doucet hasn’t been able to jump right into the starting lineup with the Cardinals. He has worked his way into the rotation, however, and is expected to log some playing time this Sunday. “[This season] has been about being  patient and persistent,” JeanBatiste says. “But I’ve always had faith and believed in him. We’re so proud.”

If you want to show your support, you can purchase the “Early Doucet, From the Bayou to the Bowl” gear at City Hall, Floyd’s Corner Store, or Nola’s Tax Service in St. Martinville, or call JeanBatiste directly at 344-8513.