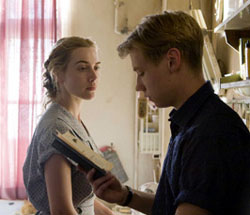 The ill-fated affair of Hannah Schmitz (Kate Winslet) and Michael Berg (David Kross) sits at the center of The Reader.

It would be so easy to misread The Reader. Already it's been dismissed by many critics as nothing more than a film in search of an award, the flimsy story of a 15-year-old German boy and his older lover that wraps itself in a crass and self-aggrandizing invocation of Holocaust horrors.

But to misjudge the film so severely is to read with the straining eyes of the newly literate, seeking only the familiar, trapped diligently in form, not yet comprehending content. The Reader has every right to be considered a most honorable entrant in the Holocaust genre, even if its focus lies beyond the terrible times chronicled in Oscar-winning epics such as Schindler's List and The Pianist. What Stephen Daldry's fantastic film wants to do is talk about what happened after the camps, not what happened in them. The Reader's troubled soul is less concerned with why and more concerned with what comes next. And such an orientation is a brave step away from the comfortably uncomfortable narrative we know into a moral maelstrom of guilt, complicity and conflict. The Reader, scripted by David Hare from Bernard Schlink's book, is about the horror after the horrors.

But not at first. At first, it's the story of Michael Berg, an open-faced German teenager who becomes an enigmatic older man. We see Michael the older first (Ralph Fiennes), an unfailingly polite but cool lover softly stepping away from the nameless woman who shared his bed last night. He precisely pours her coffee in the immaculate kitchen of his austere apartment, and we know that he is a melancholy and disconnected man. In the first of the film's deliberate time shifts, Michael the older soon melts into Michael the younger (David Kross), and we follow him into the dark heart of The Reader.

One snowy, gray day, Michael falls ill on a city tram on his way home from school. Exhausted and sick, he sits for a moment in the shadowy entryway of an aging building, and there encounters the gruff but kind Hannah (Kate Winslet), who wipes his face and washes the sidewalk with equal concern. After a bout with scarlet fever, he returns to Hannah, and the two begin trysting in stolen moments. She teaches him to slow down, and he reads to her from his homework assignments in languages and literature. His time with Hannah, tempestuous as it is on occasion, takes him away from his dour, sour family, makes him feel like the star of his own life, but it only lasts a summer. She disappears, taking her many secrets away. The film could end there and be lovely but forgotten. Instead, we follow Michael to law school, where he and his seminar classmates field-trip to witness the trial of six accused Nazi war criminals -- and one of them is Hannah. It is an abrupt and stunning shift, and only one of the film's many wrenching excellences.

As Hannah, Winslet transforms her own sunny, flighty charm into an angry, weary opacity. We never really know her, and that is the movie's truest marvel. As she shows us sides of herself, we are Michael, left wondering. Her motivation, her mind, her heart, these are things we will never be able to understand. All we know are small glimpses of who she might be -- and what she did. Like Michael, played with youthful angst and abandon by Kross and refined repression by Fiennes, we never understand why, even though we ask.

This absence of answers is not a flaw in the film; it is its strongest point. As with The Hours, Daldry and Hare make muscular, intelligent art together. The film's carefully crafted structure informs its content at every turn. In Hare's meticulously layered script, so gracefully shot by the understated Daldry, past and present intertwine. Michael is always Hannah's inexperienced lover; Michael is always also her thunderstruck judge.

He will never know why Hannah did much of what she has done, can never know because of time and circumstance. He simply must acknowledge her actions and let them in, these abominable, incomprehensible apriorities. This is not the same as approval or resolution or peace. It is, rather, a realization of the things that have marked him, scarred him and created him, as he fumbles his way forward. With every haunting, haunted step, he becomes a masterful metaphor for a fallible, evolving culture coming to grips with its darkest past -- not successfully and finally, but haltingly and with great sorrow.