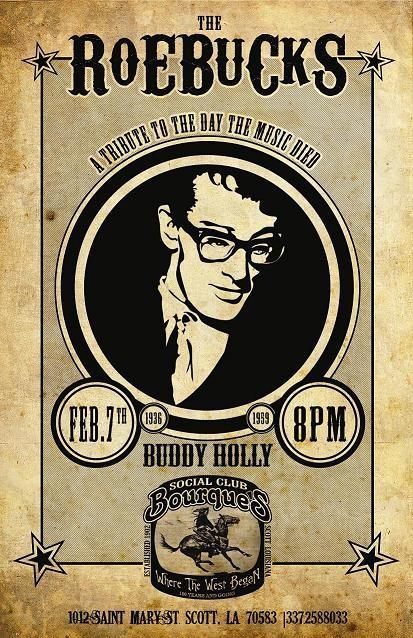 Lifelong fan of Buddy Holly and Louisiana rockabilly veteran, Robbie Taylor of the Roebucks, once escorted Buddy Holly’s wife, Maria Elena, to a Texas Music Hall of Fame induction ceremony way back in 1985. He was stoked to be so close to the source. Since ’91, Taylor has been rocking the clubs of Lafayette in his band The Roebucks, putting out vintage rockabilly twang mixed with backwoods roots and roll. Ain’t a damn thing changed since he first started. And why should it when it’s this good? The Roebucks host a night in honor of Buddy Holly at Bourque’s Social Club in Scott where they will play over 30 songs that Buddy either wrote or popularized between 1956-59. Be there for a spirited evening to witness The Roebucks on Saturday, Feb. 7 at 8pm at Bourque’s in Scott, Louisiana.

Playing Favorites with Robbie Taylor of The Roebucks:
1.    Favorite guilty pleasure record from the 1980’s? Tainted Love by Soft Cell
2.    Worst gig ever played? VFW Hall in Judice for a Singles Dating Party. We couldn’t bring our own beer in, so drank out back.
3.    If you crossed Buddy Holly with Danzig who or what would you get? A Wholly Bugger. (correct answer: Yukio Mishima)
4.    Quickest way to seriously offend Robbie Taylor? If you don’t trust me, I’m going to have to lie to you.
5.    Young, Old, or 30-something Elvis? Come back Elvis. By that time he’d realized the career mistakes he’d made, but he was still badass.
6.    What brand of cigarettes is hardest on your vocal chords? Picayune Cigarettes.
7.    If you were an old car what year make and model would you be? 1969 Chevelle SS 396.