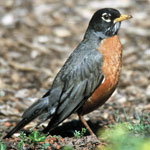 The National Audubon Society is reporting a northward shift of wintering birds, and pointing at global warming as the cause.

Nearly 60% of the 305 species found in North America in winter are on the move, shifting their ranges northward by an average of 35 miles. Audubon scientists analyzed 40 years of citizen-science Christmas Bird Count data — and their findings provide new and powerful evidence that global warming is having a serious impact on natural systems. Northward movement was detected among species of every type, including more than 70 percent of highly adaptable forest and feeder birds.
Local birder and former head of the Acadiana Nature Station, Bill Fontenot, says he’s noted the phenomenon over the past 30 years, as he’s participated in the Christmas Bird Count in Lafayette.  We’ve noticed the most obvious is red wing blackbirds, which used to winter here in the I-10 corridor in massive numbers, tens of millions. To a lesser degree, we’ve notice that with waterfowl. At least some of us are suspecting that is true with woodland songbirds like robins, hermit thrush and even brown thrashers. There used to be an abundance of robins that you couldn’t ignore, they were everywhere. This winter, you have to look for robins if you want to see robins.

Tri colored heron and little blue heron — those birds that used to be really hard to see [in winter] — now you expect to see them in the I-10 corridor. Hummingbirds are birds that normally migrated to Mexico. But winter hummingbirds, by the 1980’s, it really got hot, pardon the pun. Everybody starting seeing western hummingbirds here, and started leaving feeders out, and everybody started getting them, and it snowballed, pardon the pun. It was a big phenonomnon, and still is. People weren’t really sure what was going on, and like Bob Dylan said, ‘something’s happening here, and you don’t know what it is...’
Does Fontenot concur with what's happening is global warming? “I wouldn’t disagree,” he says.