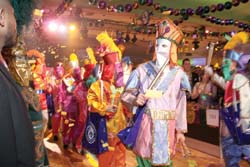 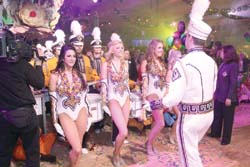 Revelers from the Krewe of Mystic Louisianians 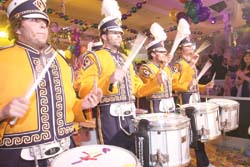 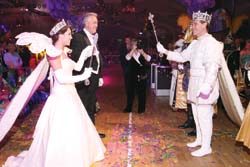 King Roy Martin III and his daughter Laura Kathryn are the first father-daughter royalty in the history of DCMG. 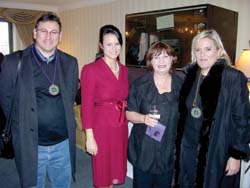 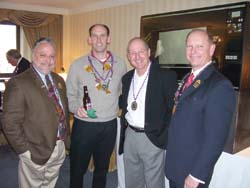 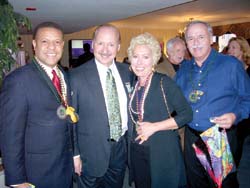 Party Girl should certainly know better than to underestimate the potential for any king of DCMG (that’s Party Girl parlance for the annual Washington, D.C., Mardi Gras celebration) to host an incredible tableau and ball. Foolishly, I wasn’t expecting much this year, having heard that the king was from Central Louisiana. Well, sincere apologies to the Krewe of Mystic Louisianians and to King Roy Martin III of Alexandria in particular for expressing low expectations for this, the 61st ball in our nation’s capital. Please don’t take me off the ‘A’ List!

As he suite-hopped on the day of the ball, perhaps The King’s attire was a clue to the party plans he had made. He was decked out in a purple blazer and yellow sports shirt, which could, of course, have come from any LSU fan’s closet. (Martin and his daughter Laura Kathryn, an LSU freshman, are the first father-daughter king and queen in the history of the event and were honored in the Lafayette hospitality suite with a proclamation from City-Parish President Joey Durel.) But a king is no ordinary LSU fan — particularly not this one. You can’t even imagine the excitement that night at the ball when 40 members of the LSU Marching Band, four Golden Girls and the drum major burst into the ballroom. Former Congressman Billy Tauzin literally jumped out of his box when the four tubas riffed their trademark “Bah….bah-bah…BAH!” King Martin not only covered travel arrangements for the band, but he also managed to keep its performance a complete surprise for his guests and the entire krewe.  Special thanks to krewe photographer Blane Faul for sharing his party pics. Party Girl’s evening-bag sized camera just didn’t do this event justice!

A giant touch-screen display was the centerpiece in Lafayette’s hospitality suite, touting our city’s high-tech market position. Dozens of volunteers glad-handed for hours, greeting the hundreds of visiting business and community leaders who stopped by to network and nibble. Jim and Patty Prince were particularly generous with their time that weekend, as were Brett and Donna Mellington, Jerry and Cheryl Trumps and The Independent’s own Odie Terry and his wife, Linda, a v-p at MidSouth Bank. The krewe has voted Congressman Charles Boustany to chair next year’s ball, but how can it possibly top this one?