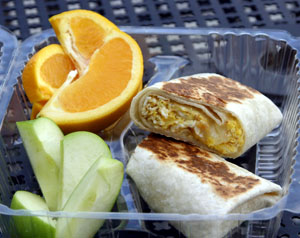 Alexander the Great may have attempted to conquer the world by force, but Nidal Balbeisi is busy doing it with food. The Lafayette restaurateur started his trademark restaurant, Zeus, on Pinhook, in 2001. Last week, he opened his sixth Zeus location on Camellia Blvd., in River Ranch. This Zeus, however, has an extra thunderbolt or two.

First of all, Balbeisi has bought a Subway franchise. So the restaurant is two-in-one: gyros for the adventurous, Footlongs for an All-American appetite. The River Ranch incarnation is a Zeus Express, Lebanese fast food, with comparable prices to Subway, nothing over $10, and the Zeus execution can match the Subway assembly line in speed.

What’s new to both restaurants is breakfast. Zeus is offering four freshly made omelets — bacon, sausage and potato, cheese, and vegi, each folded into a flat pita wrap that is lightly toasted. The crisp pita makes the omelets into finger food, possible for a fast get-away, although the vegi (my personal fav) is so stuffed with grilled onions and peppers that you’ll need a beach towel to preserve your white shirt if you’re trying to drive and chow down. On the Subway side, omelet sandwiches come in combos like western and cheese, double bacon and cheese and chipolte steak and cheese, encased in flatbread, sub loaves, or on a biscuit. A free cup of Community coffee or a soda is an added perk.

“We worked on this deal for a year,” says Balbeisi. Subway was very cautious about whom they would partner with. What jived for both businesses is the healthy aspect of the food, says Balbeisi. “We did a lot of research on customers. Both of our customers like to eat healthy.” The Zeus omelets are cooked in olive oil adding to their Mediterranean lifestyle appeal. And if you want to up the middle eastern flavor ante, ask for the addition of feta cheese in your omelet. Or do what one customer did this morning, skipped breakfast and went straight for the gyro at 8 a.m. That will put a little fire in the belly.